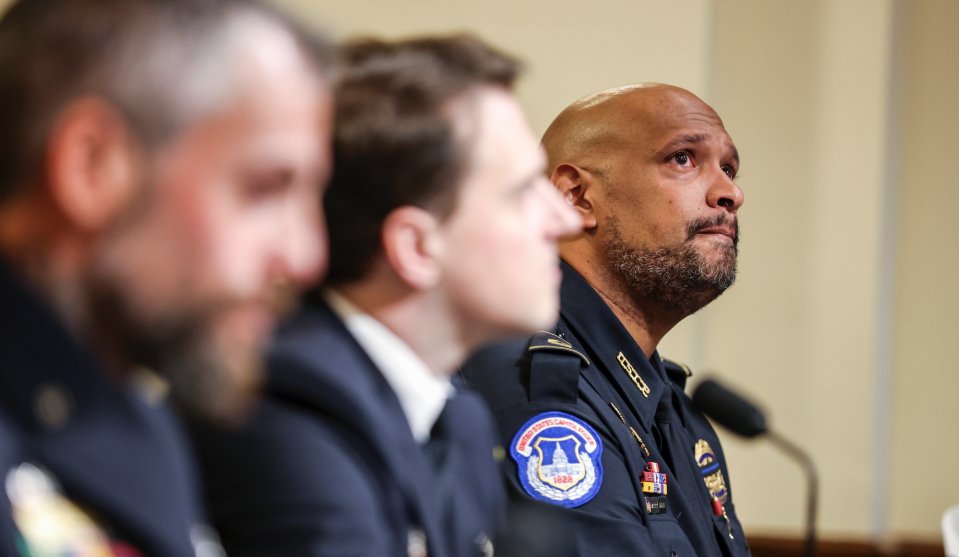 “You will die on your knees.”

“This nigger voted for Joe Biden.”

On Tuesday, at the first congressional hearing to investigate the January 6 Capitol insurrection, officers who defended the building that day recounted in their own words harrowing scenes of violence and the trauma they’ve continued to endure. Their powerful testimony was punctuated with emotion, as the four officers invited to speak before the special panel sometimes held back tears and voiced deep frustration at ongoing efforts by Republicans to downplay the abuse—abuse they testified had been overwhelmingly carried out by MAGA supporters—that still haunts them.

“I was grabbed, beaten, tased, all while being called a traitor to my country,” Officer Michael Fanone told lawmakers in his opening statement. “I was at risk of being stripped of and killed with my own firearm as I heard chants of ‘Kill him with his own gun.’ I can still hear those words in my head.”

Fanone continued, slamming the table at one point, “The indifference shown to my colleagues is disgraceful.”

Nowhere was that indifference more glaring than in that very room. After all, rather than participate in the first congressional hearing on the insurrection, nearly every House Republican boycotted Tuesday’s hearing, with leadership instead opting to stage a bizarre press conference where they blasted and blamed everyone from Nancy Pelosi to the movement to defund the police for the events of January 6.

“She’s an authoritarian who has broken the peoples’ house,” House GOP conference chair Rep. Elise Stefanik said of Pelosi shortly before the hearing. “She’s a lame-duck speaker and everyone knows it.”

“The American people deserve to know the truth,” she continued. “That Nancy Pelosi bears responsibility, as speaker of the House, for the tragedy that occurred on January 6.”

The remarks—while unsurprising considering Republicans’ efforts to block investigations into January 6 and their growing attempts to minimize the day as nothing more than a “normal tourist visit“—stood in dramatic contrast to the first-hand accounts offered by Officer Harry Dunn and Sgt. Aquilino Gonell, two members of the Capitol Police, and Officers Michael Fanone and Daniel Hodges of the DC Metropolitan Police Department.

“I too was being crushed by the rioters,” Gonell told lawmakers. “I could feel myself losing oxygen and recall thinking to myself, ‘This is how I’m going to die,’ defending this entrance.”

During one exchange, Wyoming Rep. Liz Cheney, one of only two Republicans on the panel, asked Gonell how he feels when he hears Trump describing the “love” among rioters. “If those are hugs and kisses, we all should go to his house and do the same things to him,” Gonell responded. “To me, it’s insulting, it’s demoralizing.”

Cheney and Illinois Rep. Adam Kinzinger were the only Republicans to participate in the hearing after House Minority Leader Kevin McCarthy withdrew his nominees last week. McCarthy has since described both of them as “Pelosi Republicans.”

"The indifference shown to my colleagues is disgraceful…Nothing, truly nothing, has prepared me to address those elected members of our government who continue to deny the events of that day, and in doing so, betray their oath of office." —Officer Michael Fanone pic.twitter.com/iaA8wbrKRg