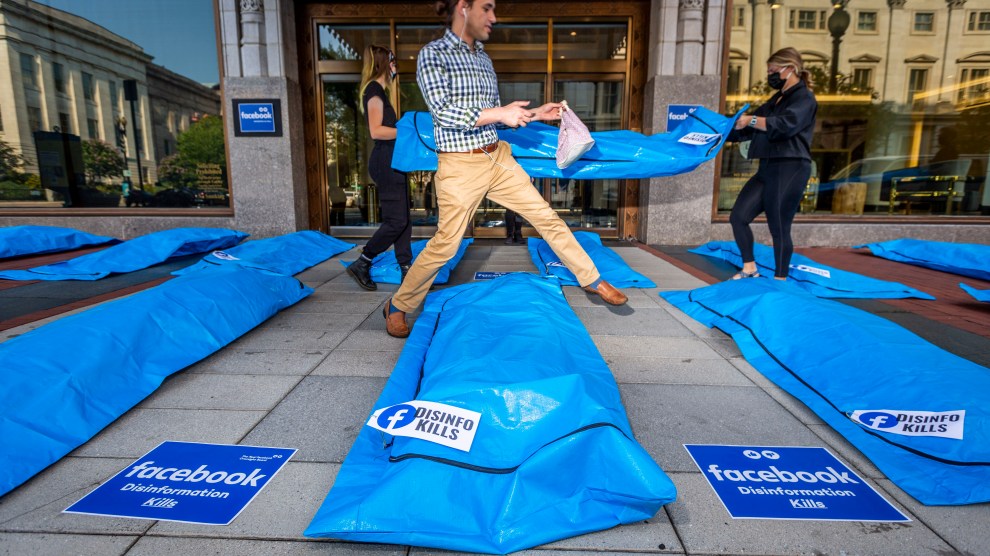 The Real Facebook Oversight Board is coming after the company again. Demonstrators from the non-profit backed civil society group showed up outside of Facebook’s DC office on Wednesday morning bearing body bags to make the case that “Facebook Kills”—a play on Joe Biden saying earlier this month that disinformation on the social media platform was “killing people.”

“President Biden was right,” said Imran Ahmed, CEO of the Center for Countering Digital Hate, explained in Wednesday statement. “Every day, there are avoidable deaths as a result of deadly propaganda which is designed to persuade people that vaccines don’t work and that COVID isn’t dangerous,”

The demonstration took place in conjunction with the Real Oversight Board’s release of a report about the company’s continued spread of disinformation, with two key findings: that through his Save America PAC, Trump is partially circumventing his Facebook ban, and that Facebook’s top stories are overwhelmingly coming from just five conservative sources.

HAPPENING NOW: In front of Facebook HQ in Washington DC 👀

The Real Facebook Oversight Board was established in response to Facebook creating its Oversight Board to weigh in on the company’s big content moderation decisions. Members of the so-called Real Oversight Board include Carole Cadwalladr, whose Cambridge Analytica investigations in the Guardian, the Observer, and the New York Times made her a finalist for the Pulitzer Prize, and Maria Ressa, a journalist currently facing imprisonment in the Philippines for cyber libel.

The Real Oversight Board’s demonstration pressed Facebook on two demands: to disable posts from superspreaders, like the so-called Disinformation Dozen, who are responsible for a vast amount of coronavirus disinformation, and to boost quality news sources as the platform did just after the 2020 presidential election.

“People are making decisions based on the disinformation that’s being spread on Facebook. If Facebook is not going to take that down, or if all they’re gonna do is put out disclaimers, then fundamentally, Facebook is participating in these deaths as well,” said Shireen Mitchell, a member of the Real Facebook Oversight Board and founder of Stop Online Violence Against Women.

In partnership with Media Matters, the liberal media watchdog, the new Real Oversight Board report found that even though Trump has been banned from Facebook until 2023, his PAC has run at least 251 ads on the platform just since June, with Facebook earning more than $15,000 in revenue from the Save America Joint Fundraising Committee. While many of these Trump posts include content labels applied by Facebook designed to fight disinformation, earlier Media Matters analysis has found that posts with labels are interacted with 2.6 times more than posts without them.

The report also found that Facebook, despite regularly claiming its content algorithms are unbiased, continues to be dominated by conservative posts. In the second quarter of 2021, 83 percent of days’ top performing posts were from the pages of just four right-wing celebrities—Sean Hannity, Ben Shapiro, Dan Bongino, and Franklin Graham—or from Fox News’ page. The analysis used Facebook’s own social media analytics tool, Crowdtangle, similar to how the New York Times’ Kevin Roose compiles daily lists tracking Facebook’s top 10 posts. Those rankings are frequently dominated by conservatives.