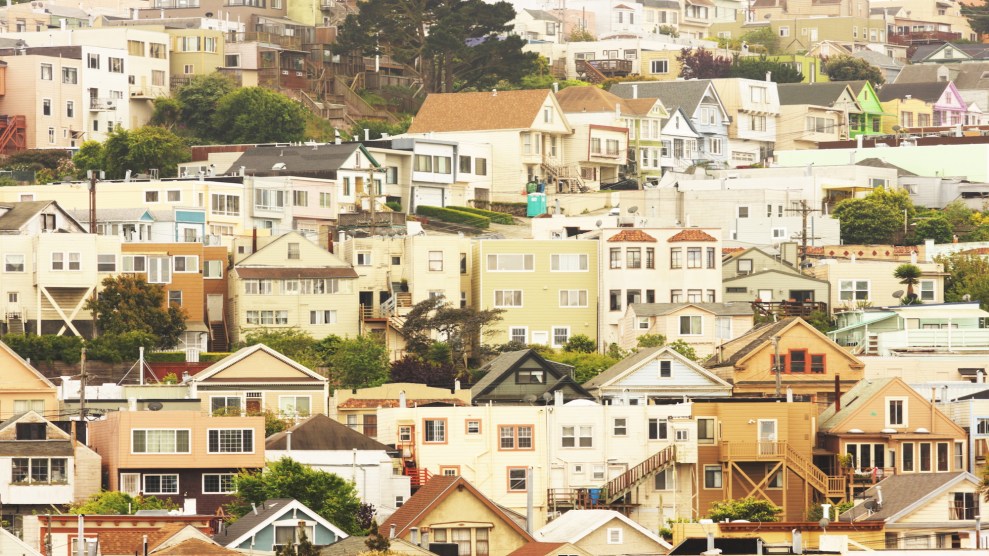 In San Francisco’s Sunset District, rows and rows of pastel-colored, two-story homes flow from the edge of Golden Gate park into the sand dunes of Ocean Beach. Many houses here have solar panels on their roofs and compost bins at their driveways, flanked by hybrid and electric cars.

Yet here—and all over this city—one major solution to both the housing crisis and the climate crisis has been met with fierce resistance: building more.

Climate scientists and urban planners increasingly suggest that one of the most impactful ways to slash greenhouse gas emissions is to make cities denser. This change, scientists have calculated, could work as well as or better than installing solar panels on all new constructions or retrofitting old buildings with energy-saving technologies. Residents of cities like San Francisco, Chicago, New York and Minneapolis already have much lower carbon footprints than in the surrounding suburban sprawl. City dwellers tend to have smaller apartments that require less energy to heat and cool.

But it also means a certain American way of life may have to end.

The quiet, tree-lined Sunset District has been roiling with controversy over the construction of a seven-story affordable housing unit. At tense community meetings, residents complain that the construction would block sunlight, drive up congestion and rustle up toxic dust. “Not in my backyard” demonstrators clashed at protests with progressive “Yes in my backyard” counter-protesters outside the proposed site. It reached a fever pitch early this year when anonymous leaflets appeared in neighbors’ mailboxes, charging: “No Slums In The Sunset.”

“It got ugly,” said Laura Foote, executive director of Yimby Action, a San Francisco-based housing advocacy group. Though the Sunset project was ultimately approved, she said similar battles over building more housing were playing out all over the city—and country.

“These issues have to be dealt with very carefully… If you build more density in the urban core it could end up in more sprawl.”

Efforts to make US cities more dense are also complicated by other countervailing trends, with the population growth of urban cores dropping in recent years as people seek out cheap space and now, in the wake of the pandemic, places more amenable to remote working, for those able to do it.

“A lot of cities are worried about affordable housing and gentrification so these issues have to be dealt with very carefully,” said Christopher Jones, a climate policy expert at the University of California, Berkeley. “Also, if you build more density in the urban core it could end up in more sprawl with growth, with people wanting larger, cheaper homes and then commute into these new vibrant centers. It’s a bit like pouring sand on to a map—it will keep spilling out.”

But compared with most European cities, urban areas in the US are typically sprawling and heavily dependent on cars—at just 283 people per square mile, the average American city is more than 100 times less densely populated than metropolises such as Paris or Barcelona.

As the tentacles of suburbs reach outwards from an urban core, public transit and even sidewalks often don’t follow and so more people rely upon their cars, with larger, and more polluting, SUVs becoming increasingly popular. Research has found that people living in neighborhoods that are walkable, unsurprisingly, drive a quarter less than those in more spread out areas.”

The default of car ownership in an age of escalating climate crisis has also led to the rise of Yimbyism in some progressive cities, around a vision of apartments packed close to public transit hubs and amenities. Meanwhile, the temporary shutdown of some streets to cars during the Covid pandemic has heightened calls for more space to be handed over to pedestrians, cyclists and rollerbladers, rather than vehicles, on a more permanent basis.

At a national level, Joe Biden has called for a “historic investment” in affordable housing, with his administration urging cities to change zoning laws to boost density and limit single-family housing developments, as well as rip up highways that have cleaved apart communities, typically communities of color, and added to air pollution.

But Jones said most suburbs in the US were “beyond hope” for public transit and that the focus should instead be on a “middle-out strategy,” where single-family plots close to city centers are divided up to accommodate additional residences, urban growth boundaries are put in place and jobs and services are spread more evenly around cities.

“Downtowns have jobs, shopping and schools, places that people want to drive to, but you need to have many cores, rather than just one,” he said. “Having everyone coming into one hub isn’t efficient. You need many hubs and different spokes in the wheel connecting them.”

“Climate change has become the broccoli that everyone wants to push around on the plate.”

California has made some strides as well. A bill that passed a few years ago has allowed developers to circumvent certain local planning and zoning ordinances if they build affordable housing—which is how the seven-story apartment building in the Sunset district that was met with so much controversy ultimately prevailed over neighborhood resistance. But broader upzoning bills have been defeated—often because such measures have failed to galvanize even progressives who supported the state’s groundbreaking goals for boosting renewable energy and cutting carbon emissions.

As drought, unprecedented heatwaves and raging wildfires grip the country, calls to build up cities and cut down carbon emissions have gained urgency. And pushes to build higher, amp up transportation and reform land use laws have gained new momentum.

“Climate change has become the broccoli that everyone wants to push around on the plate,” said Foote. “It’s easy to argue that one housing project won’t make the difference between averting climate change and global warming killing us—but really, we need to be saying yes to as many of these housing projects as we can in order to avoid climate catastrophe.”