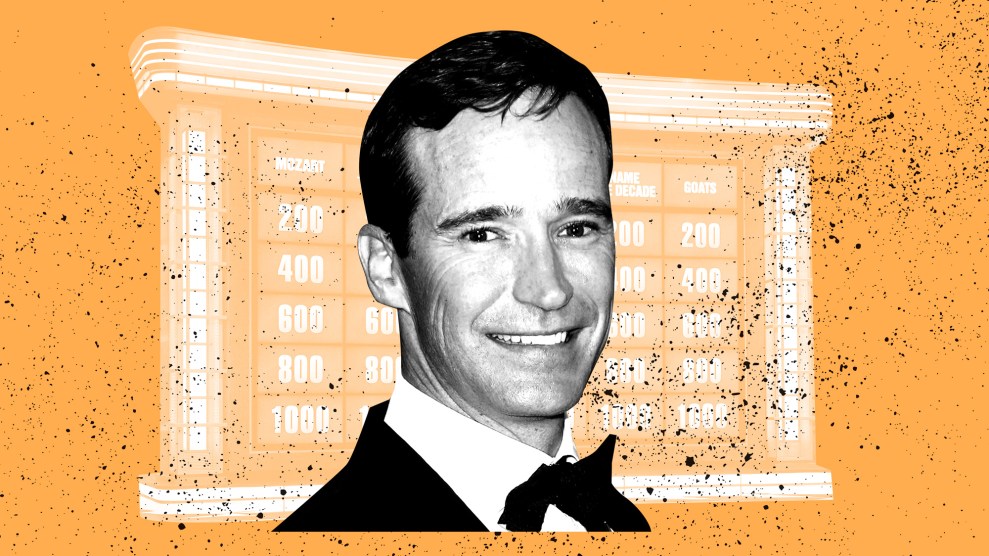 What’s…an iconic TV game show that has been plunged into chaos by corporate personnel decisions?

If that’s the correct question, the clue must have been Jeopardy! Back in August, the long-running quiz show finally named a successor to beloved host Alex Trebeck, who died of pancreatic cancer in 2020. Many fans had rallied around actor LeVar Burton for the job, but after a lengthy process overseen in part by the show’s executive producer Mike Richards, corporate overlord Sony settled on…Richards himself as the permanent host. To take the reins for Jeopardy!’s primetime and spinoff series, the conglomerate tapped The Big Bang Theory star Mayim Bialik. Since then, Bialik has come under heavy criticism for quackish public-health statements—and on Friday, Richards abruptly quit.

BREAKING: Mike Richards has stepped down as the host of Jeopardy! Official statement via Sony: pic.twitter.com/eJSwyBOXwN

Richards’ statement didn’t mention it, but a recent investigative piece by The Ringer’s Claire McNear (author of Answers in the Form of Questions: A Definitive History and Insider’s Guide to Jeopardy!) likely drove the decision. McNear’s reporting suggests that the network should probably have gone for someone like the popular Burton over, well, this guy:

Concerns about Richards extend to the Jeopardy! staff, with a source close to the show telling The Ringer that employees were blindsided by Sony’s announcement and multiple sources describing how staff morale has deteriorated under Richards’s watch as EP [executive producer]. Interviews with sources from Sony, Jeopardy!, and previous shows Richards has worked on, including The Price Is Right and Let’s Make a Deal, paint a picture of a showrunner who could be exclusionary and dismissive of longtime show employees—as well as someone who wasn’t shy about wanting to move in front of the camera. Says a former Deal employee who was at the show during Richards’s tenure: “When I worked there, it just seemed to be something everyone knew.”

While controversy over Richard’s ascension swirled, McNear reported, “multiple lawsuits” dating to his stint as executive producer of another major game show, The Price Is Right, gained attention.

One suit was filed in 2010 by Brandi Cochran, who worked as a model on the show. It centered on the discrimination and harassment she said she experienced after becoming pregnant. At the time, The Price Is Right had recently laid off several models; the suit says that after Cochran informed Richards of her pregnancy, he “said to her, ‘Go figure! I fire five girls … what are the odds?’” which Cochran understood “to mean that Richards would have selected her for layoff if he had known that she was going to get pregnant.” After giving birth, she learned that her contract had been terminated.

As for Bialik, my colleague Kiera Butler reported that for years she repeatedly promoted anti-vaccine positions (before ultimately supporting COVID-19 jabs); has “hawked a questionable supplement that claims to enhance brain function, including in an ad that’s on air right now”; engaged in a specious crusade against birth control pills; and in a 2017 New York Times op-ed, implied “that women invite sexual harassment by dressing immodestly.”

TV game shows have never been all fun and games behind scenes. Scandals have have regularly rocked the genre since its 1950s origins, and it’s not hard to make a rogue’s gallery from its long list of hosts. That said, on Friday, at least one fan favorite seemed to be enjoying the Richards drama from afar: