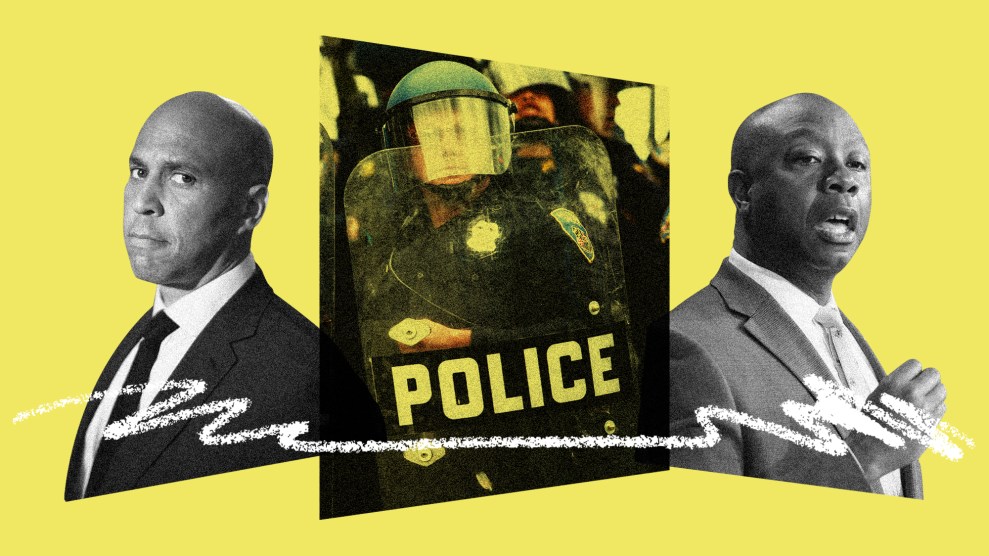 This week, two of only three Black US senators threw in the towel on congressional police reform—a perfect embodiment of both government dysfunction and the lack of real commitment to systematically overhaul the way the police functions in this country. When George Floyd, a 46-year-old Black man in Minneapolis, was murdered by Derek Chauvin, a white police officer, in May of 2020, massive racial justice protests swept the nation, and Republicans and Democrats agreed that something must be done. The only question was what? That was up to Sens. Cory Booker (D-N.J.) and Tim Scott (R-S.C.) to find out. It’s taken more than a year, but we finally have the disappointing but completely unsurprising results: Nothing.

During the time they were at work, the coronavirus spread, vaccines became available, Joe Biden was elected president, months of lies and political instability followed culminating in the January 6 attack on the Capitol. Still, they negotiated and reassured the public that they were close to a deal. Then, as Congress was embroiled in high-stakes negotiations on keeping the government open, raising the debt limit, and voting on Biden’s sweeping agenda, the talks collapsed for good. Scott falsely announced that the problem was that Democrats wanted to defund the police. “I’m not going to participate in reducing funding for the police after we saw a major city after major city defund the police,” he said on CBS’ Face the Nation. “Many provisions in this bill that he wanted me to agree to limited or reduced funding for the police.”

“I’m not going to participate in reducing funding for the police after we saw a major city after major city defund the police.”

The timing may not have been an accident. Perhaps Scott seized the opportunity to declare this whole effort was impossible and blame Booker for something he patently did not do at just the moment when the Democrats were publicly divided and a lot was on the line. If one were to be cynical, could he have been waiting just for a moment like this? Or was the failure a question of a well-intentioned GOP senator who simply lacked the political capital to achieve his goal and then decided to claim a convenient, though, again, false, reason for the collapse?

Tim Scott likes to present himself as someone who makes every effort to rise above petty partisan politics. After all, he talks a big game about compromise and bipartisanship. In his 2018 book Unified: How Our Unlikely Friendship Gives Us Hope for a Divided Country, which he co-wrote with friend and former South Carolina Republican Rep. Trey Gowdy, Scott writes: “One thing I’ve noticed during my time in Congress is that members who differ on particular issues may try to come up with policy proposals and legislative remedies without first agreeing with their opponents on the nature of the problem they’re trying to solve.” So was the only problem that Booker and Scott just didn’t understand what their ultimate objective should be? If so, why bring up defunding the police?

When Floyd was killed by police, the country was still grappling with the early stages of the pandemic and the flames of racial and social tensions were being stoked by former president Donald Trump. Scott doesn’t hold back from telling stories about his own run-ins with police as a Black man. In a passionate floor speech in 2016, Scott described being stopped by police seven times in one year—including an incident where a police officer implied that he was driving a stolen car. “We’re driving down the road, and the blue lights come on. Officer pulls me into the median, and he starts telling me that he thinks perhaps the car is stolen,” the senator said. “I was looking for some rational reason that may have prompted him to stop me on the side of the road.” He also acknowledged a certain universality in his experience of Driving While Black, adding, “I do not know many African American men who do not have a very similar story to tell no matter the profession, no matter their income, no matter their disposition in life.”

During the summer of the racial reckoning in 2020, Scott sought the nearly impossible balance of empathy for victims of police brutality while staying on the good side of an increasingly unhinged racist president. And that balance was even more difficult given his party’s only fleeting interest in police reform. Unless the cops in question happen to be protecting the US Capitol from marauding Trump supporters, the GOP sees itself as the party heartily in favor of law enforcement—and so does their base. After some initial enthusiasm for the movement, support for Black Lives Matter is at an all-time low. So, what do you do when you’re trying to play the role of bipartisan negotiator while also appealing to a base that bristles at criticism of police? First, you walk the fine line. Then you abandon ship.

Scott first introduced the JUSTICE Act in June 2020. Criticized for its limited scope by liberals and Senate Democrats, who subsequently blocked it, the bill mandated that states begin collecting more data about the use of force and “no-knock” warrants, document police misconduct, and called on the Department of Justice to create guidance for police de-escalation tactics.

Meanwhile, the Democrats had their own measure that sought to do those same things but went further, including a federal chokehold ban and limiting qualified immunity, a legal maneuver that makes it difficult to sue police for misconduct. While Scott and Booker, and Rep. Karen Bass (D-Calif.) debated the merits of various proposals, several more high-profile police killings occurred, including the deaths of Rayshard Brooks in Atlanta, Daunte Wright in Brooklyn Center, Minnesota, and Andrew Brown Jr. in Elizabeth City, North Carolina.

Soon after Floyd was killed, the leftist policy proposal known as defunding the police, went mainstream. The concept is not to disband police departments, but to remove some funds from police departments and redirect them for use on other social services. The idea took on a life on its own when Republicans, conservatives, and other assorted right-wing pundits began claiming Democrats supported it and wanted to disband police departments entirely. I don’t know how many times it has to be said—clearly, it still does given Scott’s recent performance—but the police have not been defunded. Even if politicians wanted to, which they don’t, Congress doesn’t even have the power to do so! And, perhaps most importantly, Democrats are opposed to defunding the police. (The Democratic proposals call for increases in funding for police for mental health initiatives and training.)

“There’s some people who said there are members of this deliberative body that want to defund the police to my horror, and now this senator has given us the gift that, finally…we can put to bed this scurrilous accusation.”

In fact, Scott was present when his Democratic counterpart in the negotiations made his party’s position abundantly clear. Last month, Sen. Tommy Tuberville (R-Ala.) introduced an amendment to a spending package that called for cutting federal aid to any city that defunded its police. In an embarrassing attempt to make Democrats appear to support defund the police, Tuberville said, “Opposing my amendment is a vote in support of Defunding the Police and against our men and women in blue.” Booker jumped at the opportunity to respond saying,  “There’s some people who said there are members of this deliberative body that want to defund the police to my horror, and now this senator has given us the gift that, finally once and for all, we can put to bed this scurrilous accusation.”

The measure passed 99-0. And given what has been going on in the Senate recently, this is something of a miracle.

So, what is Scott talking about? The Democratic proposal in question included language about giving law enforcement agencies grants only after they met certain standards in bias training, no-knock warrants, and other stipulations. It’s a clear-cut case of incentivizing police departments to reform. And if this proposal sounds familiar, it’s because it’s fairly similar to a Trump executive order from June 2020 and was once a GOP position.

But when you’re not serious about reforms, a Republican idea can turn into a radical leftist position swiftly.

Although we’ve spent more than a year waiting for this police reform bill, it was always going to end up this way. The Republican Party has blithely turned everything from wearing a mask during a deadly pandemic to obscure academic theories into a culture war. They’ve taken Democratic positions on a wide variety of issues, distorted them beyond recognition, and turned them into yet another boogeyman to keep you up at night. In this case, it’s a lesson in how even the most moderate reforms turned into a predictable Democrats-hate-the-police trope. And Scott, who may be less reactionary than many of the more visible elected representatives in his party, who is even charismatic and tends to shy away from the type of owning-the-libs posting some of his colleagues do, apparently couldn’t help himself this time.

The final chapter of Scott and Gowdy’s book is titled “Let’s Talk About Solutions.” Here the two South Carolina Republican politicians pretend to have managed to bridge great ideological gulfs—what could they possibly have been?—through finding common ground. They point out that the real problem with politics is that each political party isn’t telling the truth about the other side’s motivations. “So, for me, it’s not so much about how we vote, but how we frame the other side’s intentions on most issues,” Scott lamented in his section. “Unfortunately, in our increasingly polarized, 24/7 news environment, opponents are often vilified, and their motives are called into question.” Now, who could he possibly be referring to?