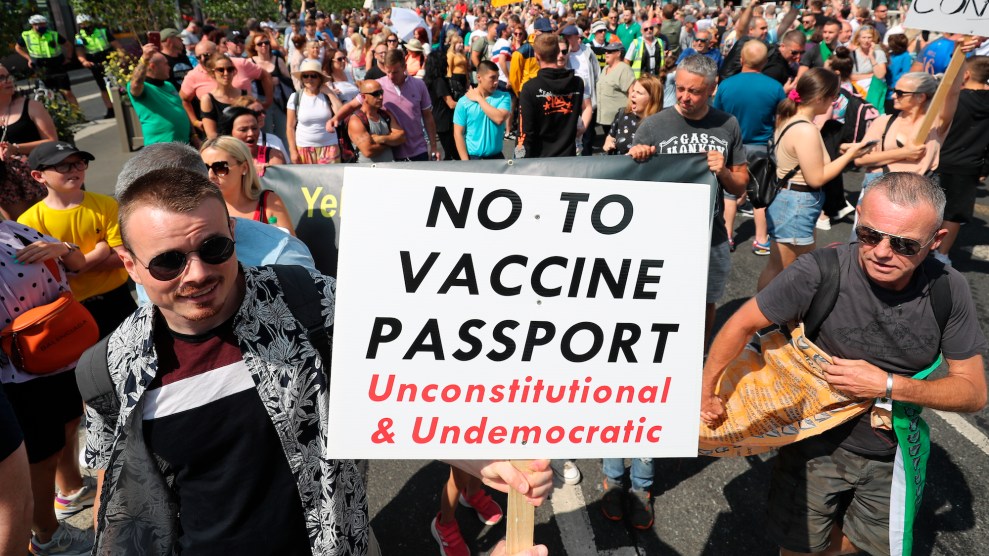 Simone Gold is one of the Capitol insurrection defendants being celebrated at a scheduled “Justice for J6” rally in DC on Saturday as a “political prisoner” by the pro-Trump rally organizers. But the controversial doctor and lawyer won’t be able to make the event, which has law enforcement girding for possible violence. Like many of the people arrested for allegedly storming the US Capitol on January 6, her pretrial release conditions bar the California resident from visiting DC for anything but a court hearing or a meeting with her lawyers. Instead, Gold will be headlining an anti-vaccine rally in San Francisco, one of hundreds planned around the world to protest vaccine and mask mandates and further lockdowns designed to slow the Covid-19 pandemic.

The international anti-vax rallies promise to dwarf the turnout for Saturday’s J6 event. The World Wide Rally for Freedom will be at least the fourth major international anti-vaccine protest since July organized by a conspiracy-mongering German group known as Freie Bürger Kassel (Free Citizens of Kassel), which spearheaded the hashtag #WewillALLbethere back in March. The July protests drew hundreds of thousands of people, notably in France and Australia, where violence broke out and several people were arrested. A Telegram channel for the organizers has nearly 75,000 subscribers, and Gold’s participation at one of the events on Saturday suggests that the US participation in the day’s protests could be significant. Rallies are scheduled in Salt Lake City, Las Vegas, New York, Houston, Georgia, Chicago, Washington State and 180 other cities around the globe in 45 countries, according to organizers.

#wewillALLbethere . Join the world wide rally for freedom at a city near you. Ay'khale!! pic.twitter.com/oTFZq9AnfC

Gold’s appearance in San Francisco is the latest stop on her “Uncensored Truth” tour, which she kicked off in May with a press release explaining: “Doctors, nurses, business owners and patients across the country have been intimidated by politicians and public health bureaucrats for wanting alternatives to dangerous lockdowns, unproven Big Pharma vaccines, and restrictions on freedom that are not based on science. We will not be canceled. This tour will help advance that critical conversation and empower people with information.”

Her group, America’s Frontline Doctors, has been a major source of Covid-19 misinformation over the past year, starting with their “White Coat Summit” in July 2020, when she and a group of white-coated doctors stood on the steps of the Supreme Court to tell the world that masks don’t work, that Covid could be cured with President Trump’s favorite anti-malaria drug, hydroxychloroquine, and that Americans had little to fear from a virus that even then had already killed more than 140,000 Americans. (None of that is true, of course.) Trump and his son Don Jr. retweeted a video of the event that went viral and racked up nearly 20 million views before Facebook, Twitter and other social media companies took it down for spreading misinformation. Both the presidential tweet and the ensuing “Big Tech censorship” turned Gold into a far-right luminary, particularly with the anti-vax crowd, a phenomenal rise I catalogued in my Mother Jones profile of Gold, published in May.

She is touring the country spreading her message of “health freedom” while awaiting trial on charges related to her alleged role in the riot at the US Capitol on January 6. That day, she joined with the other Trump supporters in the mob that entered the Capitol hoping to overturn the results of the 2020 presidential election, going so far as to grab a bullhorn to address the crowd. According to an FBI agent, Gold and John Strand, an international underwear model and her group’s spokesman, were photographed “in a large crowd attempting to push past multiple officers blocking the entrance to the Capitol, which had visibly broken windows at the time. One of the officers, who had been pinned near the doors to the Capitol, appears to be pulled down by someone in the crowd and lands near where Strand and Gold were standing.” Videos and still photos also show the pair pressed up against the door to the House chamber where law enforcement was trying to block them.

Gold has been indicted and charged with five criminal counts, including entering a restricted building and obstructing an official proceeding. Supporters will have to cheer her on at the J6 rally in DC without her.