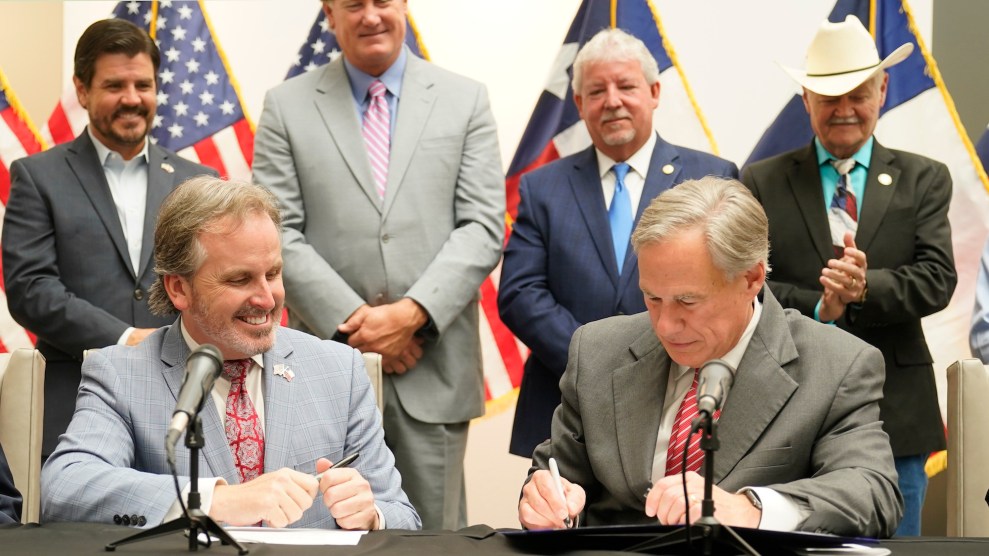 In recent weeks, the GOP-controlled Texas legislature has passed some of the country’s most unpopular and divisive policies: a six-week ban on abortion enforced by citizen bounty hunters; a prohibition on teaching students about “critical race theory” and the 1619 Project; and a sweeping voter suppression law targeting communities of color. Despite the national outcry, Texas Republicans seem unconcerned about a backlash in their home state. Here’s why: They know they can choose their own electorate rather than the electorate choosing them.

As Texas becomes more diverse, urban, and Democratic, lawmakers reconvened in Austin on Monday for another special legislative session to draw new redistricting maps for the next decade that will concentrate power in the hands of politicians who represent constituencies that are far whiter, more rural, and more Republican than the state as a whole.

Texas has an appalling history when it comes to redistricting. Since the state was covered by the Voting Rights Act in 1975, federal courts have objected to its redistricting maps every decade for discriminating against Black and Latino voters. During the last redistricting cycle, Republicans went to spectacular lengths to gerrymander the state: Though 90 percent of its booming growth from 2000 to 2010 came from communities of color, three of the four congressional seats gained because of this demographic change were drawn to elect white Republicans. Although Latinos constituted two-thirds of the state’s growth, the number of majority-Latino congressional and legislative districts actually declined, an example of what the League of Women Voters called in 2011 “by far the most extreme example of racial gerrymandering among all the redistricting proposals passed by lawmakers so far this year.”

“What happens in redistricting remains to be seen, but if the past is any indication, Texas will try to use redistricting to thwart the political power of Latinos, African-Americans and Asian-Americans.”

There’s every reason to believe history will repeat itself in 2021, especially since this is the first redistricting cycle in five decades where Texas will not have to get federal approval for its redistricting maps after the Supreme Court gutted the Voting Rights Act in 2013. “I’m concerned Texas will repeat the errors of the past,” says Nina Perales, vice president of litigation for the Mexican American Legal Defense and Educational Fund (MALDEF).

Indeed, lawmakers who were found guilty by the courts of intentional racial gerrymandering in the last redistricting cycle will now play a central role in drawing the new maps. One of them is GOP state Rep. Todd Hunter of Corpus Christi, known as the “the man in black” for his all-black attire, who is now chair of the House Redistricting Committee.

Before 2010, Corpus Christi’s Nueces County had three state House seats, two where Latino voters could elect their preferred candidates and one where white voters had a majority. Because it grew more slowly than the rest of the state, the county lost a state House seat during the last round of redistricting. Civil rights groups, including MALDEF and the Mexican American Legislative Caucus, submitted testimony that two majority-Latino districts could be drawn in the county. Instead, Republicans moved the seat they lost—which was previously a Latino district—to a white Republican area outside Dallas, packed most Latino voters into one district in Nueces County, and kept Hunter’s district whiter than the county as a whole to preserve his seat and the GOP’s advantage in the state House. “There is evidence that the mapdrawers (including specifically Rep. Hunter) racially gerrymandered the districts that remained in Nueces County to further undermine Latino voting strength,” a federal district court ruled in 2017.

According to the court record, Hunter drew rival Latino candidates, both Democrats and Republicans, out of his district, added in Latino communities with lower turnout rates so they wouldn’t vote him out of office, and underpopulated his district compared to the adjoining one so there would be fewer Latino voters overall. (In 2018, the Supreme Court, in a 5–4 decision, overruled the lower court and upheld the maps with one exception, writing that the legislature was entitled to a “presumption of good faith.”) Hunter’s elevation to chair of the redistricting committee “sends a clear signal that Republicans will attempt to draw maps that silence the voices of Black and Brown voters,” the Texas Democratic Party said earlier this year.

The state House and congressional maps have yet to be released, but proposed state Senate maps released over the weekend illustrate the extreme gerrymandering the GOP has planned. Though 95 percent of Texas’ population growth came from communities of color over the past decade and whites are now a minority in the state, 20 of 31 Senate districts still have white majorities. Despite gaining nearly 2 million Hispanic residents and more than 500,000 Black residents, Republicans didn’t draw a single new majority-Latino or majority-Black district. The number of pro-Trump districts actually increases under the plan, from 16 to 19.

In fact, Republicans are planning to dismantle the diverse areas that are the future of the state. Democratic state Senator Beverly Powell currently represents a swing district in Tarrant County, west of Dallas, where fast-growing communities of color make up a near-majority of the population. But under the new Senate map, Republicans extended the district to include two adjoining predominantly white exurban and rural counties, undermining the influence of voters of color and boosting Trump’s vote share in the district by 10 points. Powell called it “a direct assault on the voting rights of minority citizens in Senate District 10 and, if adopted, it would be an act of intentional discrimination.”

What Texas Rs are attempting to do to State Senate District 10 says a lot about where Rs find themselves now. Current district on left; proposed district on right. #txlege 1/ pic.twitter.com/np0G2vo5m3

The state’s recently enacted voter suppression law and the gerrymandered maps go hand in hand, sharing the goal of preventing the state’s changing demographics from leading to a shift in political power for as long as possible. “The voter suppression law is an attempt to slow down the inevitable change in the Texas electorate,” says Perales. “Texas is becoming more racially diverse and that racially diverse population is younger and predominantly Latino and this voter suppression law is a reaction to and attempt to thwart the diversification of the Texas electorate. What happens in redistricting remains to be seen, but if the past is any indication, Texas will try to use redistricting to thwart the political power of Latinos, African-Americans and Asian-Americans.”

But gerrymandering is even more effective than voter suppression efforts, and the prime way the GOP intends to keep the legislature under the control of white Republicans for the next decade, even as the state’s population shifts away from the party. “If voter suppression is like death by a thousand cuts, gerrymandering is like a nuclear bomb going off,” says Michael Li, an expert on redistricting at the Brennan Center for Justice.

The Freedom to Vote Act introduced by Senate Democrats last week would ban the kind of racial and partisan gerrymandering pushed by Texas Republicans. Yet Democrats have mere weeks to pass it before Republicans enact new maps (some states, including Ohio, already have) and do not yet have a plan to overcome unified GOP opposition.

“My big concern right now—for both the anti-voter law and redistricting—is that we need national standards from the Freedom to Vote Act,” says Democratic state Rep. Rafael Anchía, a member of the redistricting committee. “We have to be willing to either reform the filibuster or get rid of the filibuster in order to protect democracy.”