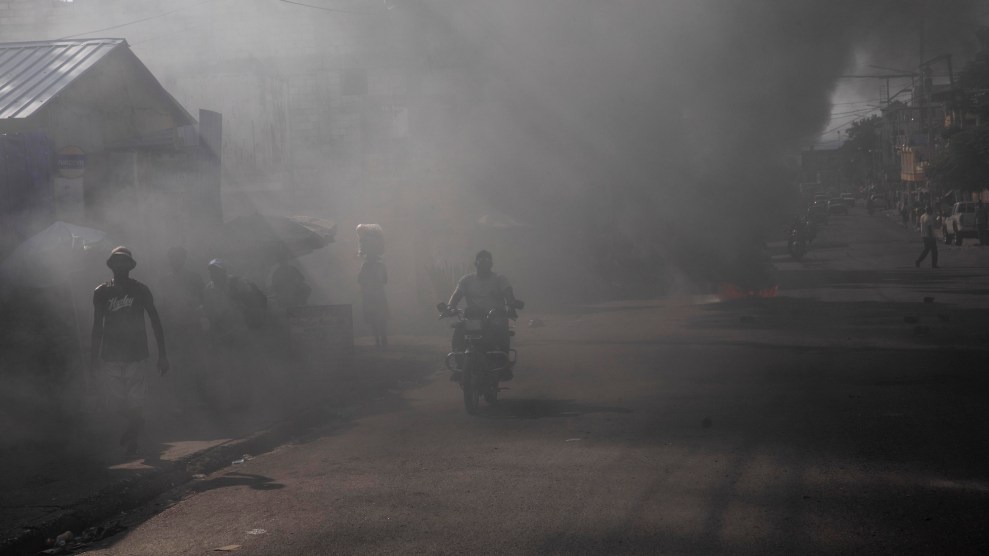 People walk amid smoke that came from burning tires during a protest organized by friends and relatives of Biana Velizaire, 27, who was kidnapped for five days by gang members in Port-au-Prince last month.Rodrigo Abd/AP

A gang kidnapped seventeen people, including three minors, associated with an American Christian aid group in Port-au-Prince on Saturday. The American missionaries were kidnapped less than a month after the Biden administration expelled thousands of Haitians under a Trump-era border policy. The attack is a reminder that the disaster-ravaged country is now no longer safe for anybody: presidents, foreign missionaries, much less, ordinary citizens.

Details are still emerging about the kidnapping. Dan Hooley, a former field director with Christian Aid Ministries, told the New York Times that all of the adults who were kidnapped were employees of the Ohio-based aid group. The Times reports that, by some estimates, gangs now control roughly half of Port-au-Prince. Gangs have been using kidnappings as ways to collect ransoms that range from as little as $100 to six-figure sums, according to the Washington Post. It’s not yet been reported how much ransom the people responsible for Saturday’s abductions may be demanding.

Saturday’s kidnapping is likely to draw disproportionate attention because the victims are Americans. But kidnappings have become an increasingly regular feature of life in Haiti. The Post reported earlier this month that Port-au-Prince now has the highest per capita kidnapping rate in the country:

Recorded kidnappings so far this year have spiked sixfold over the same period last year, as criminals nab doctors on their way to work, preachers delivering sermons, entire busloads of people in transit—even police on patrol. So great is the surge that this year, Port-au-Prince is posting more kidnappings in absolute terms than vastly larger Bogotá, Mexico City, and São Paulo combined, according to the consulting firm Control Risks.

These kidnappings have occurred against the backdrop of a crisis involving Haitian migrants. In September, thousands of Haitians, many of whom had fled Haiti years before and settled in Latin America, began camping near the Del Rio, Texas, border crossing. In normal times, they would have been allowed to request asylum and go before an immigration judge in the United States. Instead, the Biden administration relied on Title 42—an obscure public health provision invoked by the Trump administration during the pandemic—to summarily expel most of them. As my colleague Isabela Dias has reported:

The policy, which President Biden has so far upheld, has resulted in hundreds of thousands of immediate expulsions. Because these expulsions don’t trigger prosecution for illegal reentry, migrants are attempting multiple crossings, seeking out more remote and perilous sections of the border. Humanitarian groups say these efforts to avoid detection and near-certain expulsion increase migrants’ chances of needing to be rescued—or of dying.

The Biden administration has put thousands of Haitians on flights back to the country without providing any semblance of due process. Moreover, many of those on the flights had left Haiti years ago and now have children who were born elsewhere. Fifty-seven expulsion flights arrived in Haiti between September 19 and September 30, according to Witness at the Border, an organization that has tracked deportation flights during the Trump and Biden administrations. “Never before, since we began recording in January 2020, has a country received this many removal flights in one month, much less in 12 days,” the group wrote in a recent report.

Along with keeping Title 42 in place over the objections of immigration advocacy groups, a recent court order requires the Department of Homeland Security to bring back a Trump policy known as Remain in Mexico, which forces asylum seekers seeking protection in the United States to wait in dangerous Mexican border cities before seeing a US immigration judge. (There have been more than 1,500 reports of migrants being targeted by gangs while they wait for their hearings.) During a visit to the border in 2020, now First Lady Jill Biden called the policy emblematic of “man’s inhumanity to man.”

The Trump Administration’s Migrant Protection Protocols force asylum seekers to wait months in Mexico rather than in the safety of the United States. This makes them targets for extortion, sex-trafficking, and kidnapping, leaving them without a safe place to live. pic.twitter.com/Q3KKpAKalj

What will happen to the missionaries who’ve been abducted is unclear. One official who won’t be around to help negotiate their release is Ambassador Daniel Foote, the former Special Envoy to Haiti who resigned last month in protest of the Biden administration’s treatment of Haitians at the US-Mexico border.

“I will not be associated with the United States [sic] inhumane, counterproductive decision to deport thousands of Haitian refugees and illegal immigrants to Haiti,” Foote wrote in his resignation letter, “a country where American officials are confined to secure compounds because of the danger posed by armed gangs in control of daily life.”