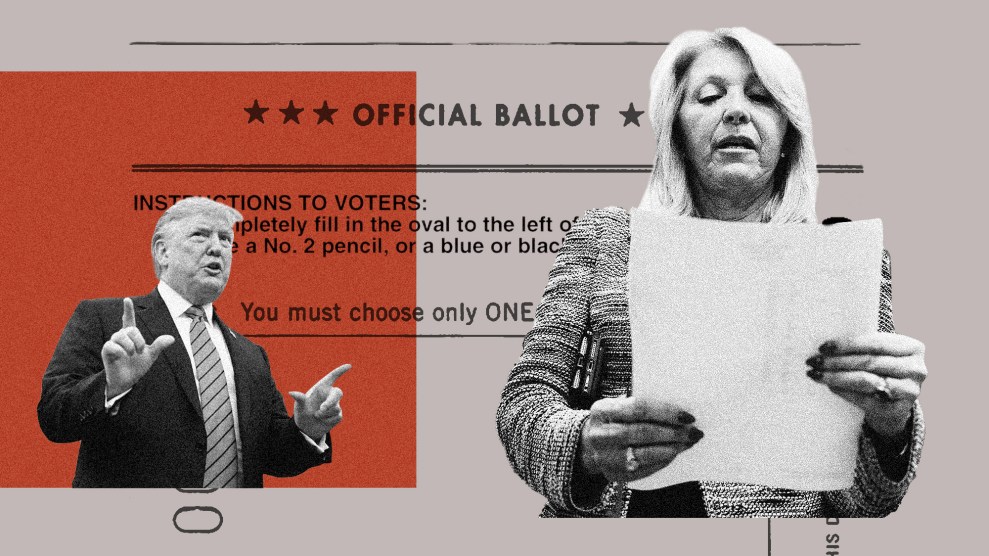 With a wooden cross towering behind her, Mesa County Clerk and Recorder Tina Peters took the stage on September 16 at the Appleton Christian Church. The crowd came to its feet, shouting cheers and chants of “Tina! Tina! Tina!” The moment was a triumphant return for the western Colorado community’s top elections official after weeks in self-imposed hiding.

“This is all for you,” she said. “You’re the ones who came to me and said ‘Something is not right, will you please check into it.'”

The remarks were her first public appearance in the county in over a month. Peters, who is under local, state, and federal investigation for allegedly enabling an election security breach, had disappeared after speaking at a pro-Trump 2020 conspiracy event hosted by MyPillow founder Mike Lindell on August 10, claiming she feared for her safety.

A Republican colleague says Peters committed a “selfish act that jeopardizes the conduct and integrity of elections.”

At the church, she complained her search for answers about the 2020 vote had been met with resistance from “powerful people” who “don’t want us to look at the facts,” and who were now trying to remove her “just for doing my job.” The Republican-elected official ended her remarks with a plea for donations.

Peters has become a “minor celebrity,” as a recent Washington Post article put it, in the world of Trump-fans working to sustain the big lie that he won the 2020 election. But Colorado Secretary of State Jena Griswold and the Republican head of the state’s county clerks’ association says Peters’s efforts to prove that the election was not secure have not only damaged trust in elections, but themselves facilitated a serious breach of election security protocols. As a result, Griswold decertified 41 Mesa county machines, which will have to be replaced. Griswold, a Democrat, has filed a lawsuit to suspend Peters and her deputy from overseeing elections.

The tumult in this western Colorado county portends a growing post-2020 issue, as local elected officials with responsibility for overseeing elections are increasingly undermining faith in elections, pushing false claims, and even breaching security protocols. Steve Bannon, a former adviser to Trump and a leading proponent of his big lie, has encouraged like-minded people to take over key, hyper-local, election administration roles. There are thousands of these positions nationwide—ranging from town or county clerks to the boards that certify elections—where dedicated conspiracists could wreak havoc. At a higher level, Trump has endorsed secretary of state candidates in multiple states for the 2022 elections who back his election lies. According to a Reuters analysis, nearly a dozen Republican contenders for these chief election administrator positions in five battleground states openly question the validity of the 2020 election. “It is incredibly dangerous to support people for office who do not accept the legitimacy of the 2020 election,” Rick Hasen, a voting-rights expert and professor of law and political science at the University of California, Irvine, told CNN. “It suggests that they might be willing to bend or break the rules when it comes to running elections and counting votes in the future.”

Griswold, who chairs the Democratic Association of Secretaries of State, told Mother Jones that next year’s elections give voters a critical chance to control who runs balloting. “I believe that this insider threat will spread into 2022,” she warns. “It’s very concerning to have to worry that people who are in places of trust to oversee elections may not believe in the right to vote or in democracy.”

The investigations targeting Peters, along with deputy clerk Belinda Knisley, surround evidence that they allowed a non-county employee to make a copy of Dominion voting machine software before a routine update in late May 2021. State officials say Peters and Knisley lied to get the person on-site access and ordered surveillance cameras be turned off while they were there. Copies of the hard drive, and of a video that was surreptitiously taken anyway during the software update, were then posted online by conservative election conspiracy theorists seeking to bolster false notions that the 2020 election was stolen from former President Trump with the use of rigged voting equipment from Dominion, one of the country’s major election vendors.

In August, the county commissioners hired a former Republican Secretary of State, Wayne Williams, to temporarily run elections. In a court filing contesting Griswold’s ongoing attempt to strip Peters of her duties, an attorney representing Peters admitted she arranged the access and had the cameras turned off, but argued she had acted to “prevent fraud and corruption in elections.” Peters did not respond to requests for comment.

Files purported to have been from the hard drive were analyzed on stage as part of Lindell’s “Cyber Symposium,” an event where he promised to present evidence that Chinese hackers, in cahoots with Dominion, had stolen the election. While Peters spoke at the event, she denied providing the files, claiming that if they had come from her office, they must have been taken during a “raid.”

Shortly after the breach was exposed, Matt Crane, a former Republican county clerk and executive director of the Colorado County Clerks Association, told reporters that Peters had committed a “solo, intentional, and selfish act that jeopardizes the conduct and integrity of elections in Mesa County, and affects the confidence of voters throughout the state and the nation.”

Mike Beasley, a lobbyist representing the association, told Mother Jones that a community’s trust can be shattered when a clerk violates their oath, “and that’s, in our view, very strongly what happened here.” Clerks perform many duties, he says, and the public relies on them to safeguard data.

The way to head off such situations, he added, is continued transparency and public outreach about how elections work, what the procedures are—things as basic as inviting the public to volunteer as election workers.

“We just have to keep doing that,” he said. But for every person, Beasley says, who is “driven by their hatred for the government and the suspicion around it, there are 20 people who don’t believe that. Facts will win the day. Our actions will win the day, and the hearts and minds. I’m old and I’m a nerd, but I do believe that.”

There’s evidence Colorado may be home to other local election officials in cahoots with people who deny Trump’s loss. The Colorado Times Recorder, a progressive news site, recently reported on a January 22, 2021 email that surfaced in a lawsuit filed by a Dominion employee against Trump, his attorney Sidney Powell, and Joe Oltmann, a Colorado-based election conspiracist. Long before Peters breached security protocols in service of the big lie, Oltmann wrote Powell to claim that “several county clerks” were cooperating with him in the state. He later told the Times Recorder Peters wasn’t one of them—but boasted that “there is so much more to come out.”