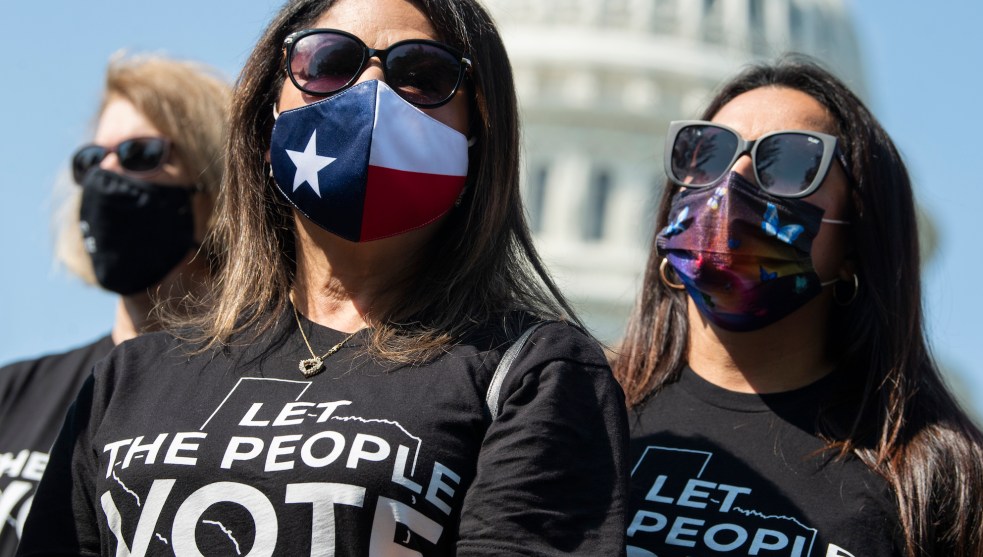 It took Texas Republicans less than 30 days to pass redistricting maps for Congress and the state legislature that will help them retake the US House in 2022 and entrench control of state politics for the next decade. Meanwhile, it’s been 230 days since the House of Representatives passed federal legislation—the For the People Act—that would roll back the gerrymandering and voter suppression enacted by GOP-controlled states such as Texas, but the Senate has taken no action to protect voting rights while Republican-dominated states relentlessly undermine them.

Senate Majority Leader Chuck Schumer has scheduled a vote on his party’s new voting rights bill, the Freedom to Vote Act, for Wednesday but there is still no plan for overcoming a GOP filibuster to pass it. To understand the high costs of inaction, look no further than Texas.

One month after passing one of the country’s worst voter suppression laws, Texas Republicans enacted new redistricting maps that lock in power for white Republicans by denying fair representation to communities of color.

“The partisan effects of the map are achieved by discriminating against communities of color.”

Ninety-five percent of the state’s population growth in the last decade came from communities of color, but, in an astonishingly brazen effort to forestall these demographic changes, the new redistricting maps for the state legislature and US House increase the number of districts with white majorities—overwhelmingly held by Republicans—and decrease the number of districts with Hispanic and Black majorities.

“The partisan effects of the maps are achieved by discriminating against communities of color,” says Michael Li of the Brennan Center for Justice.

The maps consolidate white power as the white population is shrinking as a percentage of the state, and eliminate political competition at a time when longtime GOP strongholds are trending blue. The number of safe GOP seats would double in the new congressional maps, from 11 to 22, and the number of competitive districts would fall from 12 to just one. GOP candidates for Congress received 53 percent of the statewide vote in 2020, but are forecasted to control 65 percent of US House seats under the new map.

This stranglehold on power will embolden Republicans to continue to pass extreme and unpopular policies, like the six-week abortion ban, permission to carry guns without a permit, and the sweeping voter suppression bill enacted in the last year.

Some of the most egregious examples of gerrymandering are achieved by targeting diverse communities and those who represent them.

Dismantling competitive districts in once-reliably Republican suburbs where Hispanic, Black, and Asian American voters are electing their preferred candidates or are on the verge of doing so is a defining feature of the new maps. A prime example, which I wrote about last week, is Texas’ 24th Congressional District, stretching from Dallas to Fort Worth. It was the closest congressional race in the state in 2020, but the new map breaks apart diverse cities like Carrollton and Irving and attaches them to the whitest and most conservative parts of Dallas to turn a district that voted for Joe Biden by five points into one that would’ve voted for Donald Trump by 12 points.

The new maps also dilute the voting power of growing communities of color by connecting them to white rural areas that have little in common. The city of Denton, north of Dallas–Fort Worth, which is trending blue, is now placed in a district stretching all the way to the Texas Panhandle represented by GOP Rep. Ronny Jackson (Trump’s former doctor), who lives in Amarillo, 325 miles away.

Democratic State Sen. Beverly Powell finds herself in a similar predicament. She won a swing district in 2018 that is just over 50 percent white and located entirely in urban Tarrant County, west of Dallas, but under the new lines, seven rural counties that voted heavily for Trump are added to her district. The district becomes eight points whiter and shifts in Trump’s direction by 10 points. Powell called the map “a direct assault on the voting rights of minority citizens in Senate District 10” and “an act of intentional discrimination.”

Perhaps the most shocking example of gerrymandering occurs in the statehouse map in Bell County, home to Fort Hood, a large military base north of Austin. Republicans split the city of Killeen, which is 40 percent Black, into two bizarrely shaped districts—with one donut-shaped district encircling the other—to protect two white GOP state representatives. “The only motivation for chopping Killeen up is that [if they didn’t], African Americans and Latinos would be able to elect the candidate of their choice,” Texas NAACP President Gary Bledsoe told the Texas Tribune.

The Freedom to Vote Act would prohibit the type of racial and partisan gerrymandering enacted by Texas Republicans, but it’s being blocked by the GOP’s use of the filibuster, which Democratic Sens. Joe Manchin and Kyrsten Sinema support because they argue the 60-vote requirement promotes bipartisanship in the Senate.

But the use of the filibuster to block federal legislation protecting voting rights has had just the opposite effect in places like Texas, allowing Republicans to weaken the voting power of Democratic constituencies through gerrymandering and voter suppression while excluding Democratic lawmakers from the governing process. (Virtually all of the laws restricting voting access passed by GOP-controlled states this year also were approved on party-line votes.)

State Rep. Todd Hunter, the chair of the House redistricting committee, hired a Republican operative from Wisconsin, Adam Foltz, to assist with drawing the statehouse maps in Texas. During the previous round of redistricting, in 2011, Foltz helped draw redistricting maps in Wisconsin that allowed GOP candidates for the state assembly to win 46 percent of votes but control 64 percent of seats in 2018. A federal court admonished Foltz for the “needlessly secret” process he used in Wisconsin, where GOP aides drew redistricting maps behind closed doors at a private law firm across from the state Capitol and showed them only to Republicans ahead of time. Hunter claimed in a House hearing he did “not know what happened in Wisconsin” and “did not even inquire” about it.

Hunter allowed no expert testimony from civil rights groups or voting rights experts before his committee approved its redistricting plans, which is highly unusual, and the House approved its own maps at 3:30 a.m. on October 13, after rejecting virtually all Democratic amendments on party-line votes. The congressional maps initially passed the House at 2:30 a.m. on October 17. The conference committee for the two chambers that negotiated the final congressional map included nine Republicans and only one Democrat, who refused to sign off on the changes.

Hispanics 39% of population but control 20% districts

Blacks 12% of population but control 2.7% districts

In every previous redistricting cycle since 1975, federal courts blocked Texas’ redistricting maps for discriminating against Black and Hispanic voters, but this is the first time in nearly 50 years that Republicans do not have to approve their redistricting maps with the federal government after the Supreme Court gutted the Voting Rights Act in 2013.

“There is no better case for the Freedom to Vote Act and the John Lewis Voting Rights Advancement Act than Texas redistricting,” Democratic State Rep. Trey Martinez Fischer from San Antonio said in a statement. “Decisive federal action is the only way to ensure that Texas voters can elect their candidates of their choice and receive fair representation in their government.”