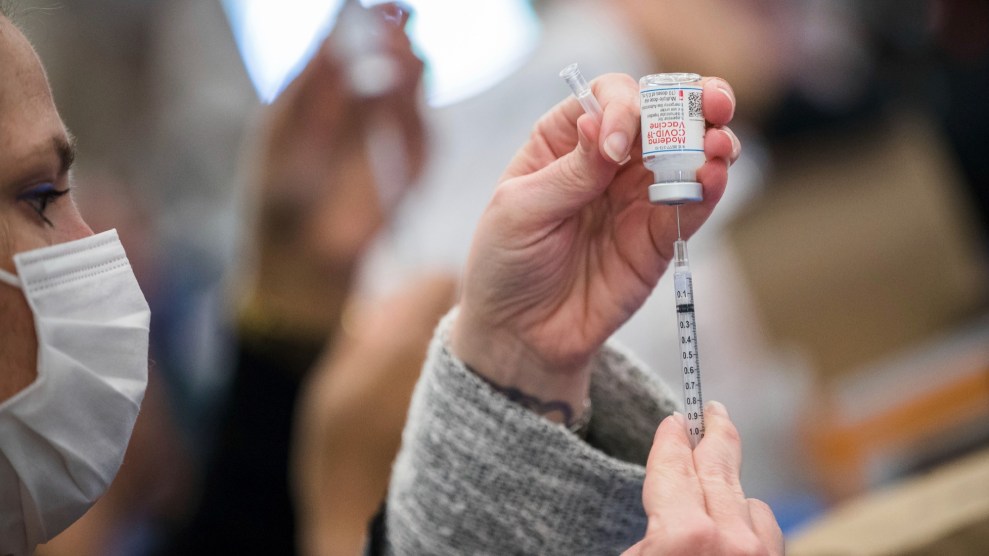 Everyone has seen the dire headlines that basically boil down to workers refusing to get vaccinated against COVID-19, and getting fired. “NY hospitals remove hordes of anti-vax workers who defied mandate” read one dramatic headline from the New York Post. But all the interest surrounding the very small percentage of people who’d rather be out of work than protect themselves from an infectious and potentially deadly disease obscures an important detail: The vaccine mandates are working, which means that people are getting vaccinated and staying employed. But, as we have learned, for many people the facts don’t really matter very much when it comes to most things COVID-related.

Last month, with COVID-19 deaths topping 650,000 and known infections soaring past the 40 million mark, President Joe Biden announced that all businesses with 100 or more employees would be required to have their staff vaccinated. This was in addition to requirements for health care systems receiving federal funds. Almost immediately, the outrage machine started churning. “The federal government has no authority to force businesses in Texas and across the country to mandate their employees get vaccinated,” Sen. Ted Cruz (R-Texas) said. “American businesses are still recovering from this past year and a half. It is cruel and burdensome to impose this authoritarian mandate.” Wasn’t this government overreach? Is this fair? And will this even work? No, yes, and totally.

“American businesses are still recovering from this past year and a half. It is cruel and burdensome to impose this authoritarian mandate.”

The faux outrage was just that: Hardly anyone was losing their jobs, and the vast majority of workers are following vaccine rules.

The United States has a long history of vaccine mandates—and subsequent backlash. Between 1889 and 1903, according to the New York Times, angry parents marched on schools and demanded that their children who were unvaccinated against smallpox be admitted. Cities and towns all over the United States also faced backlash over the mandates, but somehow they didn’t gain much traction. Resistance proved futile and smallpox was eradicated in the US in 1949 and globally by 1980.

In the 1940s, the spread of polio, a debilitating virus that often left children paralyzed, began to increase. In 1955, Jonas Salk invented a vaccine to prevent the disease and, thanks to a successful campaign often involving giving children the vaccine in sugar cubes at school, the US was polio-free by 1979. Unlike today, there was hardly a widespread backlash to the life-saving vaccine.

All of which is to say that vaccine requirements are not new. Proof of having been vaccinated against measles, tetanus, and yellow fever, to name a few, are required for travel, certain jobs, and admission to public schools and universities. And when it comes to COVID, the mandates have widespread support. A September 2021 Gallup poll found that 58 percent of people are in favor of the mandate that requires businesses with more than 100 employees to vaccinate their staff.

United Airlines, one of the first major companies to implement a mandate, announced that only 600 people out of its 67,000 employees would be terminated after refusing to get their shots (for a little perspective, that’s less than 1 percent). In North Carolina, the Novant Health hospital system, which has more than 35,000 staffers, fired only about 175 workers for noncompliance (again, less than 1 percent). Many colleges and universities required students and staff to be vaccinated—after all, most universities already require that students receive several other vaccines before they enroll. That did not deter CNBC from running a story titled “Facing COVID vaccine mandates, some students withdraw from college.” Despite the headline, the story cited only two students who had dropped out—and one of them withdrew from a school that didn’t even have a vaccine mandate, but the student feared that one loomed in the future.

So these are the basic facts, but as the CNBC story illustrates, just as with masking, it only takes a small number of people against vaccine requirements to make a lot of noise. Especially if those people happen to be affiliated with Fox News. In a surprise to exactly no one, Fox News has taken the ball of vaccine mandate fear-mongering and run with it. According to Media Matters, the right-wing network can boast nearly perfect attendance in its vigilance.

The channel’s stars have championed the idea that mandates are equivalent to tyranny as opposed to a sensible public health measure. Their guests like conservative writer Ben Domenech have called the rules “authoritarianism,” and ESPN’s Sage Steele, with no irony whatsoever, described her company’s vaccine policies as “sick.”

But naturally, Fox News as a business is requiring coronavirus vaccines. No word yet from stars like Laura Ingraham and Tucker Carlson on whether they’ll be taking a stand against their own employer! In the meantime, Carlson has falsely said that “natural immunity” is more powerful than a shot, and the real way to combat COVID would be to get off our phones and lose weight. The problem is made worse by the fact that, unlike during the smallpox and polio eras, we now have ways to quickly spread misinformation and outright lies about vaccines to a very broad audience.

Manny Diaz, a Florida Republican state senator, who came down with COVID-19 and recovered, is firmly against mandating vaccines. Last month, he drew scrutiny (okay, horror) when he suggested that lawmakers should “review” all vaccine mandates, not just the one for the coronavirus. This would mean no longer requiring vaccines against rubella, polio, and mumps for children. Diaz quickly backed down after a “firestorm.” It turns out no one wants to Make Polio Great Again—yet.

Last week, California school board officials pleaded with Gov. Gavin Newsom for protection from aggressive parents who are protesting COVID-19 policies, including masks and vaccines. In a letter, 1,000 officials wrote that they had been “accosted, verbally abused, physically assaulted, and subjected to death threats against themselves and their family members.” Meanwhile, 3,000 miles away, New York City Mayor Bill de Blasio has instituted a vaccine mandate for city employees, including school staff. The deadline to get vaccinated was Monday, October 4. That same day, 200 protesters took to the streets. They tore down a COVID-19 testing site, and video shows they did have a few supporters, like city firefighters who greeted them with fist bumps. But by the time the policy took effect, 95 percent of school staff had been vaccinated.

We already know what would happen if general vaccine mandates become a thing of the past. In recent years, anti-vaccine parents who falsely believe that vaccines are linked to autism and have not gotten their children inoculated have caused measles outbreaks. “The United States is seeing a resurgence of measles, a disease that had once been effectively eliminated from our country,” Alex Azar, the former head of the Department of Health and Human Services, said in a 2019 statement. “With a safe and effective vaccine that protects against measles, the suffering we are seeing is avoidable.” It’s a clear example of what happens when too many people start flouting mandates: The disease resurges. Sound familiar?

The mandates are doing what they are intended to do. But they won’t if the anti-vaxxers have their way. The health care systems in certain states and regions are already straining under the weight of the unvaccinated. The people who actually care about their health and the health of their children and their communities are talking with their doctors and other leaders about staying safe—not mainlining Fox News and dropping out of college just in case someone adds another vaccine to the hefty list already required. The rabidly anti-mandate crowd doesn’t have any real concerns about public health. Instead, their arguments relentlessly revolve around their autonomy, or government overreach, or liberty. “I will not take it, and if I get fired, so be it,” one Louisiana nurse identified only as Pam told the Guardian in August. “If they can take this freedom away from us, what else can they take away from us?” Not sure, but definitely far less than what COVID can.