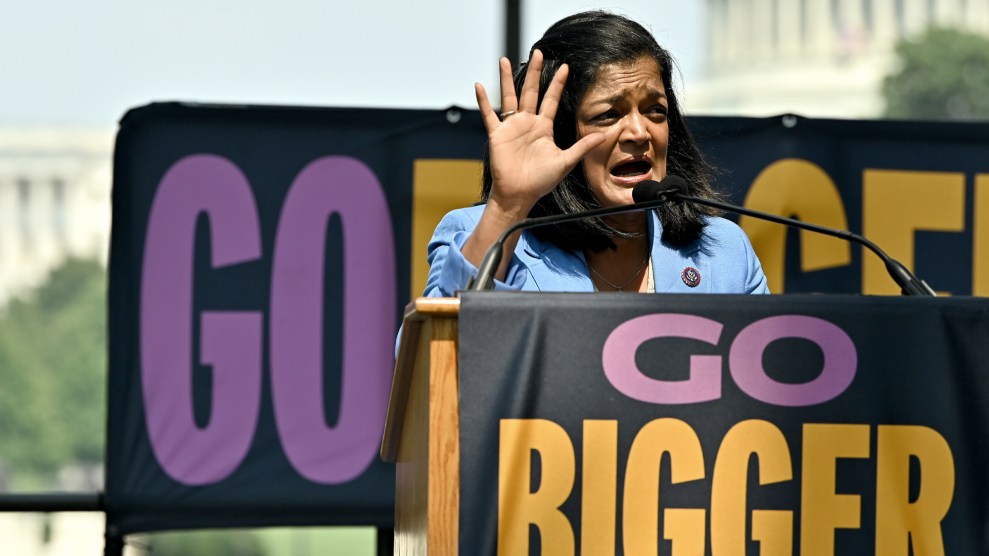 Progressive lawmakers first suspected they’d delayed the bipartisan infrastructure bill when no one asked them to vote for it. “No, not at all,” Rep. Ro Khanna (D-Calif.) told me when I asked if any Democratic congressional leaders had pressured him. “Zero squeeze,” added an aide to a progressive House lawmaker. House Speaker Nancy Pelosi (D-Calif.) had been feverishly working the phones all day Thursday to see what support she could find for the legislation. By Thursday evening, only a few progressives had fielded inquiries. “People believe us,” Congressional Progressive Caucus Chair Rep. Pramila Jayapal (D-Wash.) explained of the dynamic. “I am not somebody who does this often—I believe in really picking our battles.”

Pelosi had been pressed to hold the vote on the $1.2 trillion bill to keep a promise she’d made to a small centrist faction last month. But progressives were trying to hold the speaker to another one of her promises: That the bipartisan bill—which would primarily fund upgrades to highways, bridges, and public transit—would get a vote only if a $3.5 trillion social spending bill also received a vote. For weeks, Jayapal had said her caucus had the votes to tank the bipartisan deal if that vow wasn’t kept. As the clock neared midnight on September 30, House and Senate negotiators remained far from agreement on the $3.5 trillion deal that would satisfy the Senate’s centrist holdouts, Sens. Joe Manchin (D-W.V.) and Kyrsten Sinema (D-Ariz.), and the House’s left flank. Pelosi didn’t have the votes and reconvened her caucus for another round of negotiations on Friday.

On a private call with the Congressional Progressive Caucus that night, Jayapal told her fellow progressives not to gloat. “Something that I felt very strongly about is to lean into the fact that it’s the president’s agenda,” she told me earlier that day. “This is not progressives against the president.”

To find themselves in both a posture of power and alignment with their party’s leadership is a new look for progressive lawmakers. For decades, the Congressional Progressive Caucus had been “a large, but largely disorganized, doormat” in the words of a former staffer to Rep. Alexandria Ocasio-Cortez (D-N.Y.). Some Democrats feared that would change once Ocasio-Cortez and Rep. Ayanna Pressley (D-Mass.) defeated Democratic incumbents and the so-called Squad arrived in Washington in January 2019. Not long after her primary victory, Ocasio-Cortez floated the idea of forming a smaller voting bloc that drew comparisons to the “Freedom Caucus of the left,” a reference to the highly organized group of right-wing lawmakers who frequently forced GOP leadership to kowtow to their demands during the Obama administration.

On Thursday night, House progressives finally asserted their power—but in a way that bore little resemblance to their nihilistic right-wing counterparts. Both the bipartisan infrastructure legislation and the $3.5 trillion social spending bill represent the bulk of President Joe Biden’s domestic agenda. That agenda was reflected in the social spending bill that had been crafted with input from the party’s left flank, which prioritizes the massive investments in child care, health care, and the fight against climate change. In the days leading to the vote, the moderate faction was “1,000 percent” certain Pelosi would find the votes. When she didn’t, what became clear is that in refusing to support the measure, progressives acted not as their party’s chief antagonists, but as key defenders.

“There’s a nuance that’s really important: This is not progressives blowing something up,”  Rep. Jared Huffman (D-Calif.), a House progressive, told me. “This is progressives being adults, sticking to the deal, and showing a lot of leadership in landing the plane.”

“This is not progressives blowing something up. This is progressives being adults, sticking to the deal, and showing a lot of leadership in landing the plane.”

That this would be the case seemed highly unlikely when Democrats regained control of the House of Representatives in 2018. Trump had already been in office for two years and Democrats had won a decisive midterm victory thanks to disenchanted suburban GOP voters. As Pelosi looked forward to the 2020 elections, the Speaker cautioned practicality, moderation, and—most of all—unity. Progressives had other plans and emerged as the pebble in Pelosi’s stilettos. Ocasio-Cortez made her Washington debut with a climate protest outside Pelosi’s office in November 2018, an unprecedented, even audacious, intraparty provocation. Jayapal forged ahead on Medicare for All at a moment when Pelosi wanted to circle the wagons around Obamacare, which was facing yet another attack. When the so-called Squad of left-flank lawmakers threatened to tank a border funding bill in July 2019, the speaker belittled them. “They didn’t have any following,” Pelosi told New York Times columnist Maureen Dowd. “They’re four people and that’s how many votes they got.” Harsh, but fair—their legislative threats went nowhere.

What changed? Progressive ideas are ascendant, for one thing. Liberal economists had been softening the ground for progressive economic policy since the Great Recession, Lindsay Owens, the executive director of the Groundwork Collaborative, a left-leaning think tank, told me. The ideas championed by Sens. Bernie Sanders (I-Vt.) and Elizabeth Warren (D-Mass.) once had been deemed pipe dreams during their respective 2020 presidential bids, but the success of those campaigns—coupled with a once-in-a-generation pandemic, an unhinged president, and attendant economic collapse accelerated their acceptance. “We really delivered a mandate to this president to be incredibly progressive,” Jayapal says. “Many of the things that he has come out for were things that we were pushing forward during the campaign.”

Jayapal credits the policy task forces between allies of Biden and Sanders’ campaigns as a dress rehearsal for the sustained outreach to progressives by the White House as it decided upon its domestic agenda. Some of the Sanders’ initiatives, such as demands for affordable housing and Civilian Climate Corps, made their way from the pages of the task force policy recommendations to the Congressional Progressive Caucus’ priorities, and into the White House’s proposals. “If progressives are treated as adversaries, all you’re left with is the disrupter role to play,” Huffman says. “But if progressives are treated as allies, we can really help deliver things.”

“We’re not giving her headaches—we’re helping her on her agenda.”

As for Pelosi, Biden’s priorities are her priorities, too. “It’s not too ambitious,” Pelosi said of the $3.5 trillion bill during her weekly press conference on Thursday, “and what that is, is what our agenda will be.” Rep. Mark Pocan (D-Wisc.), a former chair of the progressive caucus, put it this way, “We’re not giving her headaches—we’re helping her on her agenda.”

There’s also an element of organizing and discipline that had previously eluded the caucus. The Congressional Progressive Caucus instituted new membership rules at the end of 2020, including mandatory meeting attendance and voting as a bloc when two-thirds of caucus members share a position on an issue, all of which helped the caucus become “more of a cohesive unit,” Pocan explains. (Huffman, meanwhile, isn’t so sure those reforms were “super material” to what has transpired recently, believing instead the moment met progressives.) But everyone gave credit to this strategy: Once it became clear that the White House economic agenda would be split across two bills, progressives negotiated for and got buy-in from both Pelosi and Senate Majority Leader Chuck Schumer (D-N.Y.) to make the vote on one contingent on the other because they represented their president’s priorities. “That was our position, but it became the entire Democratic Party position,” Jayapal explained.

Well, almost the entire Democratic Party. That small fraction of moderate House Democrats decried the speaker’s decision to delay the vote. Rep. Chris Pappas (D-N.H.) called it “incredibly disappointing” and accused his progressive colleagues of “weeks of political posturing and gamesmanship.” Now, Democrats return to the negotiating table—and in this phase, progressives, the White House, and the overwhelming majority of Democratic lawmakers who support both bills stand to lose. Both Manchin and Sinema have indicated they’d like to see the $3.5 trillion slashed by up to $2 trillion, a top-line limit that will significantly curtail its ambition. Manchin told reporters on Thursday that he refuses to support an “entitlement-based society.” He added, that all progressives “need to do” in order “to get theirs” is elect more liberals.

Administration officials have remained publicly neutral as Democratic lawmakers hash out their differences. Late Thursday night, White House press secretary Jen Psaki issued a statement thanking lawmakers “from across the Democratic Caucus” for trying to reach an agreement on both bills. But White House chief of staff Ron Klain may have betrayed that position when he retweeted a tweet from Huffman that criticized a New York Times headline that described the delayed vote as a “big setback for the Biden agenda.”

“The headline should be we are setting the Biden agenda back on track,” Huffman wrote on Twitter, “not setting it back.”