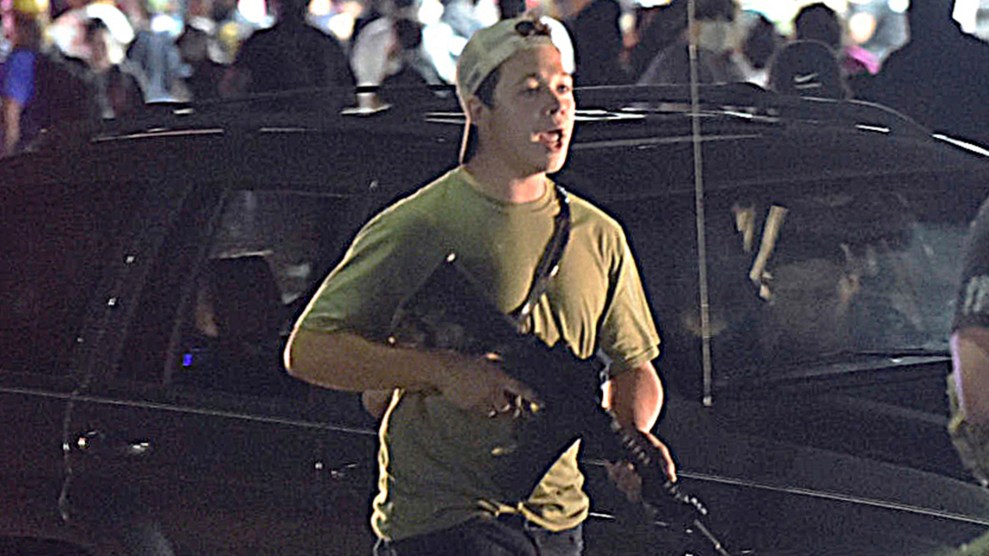 Kyle Rittenhouse and Gaige Grosskreutz—two young men who were both foolishly armed—faced off, for a split second, in the middle of a street in Kenosha, Wisconsin, on August 25, 2020, Wild West style.

Then Grosskreutz, who was 26 and a veteran of Black Lives Matter protests, lifted a loaded Glock pistol, briefly pointing it toward Rittenhouse, who was 17 and an aspiring cop. Rittenhouse has said he was in Kenosha that night—amid the unrest that followed the police shooting of Jacob Blake—to protect car dealerships from arson and to dispense medical aid. Instead, he blew off most of Grosskreutz’s right bicep with an AR-15.

Moments before, Rittenhouse had killed Jacob Rosebaum, 36, and Anthony Huber, 26. Rittenhouse said all three shootings were acts of self-defense. A jury agreed on Friday, acquitting him on all counts. Wisconsin law allows people to use deadly force if they “reasonably believe” it is “necessary to prevent imminent death or great bodily harm.” Rosenbaum, a mentally ill man released from prison earlier that day, had chased Rittenhouse and apparently tried to grab his gun, after, Rittenhouse testified, threatening to cut out his heart. Rittenhouse shot him four times. Rittenhouse fled, and Huber, pursuing him, hit him with a skateboard and tried to disarm him. Rittenhouse shot Huber in the chest.

Cross examining Rittenhouse last week, lead prosecutor Thomas Binger attempted to make the point that it was Rittenhouse, an Illinois resident, who created the danger. “Can you help me understand, Mr. Rittenhouse, why Gaige Grosskreutz, with a pistol in his hand, is a threat to kill you,” the prosecutor asked, “but you, with an AR-15 pointed at him, [are] not a threat to kill him at this moment?”

It was a fair point—but insufficient. Rittenhouse was a threat to Grosskreutz. Grosskreutz was also a threat to Rittenhouse. Binger’s query did not refute Rittenhouse’s self-defense claim so much as it highlighted that either man could have killed the other and made a plausible self-defense argument. They were in a legal vacuum, a moment of pure anarchy.

Rittenhouse’s trial showcased not only the failure of law enforcement, but of the law itself—and seems likely to encourage similar incidents in the future.

Rittenhouse’s trial showcased not only the failure of law enforcement, but of the law itself, to address the violence in Kenosha that night. And it seems likely to encourage similar incidents in the future.

Obviously, by prosecuting Rittenhouse for murder, the Kenosha County District Attorney’s office was asserting that the young man’s conduct was illegal. But a glaring problem with the prosecutors’ case was that the actions they tried to proscribe were, as the trial suggested, permitted under Wisconsin law.

Rittenhouse recklessly brought an assault weapon into a dangerous situation. Then he sought to justify his killing of Rosenbaum and Huber by insisting he was afraid they would use that same gun against him. That may strike many people as a deeply flawed argument, but it was legally tenable in Wisconsin and much of the country.

As a minor, furthermore, Rittenhouse could not legally buy such a gun. He got it through an illegal straw purchase. But Judge Bruce Schroder ruled that a hunting exemption meant Wisconsin law did not clearly bar Rittenhouse from carrying the weapon that night, and so he threw out a related weapons charge. Under Wisconsin law, too, neither the circumstances of how Rittenhouse got the rifle, nor the recklessness he showed in carrying it that night, bore on his self-defense claims. “Poor judgement is not a crime,” Andrew Branca, a Colorado lawyer who wrote the book The Law of Self Defense: Principles, told the Associated Press.

It can be simultaneously true that Rittenhouse’s acquittal was legally justified and that its consequences will be terrible. The legal question, addressed at trial, was not the same as the political debate happening on TV and online. But Rittenhouse’s fans were primed to greet the verdict not only as a declaration that Rittenhouse wasn’t guilty of murder, but that he was morally right — and worthy of emulation.

Most reasonable people would agree that armed people facing off in city streets while police cower in armored vehicles, is, by and large, bad.

Rittenhouse and Grosskreutz, whose permit for his pistol had expired the day before, were part of a slew of armed people out in Kenosha that night. “There was probably more people armed with weapons than not throughout the entire course of the civil unrest,” Kenosha police officer Pep Moretti testified, explaining why he had failed to detain the teenager with an AR-15 who, after shooting three people, was trying to surrender to him.

As polarized as discussion of the trial has been, most reasonable people would agree that armed vigilantes facing off with armed protesters, or rioters—while police hide blocks away in armored vehicles—is, by and large, bad. But in Kenosha, and much the country, it is legal. And it is becoming normal.

A recent New York Times analysis argued that US laws around self-defense are proving “ill-equipped” to handle expanding gun rights, stand-your-ground laws, existing citizen’s arrest statues, and an extremist gun culture that embraces vigilantism. Laws that protect carrying and using guns are making it less clear when shooting someone is illegal. As one 2020 academic study put it, more people are “pointing guns” at each other without “clear rules of conduct.” And gun rights fans, egged on by legal uncertainly and each other, are getting more aggressive. “Citizens are no longer thinking that they may just defend themselves,” Kimberly Kessler Ferzan, a University of Pennsylvania law professor, argued recently in the Texas Law Review. “Instead, they intend to take the fight to the ‘criminals.’”

Last year, when I covered protests in Washington following the murder of George Floyd, I reported on the presence of unidentified federal officers policing the demonstrations. Critics of this practice pointed out one danger: It blurred the line between law enforcement and civilians, making it easier for armed yahoos in paramilitary gear to appoint themselves an extension of law enforcement. This quickly escalated from a hypothetical to an actual problem.

On July 4, 2020, I happened to be at the Gettysburg National Battlefield, when hundreds of heavily armed militia members showed up to protect Civil War monuments against threatened vandalism by antifa, a threat that was later revealed to be a hoax. On January 6, I watched people who also believed lies storm Congress. Among them were members of militia-style groups, including Oath Keepers who stashed an arsenal a few miles away, in case, they said, Donald Trump asked them to help suppress an imaginary leftist uprising.

Those were just a couple events in a national trend. But I mention incidents where I was present because I found having to trust my life to the judgment of people so deluded to be a disconcerting experience. And I’m white. Though Rittenhouse and his victims were all white people, the menace of far-right vigilantes is a lot more visceral for people of color.

As the Rittenhouse jury deliberated on Wednesday, a rifle toting demonstrator, who reportedly described himself as “anti-Black Lives Matter,” showed up across the street from the courthouse. Sheriff’s deputies eventually told the man that he could not carry the gun because he happened to be within 1,000 feet of a school. The courthouse was apparently not the problem. The man returned the next day with the rifle in a bag. Meanwhile, right-wing commentators urged fans to prepare to counter protests expected to follow an acquittal. Such efforts may push more protesters on the left to arm themselves. So the country edges toward normalizing political violence.

If Kyle Rittenhouse walks (rightfully so) and protests start, the right needs to mobilize and counter.
This is about God given right to self-defense, and we need to vocally and publicly preserve it.

The Rittenhouse saga is a catalogue of failures. The Kenosha police failed to detain Jacob Blake without shooting him seven times, inches from his children. Then law enforcement failed to maintain order in the city. Rittenhouse’s family and friends clearly failed him, leaving a lost, dangerous kid who failed to exercise common sense or basic morality. Prosecutors failed to mount a convincing case. But the biggest failure was that the events of the trial, and the public perception of it, will not deter the kind of conduct that led to it. It seems sure to cause more right-wing vigilantism, more armed confrontations, and more political violence in the streets.