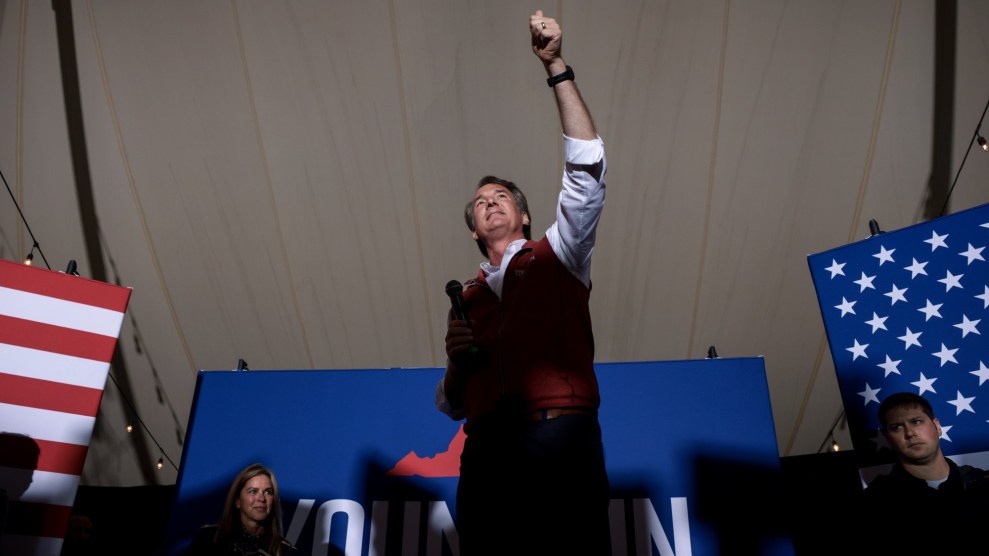 On Tuesday, Virginia voters cast their ballots to elect a new governor in the most closely watched election since President Joe Biden took office. After weeks of polls showing a deadlocked off-year race between former Gov. Terry McAuliffe (D) and Republican newcomer Glenn Youngkin, the GOP candidate prevailed in a state that had increasingly leaned Democratic over the past two decades, and where Biden beat Donald Trump by 10 points in 2020. Republicans hadn’t won a statewide election in the commonwealth since 2009, and Youngkin’s victory fits a pattern in Virginia of successful gubernatorial candidates coming from the party that lost the White House the prior year. The Virginia race, which registered record-high early voting figures, had been widely anticipated as a referendum on the start of Biden’s presidency and a preview of next year’s midterm elections.

McAuliffe, a former chairman of the Democratic National Committee and close friend of the Clintons, served one term as governor between 2014 and 2018, leaving office with a positive assessment from 55 percent of voters. In Virginia, governors are not allowed to serve two consecutive terms. Throughout the campaign, McAuliffe bet on voters’ disapproval and fear of Trump by casting Youngkin as a “Trump wannabe” and highlighting in campaign ads the former president’s endorsement of Youngkin. Meanwhile, Youngkin, the former Co-CEO of the Washington-based private equity firm the Carlyle Group, tried to appeal to independent and moderate, white, college-educated suburban voters—“Peloton dads and soccer moms” as his chief strategist put it—by holding Trump at arm’s length without separating himself entirely from the previous president. As Mother Jones’ Washington Bureau Chief David Corn wrote:

[T]hroughout the tight race that pits him against former Democratic Gov. Terry McAuliffe, Youngkin has been striving to have it both ways: come across as a reasonable Republican in a state Biden won by 10 points, while still embracing the endorsement he received from Donald Trump and playing footsie with Trump’s baseless claim the election was stolen by repeatedly calling for “election integrity.” Yet in one important aspect, Youngkin has signaled his full support for the Trump conspiracy crowd: he has funneled his own personal cash into the campaigns of Big Lie advocates and 1/6 apologists.

Hot-button social issues and national-level cultural wars played a big role in this election and may have just determined its outcome. McAuliffe criticized Youngkin on his opposition to abortion and marriage equality and resistance to COVID-19 vaccine mandates. But no other issue ranked as high in importance for voters as education, according to a Washington Post-Schar School poll from late October. Indeed, counties such as Loudoun and Franklin have become fertile ground for heated school board meetings featuring angry debates over Critical Race Theory, a 1970s theoretical framework of legal studies that examines and challenges the ways racism is systemic and endemic to US society and institutions. Youngkin made education a pillar of his campaign, vowing to give parents more power over what children are taught in school and to ban CRT, despite the fact that it isn’t actually taught in Virginia schools.

What's it like to have Terry McAuliffe block you from having a say in your child's education?

This mom knows – she lived through it. Watch her powerful story. #VAgov pic.twitter.com/u8EjmMQX0n

Glenn Youngkin is ending this campaign by dragging our kids into the middle of his ugly, right-wing culture war.

I’ll invest in our schools to deliver a world-class education for every Virginia child. Glenn Youngkin will ban books and cut budgets.

The “political outsider” recently released a ​​six-figure digital campaign ad playing up McAuliffe’s statement during a debate that he didn’t “think parents should be telling schools what they should teach.” In another ad, mother Laura Murphy from the Northern Virginia community of Fairfax said her “heart sunk” when she saw her high school son’s reading assignment. “It was some of the most explicit material you can imagine,” she said. The book in question was Toni Morrison’s Pulitzer Prize-winning novel Beloved. The mother then criticized McAuliffe for his 2016 veto of proposed legislation that would have required schools to notify parents of any materials that include explicit content.

Meanwhile, the Democrat accused Youngkin of pitting parents against other parents and against teachers. “He’s turned our school boards into war zones. It’s all about this critical race theory, which is not taught in Virginia. This is all he talks about. It has never been taught in Virginia. Let’s call it what it is: It’s a racist dog whistle. He’s run a racist campaign from start to finish,” McAuliffe said.

Youngkin faced criticism over his “issue-less” campaign but he may have succeeded in modeling a post-Trump roadmap for GOP candidates in 2022—one that could have education at its core.