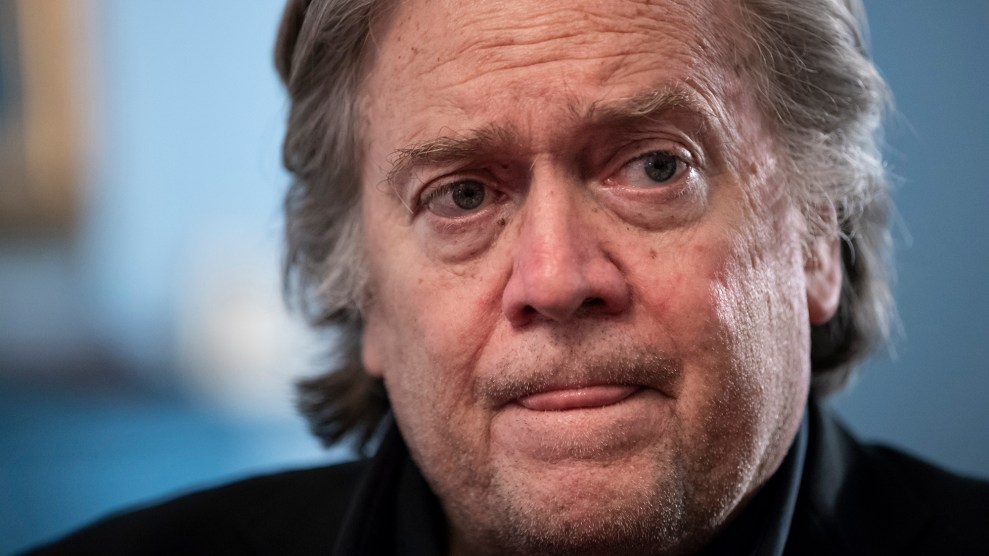 The Department of Justice charged former Trump adviser Stephen K. Bannon on two counts of contempt of Congress on Friday afternoon, after Bannon refused to appear for a deposition or comply with a House subpoena for documents relating to the January 6 attack on the Capitol.

Over the past few weeks, the House Select Committee has requested documents from dozens of former Trump staffers that may help the committee further determine what led up to the insurrection, including the former president’s level of responsibility in the failed attempt to overturn the 2020 presidential election results. But until now, it has been unclear how the House would compel former members of the Trump administration to comply with their requests.

“Since my first day in office, I have promised Justice Department employees that together we would show the American people by word and deed that the department adheres to the rule of law, follows the facts and the law and pursues equal justice under the law,” Attorney General Merrick Garland said in a statement. “Today’s charges reflect the department’s steadfast commitment to these principles.”

The indictment is a big boost for the Select Committee’s investigation. It is likely to deter other officials the panel wants to question from refusing to cooperate. While some witnesses are already cooperating with the committee, high-level former Trump aides have followed Bannon’s defiance of the committee. On Friday, former White House Chief of Staff Mark Meadows failed to appear for a deposition that the committee had instructed him to attend, because his lawyer said Trump had instructed him not to cooperate.

“It now appears the courts will have to resolve this conflict,” Meadow’s lawyer said.

Steve Bannon’s indictment should send a clear message to anyone who thinks they can ignore the Select Committee or try to stonewall our investigation: no one is above the law.

We will not hesitate to use the tools at our disposal to get the information we need.

After Biden defeated Trump last year, Bannon echoed the former president’s election fraud lies while Bannon was seeking a pardon from Trump on charges that he defrauded a charity. Bannon claimed that he personally urged Trump to “make a dramatic return” to Washington ahead of January 6 and vowed to “bury Biden.” And during his podcast on January 5, Bannon encouraged listeners eager for “revolution” to go to Washington the following day. “All hell is going to break loose tomorrow,” he said.

Congress has no real independent power to enforce its subpoenas; ultimately, it relies on DOJ to file charges as the means to doing so. Since lawmakers voted on October 21 to hold Bannon in contempt, Select Committee members had been urging the Justice Department to indict Bannon. Many left-leaning pundits, already critical of Garland for a perceived reluctance to prosecute Trump and his allies, ripped the US attorney general over the DOJ not immediately charging Bannon.

If convicted of contempt of Congress, Bannon could face prison time of up to a year for each count. The DOJ’s press release is here, and the full grand jury indictment is here.

This is a breaking news story and will be updated.