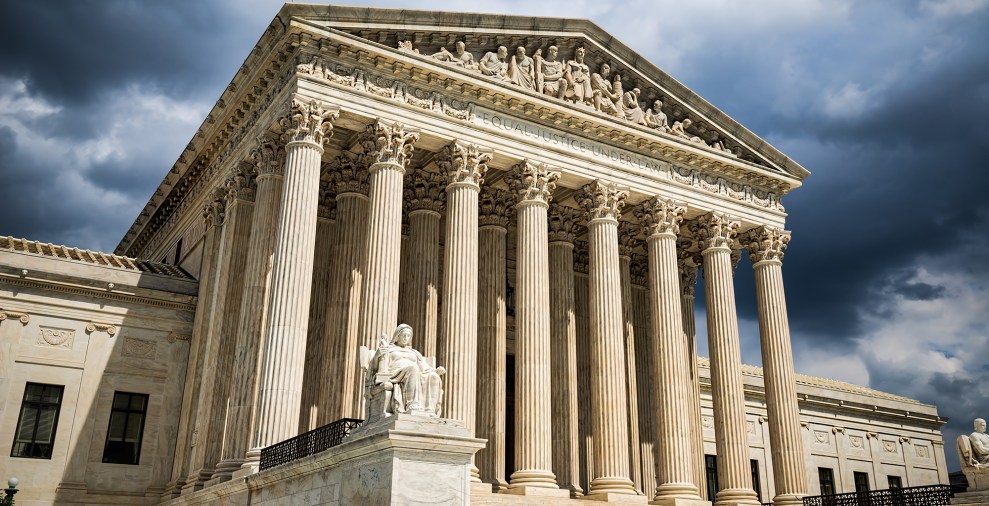 The lawsuits, filed by Republican-controlled states and a West Virginia oil company, aim to curb the federal government’s power to mandate a transition away from fossil-fueled power plants.

If the high court’s 6-3 conservative majority finds in favor of the plaintiffs, the ruling wouldn’t eliminate the federal government’s ability to regulate carbon dioxide emissions under the Clean Air Act, a legal determination known as the endangerment finding. It would, however, restrict the legal routes through the Clean Air Act for enacting such rules. That could make it harder for the United States to hit its goal to cut emissions in half by the end of this decade.

In an updated grant of certiorari, the Supreme Court said it plans to ask questions about a legal issue known as “non-delegation doctrine,” which Cornell Law School describes as the “principle in administrative law that Congress cannot delegate its legislative powers to other entities.”

A ruling that explicitly requires Congress to pass new laws allowing EPA to regulate carbon emissions could prove an even bigger setback.

The White House abandoned its main legislative proposal to pay utilities to produce more zero-carbon electricity, and fine those that fail to increase their clean output each year, after Sen. Joe Manchin (D-W.Va.) said he’d torpedo the administration’s agenda if Democrats included the measure in a sweeping spending bill currently under consideration. Democrats are also expected to lose control of Congress in next year’s election.

At issue is a legal snafu from 1990, when then-President George H.W. Bush mistakenly signed two slightly differing versions of the Clean Air Act into law, creating legal confusion over the line between federal and state power when it came to regulating greenhouse gases.

When it proposed its Clean Power Plan, the Obama administration was relying on the version of the law interpreted to give agencies more authority. In February 2016, the Supreme Court zeroed in on the legal ambiguity around the statute known as Section 111(D) to issue a temporary pause on implementing the regulation. Before the White House could resolve the issue, Donald Trump became president, and put Scott Pruitt—the former Oklahoma attorney general who led the lawsuit that resulted in the stay against the Clean Power Plan—in charge of the EPA. The Clean Power Plan was scrapped soon after.

Shortly before President Joe Biden was inaugurated, the US Court of Appeals for the District of Columbia Circuit determined that the Clean Power Plan was legally sound, tossing out the much weaker regulation the Trump administration proposed to replace it.

The Biden administration is still working on a number of regulations aimed at cutting emissions, and none so far rely on the already-contentious Section 111(D). “It’s only this one statute of the Clean Air Act, which is one of many tools the administration has,” Michael Gerrard, director of Columbia Law School’s Sabin Center on Climate Change Law, told HuffPost. “I don’t think it’s a problem for most of the measures the administration might want. But there’s this one particular tool that might be in trouble.”

The court could, however, seek to “take this as an opportunity to rule more broadly about the ability of Congress to delegate decisions to agencies,” by going after the non-delegation doctrine, and might “say Congress is going to have to give EPA authority over such an important area and be more clear and explicit.”

That would likely constitute a victory for the plaintiffs. With a 50-50 split in the Senate, Democrats need to vote in lockstep to pass a bill, giving unique power to lone senators like Manchin, whose opposition to climate regulations and personal family fortune tied up in a coal business have made him a magnet for fossil fuel industry donations throughout the past year. He’d be unlikely to vote for legislation granting the EPA new powers to regulate greenhouse gases. And Republicans are favored to win back at least one chamber of Congress in next year’s midterm election.

“As a practical matter, this will almost certainly prevent the Biden Administration from moving forward with a new rule to regulate carbon emissions from the power sector,” Jeff Holmstead, a George W. Bush-era EPA air administrator who now works at the energy lobbying firm Bracewell, said in an emailed statement calling the decision a “huge deal—and a big surprise.”

“They’ll have to wait to see what the Supreme Court says about how (and whether) they can regulate carbon emissions from the power sector under current law,” he added.

The Natural Resources Defense Council, one of the more powerful and well-funded environmental litigators, vowed Friday to fight the cases at the Supreme Court. “Coal companies and their state allies are asking the Court to strip EPA of any authority under the Clean Air Act to meaningfully reduce the nearly 1.5 billion tons of carbon pollution spewed from the nation’s power plants each year—authority the Court has upheld three times in the past two decades,” David Doniger, senior strategic director of the NRDC’s climate and clean energy program, said in a statement. “We will vigorously defend EPA’s authority to curb power plants’ huge contribution to the climate crisis.”

West Virginia Attorney General Patrick Morrisey, who signed onto the legal petition, called the court’s decision to hear the case the “biggest Supreme Court news since our win in Feb of 2016.”

“We must not allow Biden’s EPA to impose unlawful climate regs on our nation,” he wrote in a tweet.

Biden’s efforts to rein in US emissions have already faced challenges from the federal judiciary, which is now stacked with judges Trump appointed. In June, Judge Terry Doughty of the US District Court for the Western District of Louisiana, a Trump appointee, issued a ruling lifting the White House’s pause on leasing federal land to oil and gas companies. Biden’s Department of the Interior is now set to auction off about 80 million acres of the Gulf of Mexico to drillers on Nov. 17, just five days after the U.N. climate summit comes to a close.