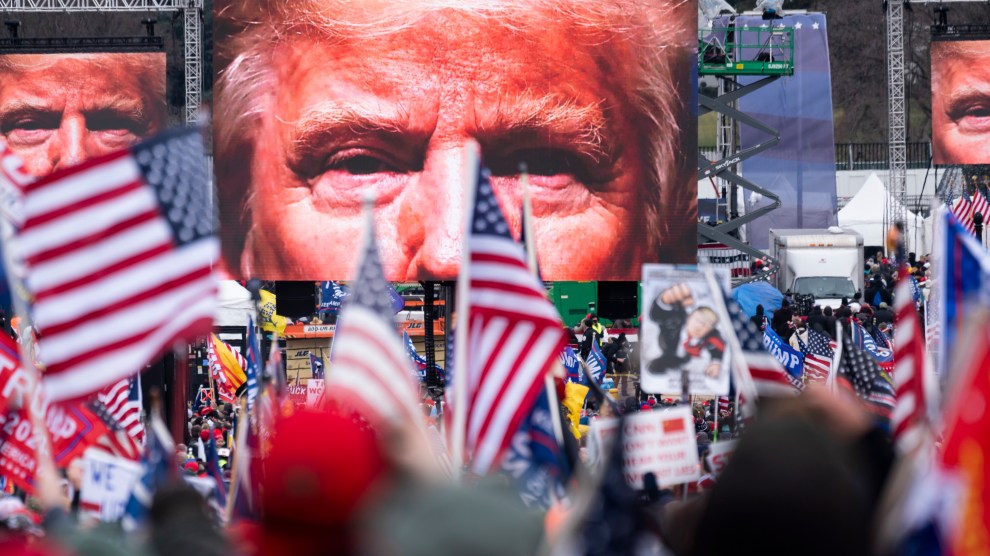 Trump shown on video screens before his speech at the White House, January 6, 2021Bill Clark/CQ-Roll Call/Getty

The attack on American democracy that took place on January 6, 2021, is not just harrowing history of almost a year ago. It is an attack that remains ongoing.

Ever since the late afternoon of that day—when the White House posted a short video of Donald Trump expressing “love” for the “very special” people who stormed Congress and telling them belatedly to go home—the 45th president has deceived the public about the horrific siege that shook Capitol Hill and the nation. He has denied the many vicious attacks on police by describing his supporters’ interactions with them as a “lovefest,” ignored the more than $30 million in damage and security costs, and falsely claimed that the insurrectionists, many of whom were armed, had “no guns whatsoever.” In a recently revealed interview with a book author recorded in March, Trump sided with the bloodthirsty mob that threatened to hang Mike Pence and admitted he had no concerns that day about the safety of his sitting vice president.

Now, the twice-impeached former president is pushing his most brazen narrative yet in support of the insurrection. Since mid-October, in a series of statements posted online and in remarks to right-wing media and at fundraising events, Trump has sought to fully transform the Capitol siege into a patriotic triumph of the Republican Party. He started rolling out his latest messaging as the House select committee investigating January 6 issued a wave of subpoenas whose targets Trump instructed not to comply, including now-indicted ally Steve Bannon. Trump’s effort goes beyond repeating his long-running lie about the 2020 election being “stolen” through “massive fraud.” Using a familiar tactic, he is now appropriating language about the insurrection and the so-called Big Lie that drove it as he aims to flip reality on its head.

“Why isn’t the January 6th Unselect Committee of partisan hacks studying the massive Presidential Election Fraud, which took place on November 3rd and was the reason that hundreds of thousands of people went to Washington to protest on January 6th?” he asked in a statement posted October 13 on the “Save America” campaign site hosted at donaldjtrump.com. “Look at the numbers now being reported on the fraud, which we now call the ‘Really Big Lie.’ You cannot study January 6th without studying the reason it happened, November 3rd.”

Trump continued the theme the following day with a statement declaring that the committee was “looking to hold people in criminal contempt for things relative to the Protest” and was “using prosecutors and prosecutions to destroy more than half of this Country.” Then, on October 21, he delivered a more polished version in two short sentences:

“The insurrection took place on November 3, Election Day. January 6 was the Protest!”

He has since repeated the claim multiple times. Though he remains banned from major social media platforms, his messaging still has vast reach, from his frequent interview appearances in right-wing media to the numerous sycophants backing him in Congress.

Trump has made freshly evident, in other words, that he is serving as the inspirational leader for a domestic terrorism movement. His role as such was first openly described by a handful of leading national security experts in the season of his reelection defeat and tumultuous final months in office. Back then, the discussion centered on Trump using tactics of stochastic terrorism, a method of inciting violence veiled in plausible deniability that those experts (and this journalist) recognized from Trump in the run-up to January 6. Two conservative Republicans who left the Trump administration as whistleblowers in 2020, both counterterrorism experts, sounded the alarm, with one referring to Trump’s “coded support” for far-right extremist groups. (Numerous members of the Oath Keepers and Proud Boys who heeded Trump’s call for supporters to descend on DC would soon face conspiracy charges stemming from the assault on Congress.) A third longtime Republican, a former senior national security official in the George W. Bush administration, described Trump as “an arsonist of radicalization.”

As the former president further seeks to rewrite January 6 and stoke incendiary far-right grievances, veiled tactics and plausible deniability are no longer in the equation, according to another expert among those last fall who called out Trump’s tactics. “So much commentary still seems uncomfortable or coy about stating what Trump is doing,” says Juliette Kayyem, who served as an assistant secretary at the Department of Homeland Security under President Obama and currently directs national security research at Harvard’s Kennedy School of Government. “He’s not hinting, whistling, or luring these extremists anymore. He’s providing an owner’s manual. I will never understand why we are being so polite about describing this.”

At a political rally in Georgia in late September, Trump suggested that investigations into January 6 were just another partisan “hoax.” Other recent revisionism and propaganda from him has included making a martyr of Ashli Babbitt, a fervent conspiracy theorist from California who was fatally shot by a Capitol police officer that day. Babbitt was at the front of a group of Trump extremists who violently broke into the Speaker’s Lobby adjacent to the House chamber and were closing in on fleeing lawmakers. “We must all demand justice for Ashli and her family,” Trump said in a video played at an October rally on the date of Babbitt’s birthday, calling her “a truly incredible person” and declaring “there was no reason Ashli should’ve lost her life that day.”

Trump, Cheney said, “is attempting to unravel the foundations of our constitutional republic, aided by political leaders who have made themselves willing hostages to this dangerous and irrational man.”

In April, the Justice Department completed an investigation into the shooting, acknowledging the “tragic loss of life” and concluding that the police officer had acted lawfully as he protected members of Congress evacuating the House chamber.

Rep. Liz Cheney, the House select committee’s Republican vice chair and now a pariah in her own party, has not shied away from highlighting the simmering danger. During a hearing on October 20, she said the committee suspected that Trump “was personally involved in the planning and execution of January 6th.” In early November, she blasted Trump for repeating that the 2020 election was the actual “insurrection” at a large annual GOP fundraising dinner, where Trump was invited by House Republican leaders as the keynote speaker. Trump, Cheney said in a statement, “is attempting to unravel the foundations of our constitutional republic, aided by political leaders who have made themselves willing hostages to this dangerous and irrational man.” She further described him as “a former president who is at war with the rule of law and the constitution.”

The brutality of Trump’s retorts has been telltale: “People absolutely cannot stand her,” he seethed about Cheney, in a statement posted the same day the Wyoming Republican said the House committee would get to the bottom of his involvement in January 6. “She is a smug fool,” he added, piling on the contempt: “To look at her is to despise her.”

Bannon appeared to echo Trump’s infamous comments telling the Proud Boys to “stand back and stand by.”

Rhetoric from the recently indicted Steve Bannon has also been notable. “We’re taking down the Biden regime,” Trump’s former White House adviser said as he arrived at a court hearing on Monday to face criminal contempt charges. Afterward, Bannon expanded on his comments to the media: “This is gonna be the misdemeanor from hell for Merrick Garland, Nancy Pelosi, and Joe Biden,” he said, falsely claiming that Biden had publicly “ordered” his attorney general to prosecute Bannon. “We’re tired of playing defense, we’re going to go on the offense on this, and stand by.”

That final phrase could be heard as Bannon saying “stay tuned”—but could just as easily be heard as him echoing Trump’s infamous comments on national TV in fall 2020 telling the Proud Boys to “stand back and stand by.”

Evidence that Bannon wasn’t just uttering the phrase off-the-cuff came that same evening. While hosting an episode of his “War Room” podcast from the Willard Hotel in downtown DC—the site of a “command center” where a Trump team worked just ahead of January 6 to deny Biden the presidency—Bannon reiterated the theme. “We’re going on offense,” he said, “and I think people just should stand by.”

At the October 20 committee hearing in which Cheney called out Trump, she also issued a stark warning. She directed it explicitly at her numerous Trump-supporting colleagues in the Republican Party, imploring them to stand up for the truth. The former president’s continuing campaign of lies, she said, “is a prescription for national self-destruction.”