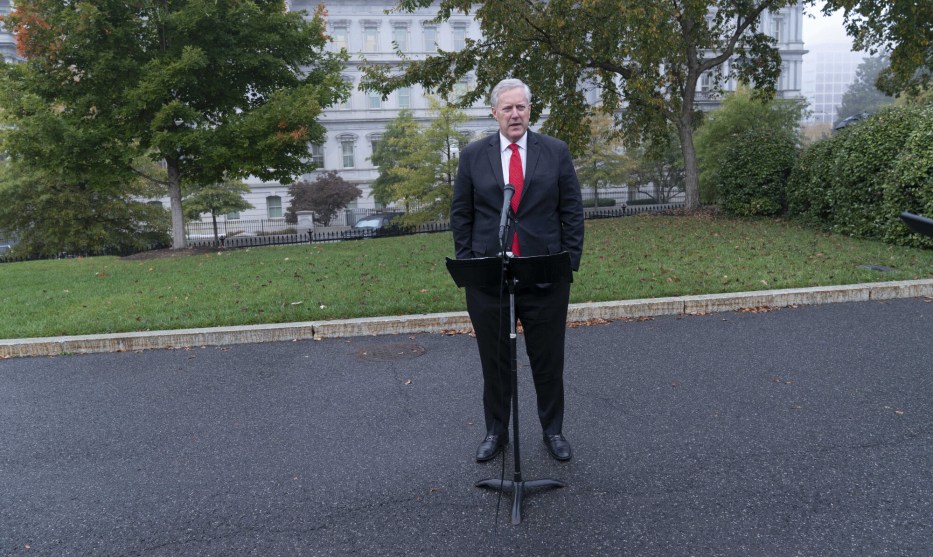 On Wednesday, Rep. Bennie Thompson (D-Miss.), chair of the House select committee investigating the January 6 insurrection, announced that his committee would move to hold former White House chief of staff Mark Meadows in contempt. The committee had first subpoenaed Meadows last month, asking him to provide documents and testify under oath about then-President Donald Trump’s attempt to seize power. Meadows at first claimed that the doctrine of executive privilege barred him from cooperating with the committee. Then he reversed himself and agreed to be deposed. In the end, according to Thompson, Meadows provided some documents but withheld hundreds of others—and offered to answer investigators’ questions only in writing, rather than submit to an interview under oath. In the wake of Thompson’s threat, Meadows responded with legal action of his own—he’s now suing House Speaker Nancy Pelosi.

That Meadows would clam up and babble about executive privilege rather than talk about his work for Trump might come as a surprise to anyone who’s been to a Barnes & Noble recently. Meadows’ tell-all book, The Chief’s Chief, hit stores on Tuesday and has been driving political news coverage for days. It is a classic White House memoir, full of dishy and self-serving tidbits. In the most significant revelation of the book, Meadows claims that Trump had actually tested positive for COVID-19 prior to participating in the first debate with Joe Biden—and before the event with Gold Star families that the president blamed for making him sick.

I don’t want to downplay the significance of a president of the United States turning himself into a bioweapon, but it’s worth considering the manner in which all of this came out—not under oath, or via a resignation letter or a whistle-blowing interview in the press, but a full year after the fact, in a transparent effort to snag a quick paycheck. (Before, presumably, Meadows lands an even bigger paycheck on the political-influence circuit.) Meadows is perfectly happy to tell people about his former boss, executive privilege be damned, as long as it’s lucrative.

Meadows is treading a familiar path. Throughout the Trump era, the people claiming to be the adults in the room never acted like adults when they were in the room. For years, former Trump officials and aides have been spilling the beans in their own books, and in those of Washington journalists. Just this summer we learned that Trump once said he thought “Hitler did a lot of good things” (John Kelly, via Michael Bender’s Frankly, We Did Win This Election), and that a White House staffer would play show tunes to calm Trump down (former press secretary Stephanie Grisham’s I’ll Take Your Questions Now). Some of this stuff might be illuminating, but it’s hardly the same thing as accountability; Grisham—who resigned two months after Trump began publicly plotting a coup—refused to hold a single press briefing during her entire stint at the White House.

The clearest precedent for Meadows’ current dance is John Bolton, who as the president’s former national security adviser was a witness to Trump’s attempts to extort the Ukrainian government into smearing Biden. As with Meadows, there were congressional investigators eager to hear Bolton’s testimony and collect a bulletproof accounting for the contemporary and historical record. In Bolton’s case, the first Trump impeachment proceedings were underway. But Bolton declined to appear in person and tell his side of the story under oath—he had a book to sell, after all.

While I would prefer that publishing houses simply not pay large sums of money to the worst people in Washington all of the time, I’ll admit that there’s some value for posterity in getting these accounts out into the public record, if only for hacks like myself to page through and fact-check. And the splashy journalistic accounts of the Trump years are a reputable, if sometimes repetitive, genre; they have helped to fill in the gaps of what we knew before—the existence of John Eastman’s coup memo, for instance, was first reported in Bob Woodward and Robert Costa’s Peril.

But saying something in a book is not the same thing as saying something under oath in a deposition—there’s a reason journalists like quoting from them so much! One is not a substitute for the other—especially when unreliable and self-serving narrators like these Trump officials are concerned. You don’t really get to control the narrative when you’re being deposed. (Although Lil Wayne tried.) There are formal functions that only Congress can serve, and cooperating with such official investigations is the minimum threshold of credibility for people who are happy to talk to everyone else; otherwise it’s all just reputation laundering and grift.

Unlike previous congressional expeditions that were stymied by Trump allies’ refusal to cooperate with subpoenas and by the crunch of time, the January 6 committee seems intent on protecting its constitutional powers, even if it means referring prospective witnesses for prosecution. (See: Bannon, Steve.) So there’s still time for Meadows to change his mind. Who knows—maybe he’ll end up with some good material for the paperback edition.