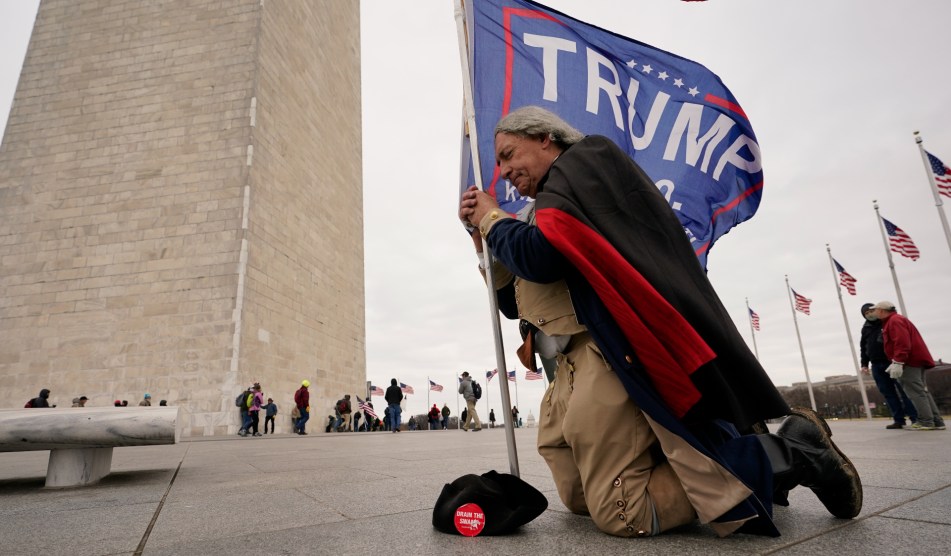 A man dressed as George Washington kneels and prays near the Washington Monument on January 6, 2021. Carolyn Kaster/AP

On the one-year anniversary of January 6, local Republican groups are planning “vigils” for those arrested for laying siege to the US Capitol.

The events are small but numerous, and their attraction to at least some mainline Republican congressional candidates shows the increasingly blurred line between the far right and the center of the party. The vigils are not a celebration of a year since the attempted coup, organizers insist. Instead, events planned around the country are set to honor the people who attempted to forcefully overturn the results of the 2020 presidential election, and portraying them as unjustly punished political prisoners.

The most noticed one so far has been organized by the Cobb County GOP in Georgia. The committee announced plans to host a watch party for the now-canceled speech that former President Donald Trump had planned to give live from Mar-a-Lago. “[A] candlelight vigil for J6 Patriots held in DC prison,” according to a flier, would follow. Georgia Democrats condemned the event, with one calling it “an homage to treason.”

A Cobb County GOP committee is holding a Jan. 6 program and candlelight vigil for the “J6 patriots” in the violent mob that overran the Capitol. The Cobb GOP was once the heart of the mainstream GOP in Georgia, but Trump’s rise has pulled the local party to the far right. #gapol pic.twitter.com/Wq35ZVRFhB

But that’s far from the only one. Michigan’s 11th Congressional District Republican Committee and the Young America First Republicans are hosting a “Bullets and Beer,” party at a gun range in New Hudson, Michigan, with “pizza, refreshments, and some great patriot speakers.” Nick Taurus, a known far-right figure and long-shot congressional candidate challenging Rep. Katie Porter in 2022, is hosting a “Patriot Martyr Vigil” outside of the Orange County FBI office.

A group called Look Ahead America, led by a one-time Trump campaign staffer named Matt Braynard, who has called January 6 “America’s Tiananmen Square,” appears to be responsible for many of the January 6 memorial events.

Jake Chansley, “the QAnon Shaman,” is advertised to be “Calling in & his Mom Martha will be our Special Guest Speaker.”

Look Ahead America announced more than 20 candlelight vigils they’ve helped organize around the country including in Washington DC, Georgia (a different location than the Cobb County GOP’s party), Arizona, Florida, Hawaii, Montana, New York, North Carolina, South Carolina, Pennsylvania, Virginia, and Texas. But it’s hard to tell how well attended the Look Ahead America vigils will be because a planned “Justice For J6″ rally in Washington DC organized by Braynard to support those arrested in the capitol riot flopped in September.

In a document of “Vigil Guidelines” available to download from their website, Look Ahead America provides tips for local event planners. They suggest “a courtesy call to your local police or sheriff’s department,” and holding the vigil at parks, churches, local city halls, or the local jail, “especially if a J6 defendant is being held there.”

Look Ahead America has scheduled two vigils outside of local jails: One at the Central Detention Facility in Washington DC (which became subject of a federal inspection for inhumane conditions, but only after arrested January 6 insurrectionists complained), and another at the Pinellas County Jail in Clearwater, Florida, where January 6 defendant, former US Army Special Forces officer and alleged Oath Keeper militia member Jeremy Brown is being held. (Look Ahead America recently interviewed Brown on the organization’s podcast.)

While the degree of Republican mobilization on the January 6 anniversary appears unlikely to reach the levels it did a year ago when the US capitol insurrection was complemented by Trump-supporting protests nationwide, the conflicting intentions of the Pinellas County Jail event organizers reflects Republicans contradictory reactions to January 6. Should it be looked back on with reverence and inspiration as the Big Lie continues? Or should they distance themselves to evade culpability and promote conspiracies of an inside job by antifa and the supposed deep state?

This bind is reflected in recent polling. According to a recent survey by Politico/Morning Consult, 40 percent of Republicans approve of the January 6 Committee. Another recent poll by UMass, Amherst, found that 71 percent of Republicans believe Joe Biden’s victory to be illegitimate. According to a statement provided by Cobb County GOP Chair Salleigh Grubbs, the purpose of their event is to “acknowledge Americans who lost their lives and to pray for those who have been denied justice.”

The statement continues: “To those who have cast quick judgment concerning this event, under no uncertain terms are we condoning any form of violence nor the glorification of what happened at the United States Capitol on January 6, 2021. This miscarriage of justice should concern ALL AMERICANS.”

Included in Look Ahead America’s vigil guidelines is a note to this effect: “Please DO NOT wear attire or bring signs referencing political parties, candidates, or other organizations. DO wear and bring patriotic clothing, American flags, and signs supporting the civil rights of our J6 defendants.”

It appears Look Ahead America’s co-organizers in Clearwater did not get the memo. The fliers from local organizer Cathi Chamberlain, author of Rules for Deplorables: A Primer for Fighting Radical Socialism, describes a “rally” with Republican state representative and 2022 congressional candidate Anthony Sabatini, along with several candidates seeking elected office in Florida.

No event sums up January 6—at once totally absurd but deadly serious—like the one planned for the Arizona capitol. Jake Chansley, “the QAnon Shaman,” is advertised to be “Calling in & his Mom Martha will be our Special Guest Speaker.”