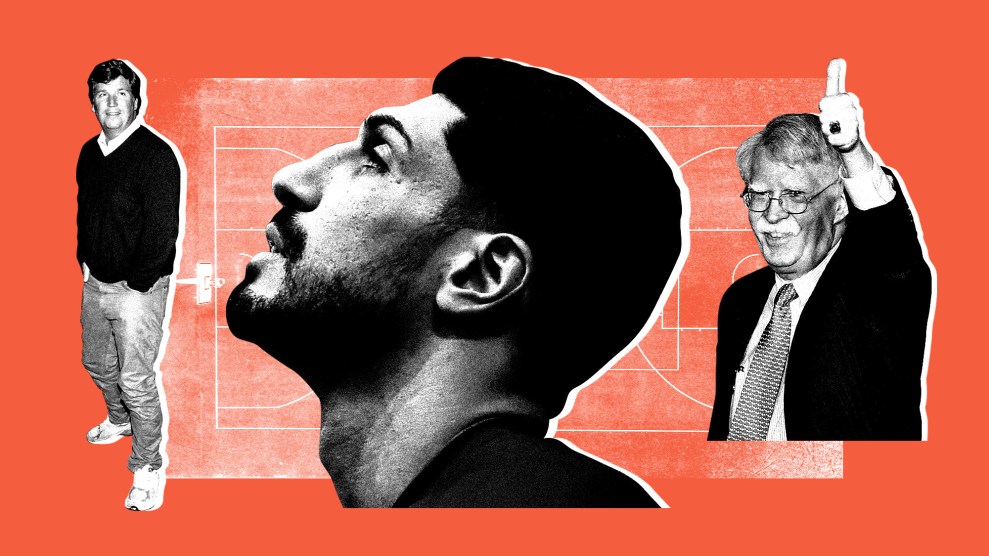 It appears that the 10-year NBA career of Enes Freedom came to an end last Thursday, when the Houston Rockets acquired him in a trade and immediately sent him packing. What the sports world treated as a routine transaction quickly sparked a free-for-all on conservative Twitter, with everyone from Matt Schlapp to Sen. Rick Scott (R-Fla.) alleging some NBA conspiracy to force him out of the league. Even Donald Trump Jr. chimed in:

The same group of woke activists that told us to “believe in something, even if it means sacrificing everything” doesn’t want anything to do with @EnesFreedom, who actually lives that phrase every day. You can always tell the difference between the grifters & the real deal. #nba

The right-wing outrage stems from the fact that Freedom, who changed his name from Enes Kanter after becoming a US citizen late last year, has in recent years become an outspoken critic of China’s human rights record—and of the NBA’s silence on the issue. That has made him a darling of American conservatives, and led to an appearance on Tucker Carlson’s show, a photo op with ultra-hawk John Bolton, an account on Gettr, the social media platform run by former Trump aide Jason Miller, and a speaking slot at the Conservative Political Action Conference at the end of February.

To understand how a 6-foot-10 journeyman from Turkey ended up getting booked at CPAC, it helps to remember the specific role the NBA has played in the culture wars these past few years. A new generation of players, led by LeBron James, started to speak out about issues of racial justice following the killing of Trayvon Martin, and that advocacy only ramped up following the election of Donald Trump, whom James famously called a “bum” in a tweet. NBA players even led a wildcat strike following the shooting of Jacob Blake. All the while, conservative commentators responded by belittling the players: Fox News host Laura Ingraham, for example, told James to “shut up and dribble.”

But the right-wing obsession with the NBA took a new turn in late 2019, when then–Rockets general manager Daryl Morey tweeted a message in support of pro-democracy protesters in Hong Kong. In response, China pulled Rockets’ games from its streaming service, leading to millions in lost revenue for the NBA. Instead of standing behind Morey and the protesters, the league—clearly mindful of its massive financial interests in China—released a Chinese-language statement that was notably more conciliatory than the English one. James, the longtime face of the both the NBA and Nike, had his own moment of ignominy, declaring that Morey was “misinformed” before posting his tweet.

Does Freedom, a devout Muslim, not know that Carlson has called Islam the “most hateful, intolerant religion on Earth”? Does he just not care?

Freedom and the right-wingers elevating him were quick to note the hypocrisy of NBA players who joined racial justice protests at home but kept silent about human rights abuses in a country where they have lucrative shoe deals. But Freedom seems to not realize that his new friends are performing the same faux-authoritarian shtick that he has spent his career opposing. Does Freedom, a devout Muslim who has spoken about fasting for Ramadan during the NBA season, not know that Carlson has called Islam the “most hateful, intolerant religion on Earth,” or that the Trump administration officials courting his support tried to ban travelers from several majority-Muslim countries? Does he just not care?

“I feel like people can change,” Freedom told the New Yorker’s Isaac Chotiner when pressed on meeting with illiberal politicians like Mike Pompeo. “I showed America one more time how important immigrants are to this country.”

Certainly there is room for an alliance of convenience, especially on foreign policy, but Freedom should interrogate why the American right is so invested in boosting his narrative. Is it because of his criticism of China or his willingness to attack Black athletes? When he appeared on Carlson’s show in October, Freedom said Americans who find fault with the United States should “keep their mouth shut and stop criticizing the greatest nation in the world,” striking a similar tone to Ingraham’s “shut up and dribble” comment from several years ago. Freedom has even leaned into the bit, saying in November on CNN that Michael Jordan “hasn’t done anything, nothing, for the Black community in America besides just, you know, giving them money.” (Jordan was no noble activist during his playing days, but it seems strange to quibble with him giving $100 million to groups fighting anti-Black racism.)

If Freedom’s goal is to “educate” other NBA players on human rights, as he has claimed, demeaning their racial justice work is not particularly helpful. “My thing was never criticizing Black athletes,” he told the New Yorker. “This is not about color. I don’t care if you’re Black, white, purple, green, whatever.”

This is just basic stuff Freedom seems to fumble over and over again. Whatever the reason, he is squandering a useful chance to start a dialogue about the intersection of US corporate interests and China’s human rights record. It’s a shame, because he’s well positioned to speak credibly about the evils of an authoritarian regime.

Only a few years ago, Freedom drew bipartisan support for a cinematically tense campaign against Recep Tayyip Erdoğan, the despotic leader of Turkey, which culminated in 2019 when Erdoğan put out an international warrant for his arrest and began retaliating against Freedom’s family back home.

Freedom’s plight garnered sympathetic coverage at the time and support from Democratic lawmakers like Oregon Sen. Ron Wyden, who urged Canada to facilitate “safe passage” for Freedom, then playing with the Portland Trail Blazers, in the event of a playoff series with the Toronto Raptors. (The Blazers lost and did not end up playing in Toronto.)

When he appeared on Carlson’s show in October, Freedom said Americans who find fault with the United States should “keep their mouth shut and stop criticizing the greatest nation in the world.”

His interest in China grew from what appears to be a sincere outrage at the treatment of Uyghur Muslims, who have been rounded up into reeducation camps as part of a campaign of forced assimilation by the Chinese government. (The United States has said this amounts to a genocide.)

“I started to study more and more. I started with the Uyghurs and then I saw what Tibet was going through, and what Hong Kong and Taiwan and Mongolians are going through. It broke my heart,” Freedom recalled. “And I’m, like, ‘It doesn’t matter what it costs. I have to bring awareness of what’s going on.'”

To the extent that he has done that, Freedom has done the world some good. His voice is plenty more useful than, say, that of Golden State Warriors co-owner Chamath Palihapitiya, who burned brain cells everywhere when he said recently, “Nobody cares about what’s happening to the Uyghurs.” (Freedom, of course, was quick to respond: “When NBA says we stand for justice, don’t forget there are those who sell their soul for money & business like Chamath Palihapitiya.”)

But with this newfound free time on his hands, Freedom would do well to invest in some better friends. He has a platform, an (occasionally) sound message, and the courage to call out hypocrisy. It is about time he found some pals who could say the same.