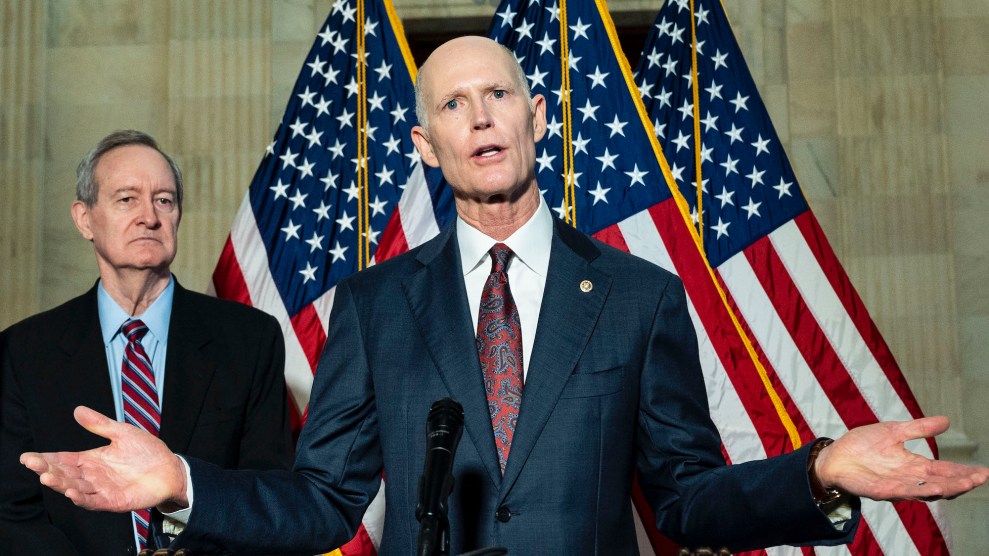 In 2016, Donald Trump became president by appealing to white people who resented both people of color and billionaires. Trump’s economic populism was always murky. Later in his presidency, he often broke with conservative economics, but that only came after self-dealing, trying to repeal the Affordable Care Act, and cutting taxes for the rich. Regardless of whether Trump actually governed as an economic populist, it was at least slightly comforting that he thought winning required pretending to care about helping working-class Americans.

Six years later, it seems Republicans are no longer trying.

The clearest evidence for that is the “11 Point Plan to Rescue America” that Florida Sen. and National Republican Senatorial Committee Chair Rick Scott released on Tuesday as his party tries to take back Congress in November’s midterm elections. Scott’s plan for saving the country contains no mention of reducing the cost of housing, health care, child care, and college. Trump’s talk about lowering prescription drug prices for seniors is gone.

Instead of economic populism, Scott is betting on a politics of pure grievance that involves blocking the government from ever asking about a person’s race, naming a border wall after Trump, and treating socialism as a “foreign combatant” (a designation usually associated with being tortured or killed by US forces). As Scott warns in his introduction, the “plan is not for the faint of heart.”

For a party theoretically obsessed with liberty, Americans of all ages will also be banned from doing, or forced to do, a remarkable number of things. Kids will have to recite the pledge of allegiance and stand for the national anthem. Transgender athletes will be barred from women’s sports. Generals who do anything deemed too woke will be relieved of their command. Immigrants will be required to love America. States will be blocked from allowing people to register to vote on Election Day.

This is not a party that’s trying to make good on the economic promises Trump abandoned.

When it comes to taxation, the IRS would see its budget cut in half. At the same time, the more than 50 percent of households that don’t make currently enough to pay federal income taxes will have to pay them. It’s a de facto policy of raising taxes on most Americans, even though Rick Scott is now trying to deny that his plan would lead to anyone paying more. This is not a party that’s trying to make good on the economic promises Trump abandoned. Sen. Marco Rubio (R-Fla.) may play footsie with supporting the Amazon union in Bessemer, Alabama, but his party’s midterm agenda has nothing to say about rebuilding unions or the middle class. It is opting instead for the usual mix of harm to the poor and hatred of the other.

Scott’s plan is a messaging document, not a guide to what Republicans would actually do if they take back the House and Senate. There was nothing stopping him from making empty promises about cutting taxes or reducing health care costs, aside from the fact that it might sound a bit rich coming from the person who oversaw the largest Medicare fraud in US history. (The only reference to the program Scott’s company defrauded is about how Congress would be be forced to produce an annual report on what it plans to do when Medicare goes bankrupt; Medicare remaining solvent is, apparently, not one of the options.)

This is not to say Republicans are proposing no new spending. To prevent abortions, low-income single women, for example, would be paid to carry children to term and put them up for adoption. The adoptive parents would then get money to take care of those kids. Parents hoping for a child tax credit to take care of children they didn’t adopt from low-income single women would be out of luck.