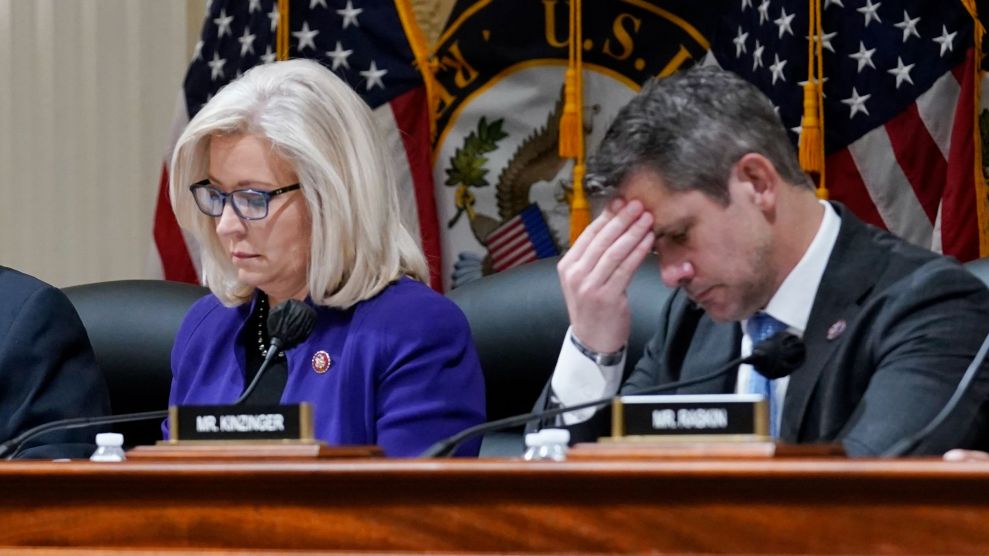 “In the lowest deep, a lower deep/ Still threat’ning to devour me, opens wide,” says Satan in Book IV of Paradise Lost. This could also be said of the Republican Party, which, already in the lowest deep, was devoured by an even lower deep today when it all but excommunicated Reps. Liz Cheney (R-Wyo.) and Adam Kinzinger (R-Ill.) for the unpardonable sin of trying to get to the bottom of the January 6 Capitol riot.

At its winter meeting, the Republican National Committee overwhelmingly voted to censure Cheney and Kinzinger, the sole Republican members of the select committee investigating the attack on the Capitol. Kinzinger, like several other Republicans who voted to impeach Donald Trump, has already announced that he won’t seek another term. But after today’s resolution, the Republican Party will officially back Cheney’s primary challenger.

The committee’s resolution reads, in part: “WHEREAS, Representatives Cheney and Kinzinger are participating in a Democrat-led persecution of ordinary citizens engaged in legitimate political discourse, and they are both utilizing their past professed affiliation to mask Democrat abuse of prosecutorial power for partisan purposes, therefore be it RESOLVED, That the Republican National Committee hereby formally censures” Cheney and Kinzinger.

WHEREAS, the Republican Party has decided that hitching its wagon to Trump is the only path forward, the draft resolution echoes some of the most extreme Trumpist talking points on the insurrection. It casts those being investigated in connection with the riot or Trump’s efforts to overturn the election as “ordinary citizens” participating in “legitimate political discourse.”

Since the storming of the Capitol, many Republicans have steadily revised their position—from denouncing the rioters to downplaying the gravity of the attack to hinting that the rioters kinda-sorta had a point. In opting to punish Cheney and Kinzinger, the Republican Party went even further, signaling that its official position going forward will be that January 6 was justified and the 2020 election was fraudulent.

The usual anti-Trump Republicans stood up for their compatriots. On Twitter, Sen. Mitt Romney (R-Utah) cast “shame” on the party (and, by extension, his niece, RNC chair Ronna McDaniel) for censuring Kinzinger and Cheney, whom he described as “persons of conscience…seeking truth even when doing so comes at great personal cost.”

Shame falls on a party that would censure persons of conscience, who seek truth in the face of vitriol. Honor attaches to Liz Cheney and Adam Kinzinger for seeking truth even when doing so comes at great personal cost.

The Republican Party has come a long way since January 6, when some of its leaders seemed, for a few brief seconds, to sour on Trump and the right-wing movement he’d harnessed. In the immediate aftermath of the riot, as Democrats announced that they would initiate new impeachment proceedings, politicians and pundits asked whether inciting a coup might be one step too far for a party that had already rationalized countless transgressions from its leader. One year later, the answer is clear.