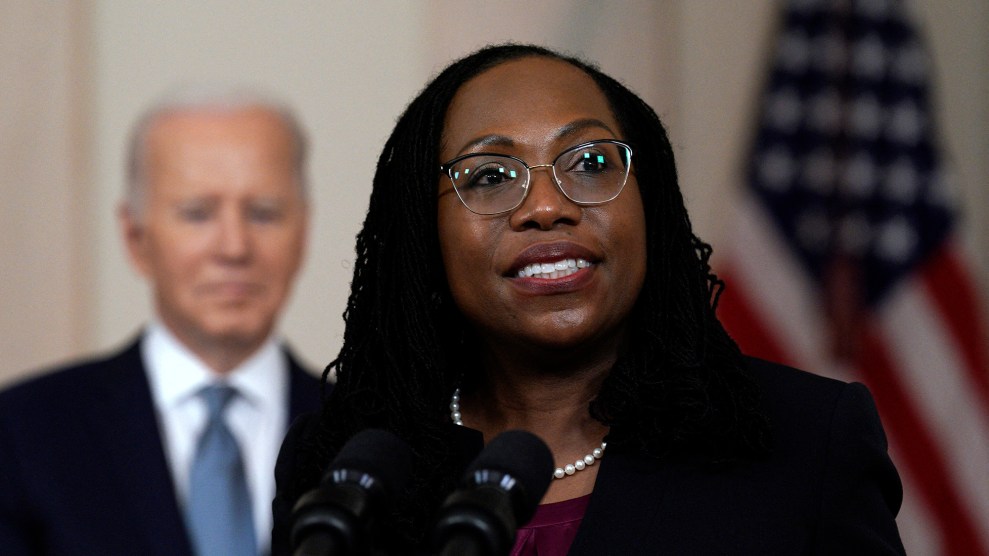 Judge Ketanji Brown Jackson speaks next to President Joe Biden on her nomination to the Supreme Court at the White House on February 25, 2022. Gripas Yuri/Abaca via ZUMA

The Republican National Committee is in full opposition mode as it seeks information to defeat the nomination of federal appeals court judge Ketanji Brown Jackson, President Joe Biden’s pick to replace Justice Stephen Breyer on the Supreme Court. But one of its accusations lobbed on Twitter Friday was quickly mocked: Jackson is a Democrat! According to the RNC, she’s registered as a Democrat. She also contributed to Barack Obama’s 2008 presidential campaign. In 2016, her husband contributed to Hillary Clinton’s campaign. The attack is silly, but it fits into the GOP’s broader attempt to paint Jackson as a “radical left-wing activist.”

Ketanji Brown Jackson is a registered Democrat. She donated to Obama’s presidential campaign – and even worked for his campaign as a poll monitor.

Belonging to the same mainstream political party as the president who nominated her isn’t surprising. And the donation that she and her husband made is negligible. But a career in politics pushing a partisan agenda is another level altogether, and not something she engaged in during her career. The same cannot be said for RNC-supported Justice Brett Kavanaugh.

Kavanaugh, who Trump nominated to the Supreme Court in 2018, was long engaged in high-level Republican politics, starting with the Republicans’ investigations of then-President Bill Clinton. As Mother Jones previously reported:

When Brett Kavanaugh was first nominated to a seat on the DC Circuit Court of Appeals in 2003, Democrats were outraged and expressed concern he was too partisan a figure to take a lifetime appointment on an important federal appellate court. Kavanaugh, at the time the staff secretary for President George W. Bush, had worked in the independent counsel’s office investigating the Whitewater land deal under Ken Starr, and co-authored the famous Starr report about President Bill Clinton’s relationship with intern Monica Lewinsky. As part of Starr’s probe of the Clintons, Kavanaugh re-opened the investigation into the death of deputy White House counsel Vince Foster, and spent millions in taxpayer money to investigate wild conspiracy theories suggesting Foster had been murdered. It took Republicans three years to get Kavanaugh confirmed to the DC Circuit.

In 2000, Kavanaugh worked on George W. Bush’s legal team in Bush v. Gore (alongside Chief Justice John Roberts and Justice Amy Coney Barrett). It’s hard to think of more partisan lawyering than fighting to stop the counting of votes to help one candidate win. Then, while in the Bush administration, Kavanaugh received information in documents stolen by a Republican staffer on the Senate Judiciary Committee and spent time working on some of Bush’s most extreme policies, including warrantless wiretapping and conversations around detaining so-called enemy combatants. When he was confirmed to the DC Circuit Court of Appeals in 2006, he misled Congress about his involvement in these scandals. Kavanaugh’s political donations, like Jacksons, weren’t big, but they did exist. Trump’s first nominee to the Supreme Court, Neil Gorsuch, had also donated to Republicans.

Of course, the RNC had no problems with Kavanaugh’s nomination, neither for his partisan past nor any other accusations against him. But then again, consistency in terms of their standards for the confirmation of Supreme Court justices is not their strongest suit.