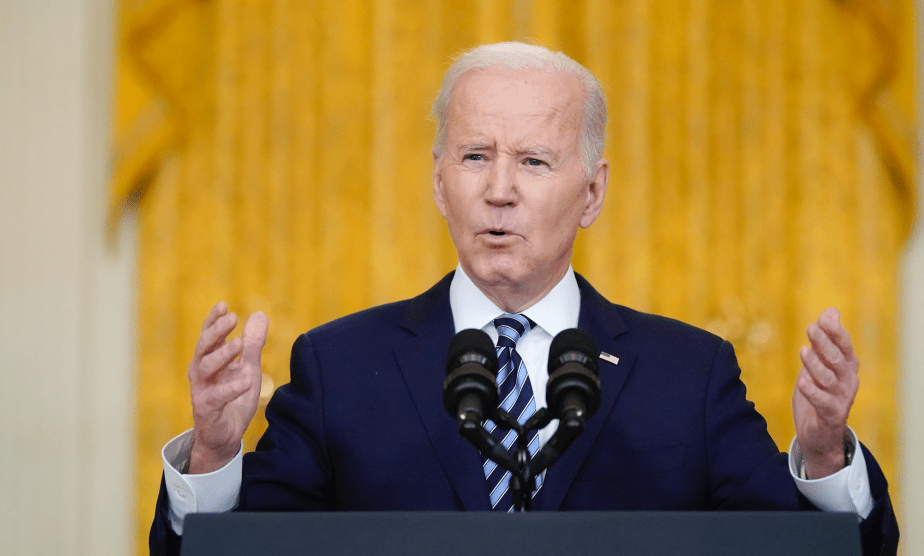 “We have purposely designed these sanctions to maximize the longterm impact on Russia and to minimize the impact on the United States and our allies,” Biden said during a televised address and press conference Thursday afternoon.

“Putin is the aggressor,” he said. “Putin chose this war.”

The measures will be enacted in partnership with 27 European allies and other countries, together representing half the global economy, the president said. They include the seizure of assets from four of Russia’s major banks and new sanctions against Russian elites and state-run companies, complementing and expanding the restrictions he announced yesterday. Biden estimated that the combined measures would cut off more than half of Russia’s high-tech imports. The new economic package, totaling trillions of dollars, stopped short of directly punishing the Russian president personally, or banning Russia from the international financial transfer system, SWIFT.

Biden also announced that additional US forces would deploy to Eastern European countries in the NATO alliance such as Poland, while reiterating his promise that US troops would not directly involve themselves in the conflict inside Ukraine.

“Our forces are not going to Europe to fight in Ukraine but to defend our NATO allies and reassure our allies in the East,” he said.

Joe Biden just called out Vladimir Putin for attacking Ukraine while announcing new sanctions against Russia: “Putin is the aggressor. Putin chose this war, and now he and his country will bear the consequences.” pic.twitter.com/I5LlJEn5AW

In line with his remarks yesterday, Biden noted that these new measures would likely have a negative impact on gas prices at home, but claimed that leaving Russian aggression unanswered would have worse longterm consequences for Americans. He acknowledged that many of the sanctions would take time to effect Russia, while urging US citizens to show resolve.

Putin “has much larger ambitions than Ukraine,” he told reporters. “He wants to, in fact, re-establish the former Soviet Union. That’s what this is about.”

Biden also touched on the prospect of a cyberwar with Russian hackers, noting that his administration had been working with private sector companies to shore up defenses. “If Russia pursues cyberattacks against our companies, our critical infrastructure, we are prepared to respond,” he said.

Biden said that he had “no plans” to talk with Putin, but warned him that even more aggressive measures would come if Russia continued to expand past Ukraine’s border.

“This is a dangerous moment for all of Europe,” he added.