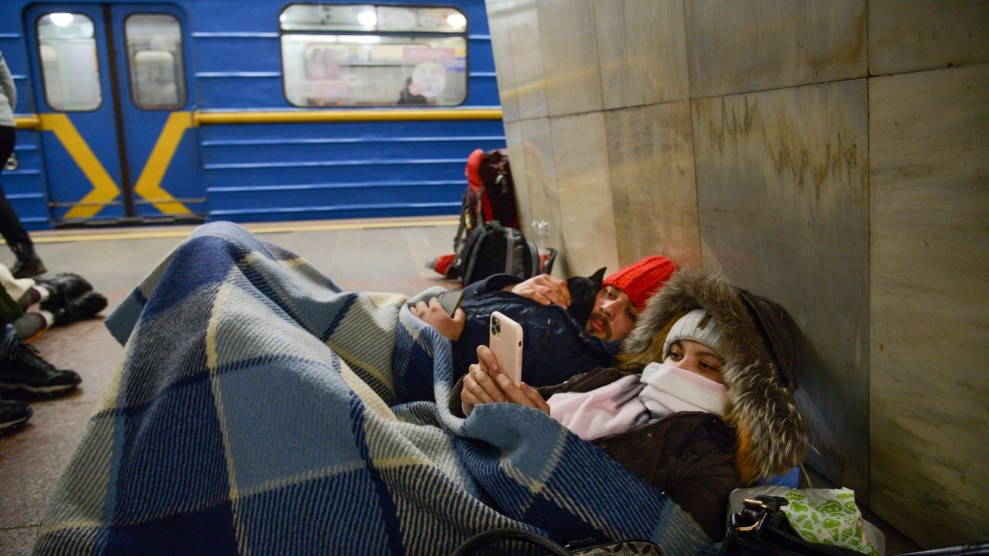 People lie in the Kyiv subway, using it as a bomb shelter following the Russian invasion of Ukraine on Thursday, Feb. 24, 2022.Zoya Shu/AP

Russia’s military invasion of Ukraine on Thursday portends a deep, destructive conflict that could create millions of refugees and cause a spiraling crisis for Eastern Europe. Ukraine, the continent’s second-largest country by area, appears to be under siege from its north, east, and south by Russian troops.

For Ukrainians, this escalation is only the latest dark twist to a decades-long border struggle that turned hot in 2014 after Russian President Vladimir Putin annexed the Ukrainian region of Crimea. Intermittent fighting has continued ever since, mostly siloed in eastern parts of Ukraine that are dominated by pro-Russian separatists.

Earlier this week, Putin recognized two of these areas, Donetsk and Luhansk (known collectively as the Donbas region), as independent states, a prelude to Thursday’s invasion. But Putin’s military focus has already spread to the rest of the country. Western intelligence officials predict that the Ukrainian capital, Kyiv, may fall within hours.

Even before the invasion, Ukraine was home to one of the more under-covered humanitarian crises in the world. More than 3 million people in the country require humanitarian assistance, according to a United Nations report released last year. Ukrainians, especially in Donbas, face record-high levels of displacement and exposure to landmines.

To better understand the growing crisis and what Americans (and their government) can do to help, I spoke with Jacob Kurtzer, director of the Humanitarian Agenda at the Center for Strategic and International Studies in Washington, DC, who also worked for nearly a decade at the International Committee of the Red Cross. We discussed the most pressing concerns for Ukrainians, the possibility of refugees fleeing the country, and the role of Ukraine’s neighbors and allies in resisting Russian aggression.

Ukraine has been fighting Russia for nearly a decade, so this need for a humanitarian response is not new. But what has the response looked like up until now and how do you expect it to change now that Russia has launched a full-scale invasion?

The situation that we’re looking at today represents either an escalation of a conflict from 2014 or the resumption of a conflict that started in 2014. Since that time, you’ve had a geographic area that’s been divided with a contact line [dividing government-controlled areas from ones run by pro-Russian separatists]. That division has separated families and prevented civilians from accessing basic goods and services. It created a very challenging work environment for non-governmental organizations and civil society organizations to respond. Those barriers to movement and to access have just really inhibited people’s free flow of movement.

The conflict had reached relatively low intensity over the last few years, but the impacts of the conflict from when it was hot were destruction and deterioration of basic infrastructure, including health facilities, but also damage to water and sanitation systems. You also had the remains of a lot of unexploded ordnance.

Yeah, Ukraine has among the most landmines of any country in the world, I believe.

A lot of individuals continue to be impacted by that time, in terms of death and injury. So you start with a group of people in Donbas that are vulnerable, that require the support of non-governmental, civil society organizations. You still have internally displaced people inside Ukraine from that time period.

The question of internal displacement has already haunted Ukraine, but with this invasion, we can certainly expect refugees to spiral out into Eastern Europe. Can we expect Ukraine’s neighbors to be receptive to helping?

I think forced displacement is going to take a lot of different trajectories. We’re so early into this crisis that it remains a bit uncertain because the Russian attack, to a certain extent, mitigates against people having the choice of where to go, should they be choosing to flee areas for their safety.

There have been attacks from from Belarus, in the far west of Ukraine, that border some of the routes of egress out of the country. The same in the south from the sea. I think we will see a lot of internal displacement, but the dynamics of it are to be determined. And we will see refugee outflows, and we’re already seeing that.

Right now, my sense is—and, of course, all of this is uncertain—but the strikes may add a prevailing sense in most neighboring countries of solidarity with the civilian population. I do think you will see neighboring countries, at least in the early stages, opening their borders and expressing their solidarity through efforts to provide safe refuge for Ukrainian civilians fleeing the conflict. That necessitates a robust response on the part of everyone else: our European allies, the United States government itself, the governments of Canada and Australia, Japan, and everyone else who has expressed their robust disapproval for Russian action.

That’s well said. What is the state of humanitarian assistance to Ukraine right now? Are there groups in Ukraine receiving significant funding from the West? How can these groups best be supported going forward?

As of yesterday, there was a relatively small humanitarian response program in Ukraine. Compared to Afghanistan and Yemen and Syria, it was small and relatively poorly funded.

Identifying and supporting the existing organizations that do work in those countries, and not creating parallel structures, so to speak,  is really essential. And so I think there’s a need for really robust engagement with the governments and with the non-governmental communities in Poland, Romania, and Moldova, and elsewhere, to ensure that the basic needs of these communities are met until such time as people can return home safely and with dignity.

How can people help, either by donating or supporting some of those groups?

Identifying the trusted actors, who are frontline responders doing the work. That is where I would encourage people who are concerned for the civilian impact to focus their energy.

I do think people should be very wary of where they’re spending their money because this conflict in particular has been characterized by misinformation and disinformation. It is extremely important to know that the money you’re spending is ending up in the right hands for the right reasons.

This conversation was edited for length and clarity.