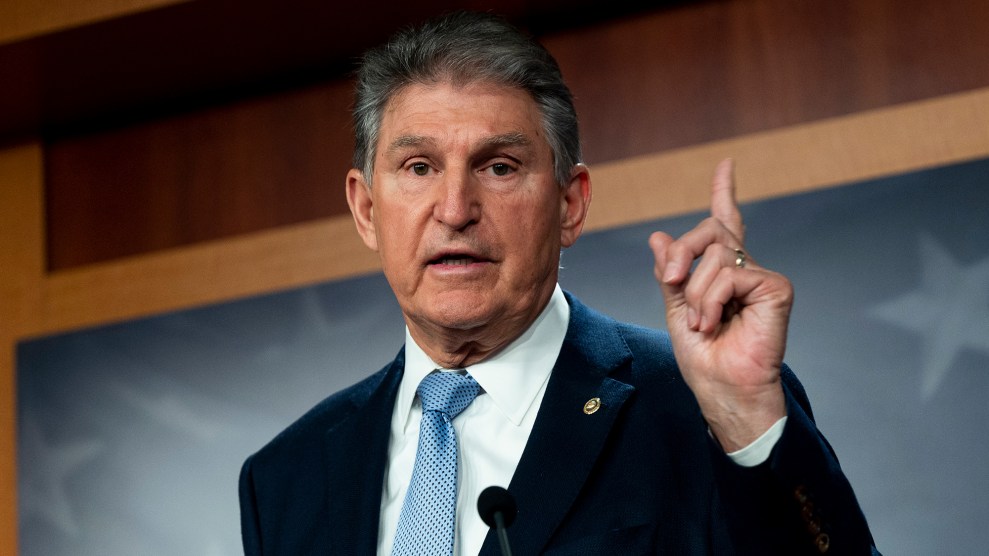 Another day, another foiled billionaire tax.

To help fund his agenda, Biden wants to impose a minimum 20 percent tax on the total incomes of Americans (not just billionaires) with a net worth of $100 million-plus. Twenty percent may not sound like much, given the current 37 percent marginal tax rate on incomes north of $647,850 for a couple. But because dudes like Bill Gates, Elon Musk, Jeff Bezos, and even Warren Buffett structure their finances to avoid taxable income, the administration is redefining income here to include the paper profits on unsold stocks and other assets.

The administration aimed to avoid a wealth tax like the one previously introduced by Sen. Elizabeth Warren (D-MA)—which, as the Wall Street Journal’s Richard Rubin and others have explained, is more constitutionally complicated. To be fair, even this Biden plan would have faced legal challenges. Manchin’s opposition also doomed a proposal last year from Sen. Ron Wyden (D-OR), to tax the gains of billionaires on their unsold assets.

It’s this taxing of paper profits that Manchin now claims he opposes—“[y]ou can’t tax something that’s not earned,” he told The Hill—and he posits that there are better ways to make the rich pay their fair share. For example, Manchin has previously said he would support higher rates on individual and corporate earnings.

But that’s just virtue-signaling; Biden, too, wants to raise the top marginal tax rate and boost the corporate income tax from 21 percent to 28 percent. (It was 35 percent before Trump came along.) Manchin knows his Democratic partner in spoilage, Sen. Krysten Sinema, opposes any such rate increases. So he gets to sound like a man of the people without risking the wrath of his golf buddies and coal-industry partners.

Timothy Noah, writing for The New Republic, makes that case that Biden’s “billionaire” tax also amounts to virtue-signaling. Biden had to know it would never fly, Noah argues, but supporting a DOA stick-it-to-the-moguls plan gives political cover to Democrats who would rather not offend wealthy constituents by boosting their taxes before the midterms. I agree with Noah that the effort was doomed from the start, and that, as I’ve previously written, such a tax, as popular as it may be with the public, isn’t the best way to tackle wealth inequality, if that’s your goal.

One of the best ways to narrow the wealth gap (an idea Biden’s budget revives for households with incomes of $1 million or more) is to tax the profits from sales of stock and other assets—a.k.a. capital  gains—at the same rate as ordinary work income. The proposed $1 million cutoff is generous—too generous, really. A family with taxable income of $500,000 in 2021 paid 35 percent on the highest tranche of their work earnings but only 20 percent on capital gains. A household with $400,000 in income paid a maximum of 32 percent on wages, but only 15 percent on capital gains.

It’s clear how this two-tiered tax treatment favors America’s most affluent, who own most of, well, everything! As of late 2019, according to a Goldman Sachs analysis I came across while researching my recent book about wealth in America, the richest 1 percent of the population owned 56 percent of all US equities, public and private, totaling $21.4 trillion. Further down the economic ladder, economists Emmanuel Saez and Gabriel Zuckman calculate that the least-wealthy 40 percent of the population, collectively speaking, own no assets at all—zero, nada. That’s only possible because the lowest quintile has negative wealth. Just debt.

Congress “completely blew it” when it tried to place limits on the trusts rich families used to reduce estate taxes. The cure was worse than the disease.

Biden’s budget plan recycles a bunch of proposals from the reconciliation bill that were intended to curb the insane tax perks of the super-rich, including eliminating the “step-up” rule that lets wealthy heirs avoid paying capital gains taxes on stocks and other assets they inherit from mommy and daddy (or daddy and daddy, etc.)

Biden also hopes to neuter grantor-retained annuity trusts, or GRATs, the vehicle of choice for dynasties to get around gift and estate taxes. The most popular version is known as a “Walton GRAT” because it was battle-tested in a case pitting the IRS vs Alice Walton, the late sister-in-law of Walmart founder Sam Walton. She lost her case in tax court, but won on appeal.

GRATs and related charitable vehicles known as CLATs, or “Jackie-O” trusts, are the key tools by which super-wealthy families transfer epic sums to their offspring without paying Uncle Sam a dime. When Congress enabled GRATs circa 1990, it did so by accident. Lawmakers were trying to curb the use of another trust (the GRIT) as a tax-avoidance scheme. But clever lawyers, including Alice Walton’s, quickly realized the cure was worse than the disease.

That lawyer was Richard Covey, who admitted to me that Congress “completely blew it.” When you put assets in a GRAT, the trust pays you back the initial value of those assets (plus interest) as annual installments. Any assets remaining in the trust at the end of its designated term—which can be as little as two years—go to your heirs tax-free. If those assets—say, shares of stock—decline in value, hey, it’s a wash. You get the shares back. But if they take off, your kids get a huge, tax-free windfall, one that doesn’t even count toward your generous lifetime gift/estate tax exemption, now $23.4 million for a married couple.

For GRATs, most people use assets that are worth little now, but are likely to explode in value, like shares of a pre-IPO stock or an interest in a new private-equity partnership. Super-volatile stocks work well, too. A common strategy is to parlay whatever assets the trust pays you back each year into a new GRAT. People set up a series of interlocking two-year GRATs as a way to catch volatile assets when they’re on the upside. You don’t always win, but you can’t lose.

How big a fiasco is this? Well, the federal government imposes a 40 percent tax on inheritances exceeding $24.4 million—the lifetime exemption plus another $1 million, which is taxed at a lower rate. Yet according to a 2020 paper by Lily Bachelder, now the Treasury Department’s top tax policy official, the effective tax rate paid on US inheritances is a scant 2 percent.

Which means GRATs, beyond the bad optics, cost taxpayers a lot of money. They are very widely used. In 2008, according to SEC documents, Mark Zuckerberg, Dustin Moscovitz, and Sheryl Sandberg placed millions of cheap, pre-IPO Facebook shares in annuity trusts. In 2013, Bloomberg reporter Zachary Mider revealed how billionaire GOP megadonor Sheldon Adelson used a series of GRATs to funnel nearly $8 billion to his offspring, circumventing billions in federal gift taxes. This past September, ProPublica reported that more than half of America’s wealthiest people, including Michael Bloomberg, had used GRATs. And why not? Dynasties don’t get to be dynasties by rejecting free money from the government.

I asked Covey, shortly before the 2020 election, why Congress had never fixed its blunder? You’d need a Democratic trifecta, he said. And now we have one—kind of.

Indeed, the Biden administration now proposes to “impose some downside risk” so that GRATs “are less likely to be used purely for tax avoidance purposes.” (Zach Mider found this framing hilarious: “Has anyone EVER used a GRAT for anything but pure tax avoidance?” he commented to one of my tweets.)

But even with a trifecta, such things are a low legislative priority. Tax law is so arcane and boring that the public tunes out—perhaps that’s the point—whereas the tax lawyers, accountants, and investment managers who comprise the wealth defense industry lobby like hell to retain regressive dynastic perks like GRATs and carried interest and generous tax rates on corporate income and investment profits, not to mention expensive savings subsidies, popular with both parties, that help the rich retire richer. (A bill that would further expand these subsidies just passed the House, 414-5.)

Given that the Democrats failed to enact any of the proposed changes when they first came up last year, the notion that they’ll succeed now, before the midterms, seems far fetched. Policymakers have long known what’s needed to curb runaway wealth inequality. But the political will to act upon those things lies twitching on the floor. And the band plays on.

This article was revised to clarify the nature of Sen. Ron Wyden’s billionaire tax proposal, which Joe Manchin also rejected.