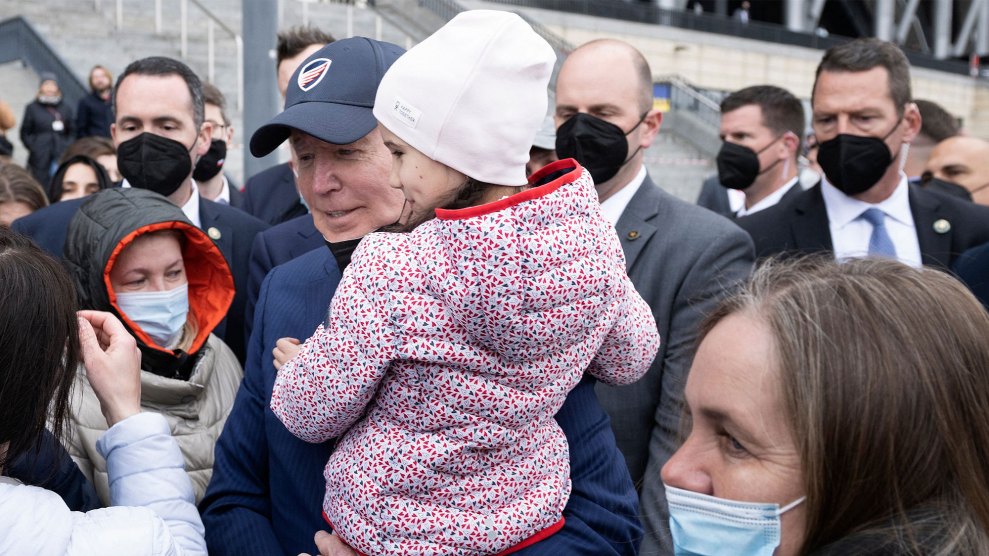 It was no surprise that Biden’s scripted speech on Saturday from Warsaw, Poland, about the Russian invasion of Ukraine would make international headlines. But what has dominated the conversation is his apparently unscripted remark at the end about Vladimir Putin. “For God’s sake,” the president said, “this man cannot remain in power.”

The Sunday morning news shows were packed with Democrats, Republicans, intelligence experts, and the Ukrainian Ambassador to the US providing an array of reactions to Biden’s remarks. The top Republican in the Senate Foreign Relations Committee called it a “horrendous gaffe,” on CNN’s State of the Union. Sen. James Rish (R-Idaho) first praised Biden’s speech saying “Whoever wrote that speech did a good job for him.” And then pivoted, “But my gosh, I wish they would keep him on script.”

Not long after Biden’s speech Saturday the White House insisted that Biden was not advocating for a regime change. “The president’s point was that Putin cannot be allowed to exercise power over his neighbors or the region,” a White House official told reporters. “He was not discussing Putin’s power in Russia, or regime change.”

During a press conference in Jerusalem, Secretary of State Antony Blinken stated, “I think the president, the White House, made the point last night that, quite simply, President Putin cannot be empowered to wage war or engage in aggression against Ukraine or anyone else.” He continued, “As you know, and as you have heard us say repeatedly, we do not have a strategy of regime change in Russia or anywhere else, for that matter.”

Indeed, Biden himself is acutely aware of the importance of the president’s words. As the Washington Post reported,  “During his presidential campaign, President Biden often reminded his audience about the heavy weight that the words of a president can carry. ‘The words of a president matter,’ he said more than once. ‘They can move markets. They can send our brave men and women to war. They can bring peace.’”

On Sunday, Rep. Ro Khanna (D-Calif.) also attempted to further clarify what Biden meant. Khanna told Fox News Sunday that Biden was likely “frustrated” after meeting with Ukrainian refugees, and that “there’s no support in the Democratic Congress for regime change. We’ve been the party against regime change for the past 20 years.”

But that may not be how everyone interpreted it. Republican backlash continued Sunday with a Republican lawmaker saying that while he knew the statement was “off the cuff, whatever the president says carries a lot of weight.” He called Biden’s comments a provocative message to Putin, adding that “anytime the United States has spoken out for a regime change [it] has not worked out so well.”

Meanwhile, Ukrainian ambassador Oksana Markarova appeared on Meet the Press and said Ukrainians heard Biden “loud and clear.” She said that anyone who is a war criminal and attacks a neighboring country “definitely cannot stay in power in a civilized world,” and that it’s “up to all of us” to stop Putin now because this war is not only about Ukraine. “It’s a brutal genocide attempt to eliminate or exterminate [the] Ukrainian nation,“ she said, “but also an attack on democracy, an attack on anyone who wants to live peacefully in their own country.”

As my colleague Dan Friedman reported Saturday, the White House has generally won high marks for avoiding policies or rhetorical excesses that could increase the risk of US conflict with Russia.

But Biden’s comment Saturday marked the second time on a four-day trip to Europe that the president has appeared, intentionally or not, to exercise less restraint in his remarks. On Friday, speaking to US troops stationed in Poland, Biden told them: “You’re going to see when you’re there—some of you have been there—you’re going to see women, young people, standing in the middle, in front of a damn tank, saying, ‘I’m not leaving.'” That seemingly errant line implied US troops might be deployed to Ukraine.

“The president has been clear we are not sending US troops to Ukraine and there is no change in that position,” a White House spokesperson told Fox News later Friday.

So while US politicians and commentators dissect Biden’s statement, the Kremlin spokesperson Dmitri Psekov made it clear that whether or not Putin stays in power is “not for Biden to decide.” Peskov told reporters  after Biden’s speech, “The president of Russia is elected by the Russians.”