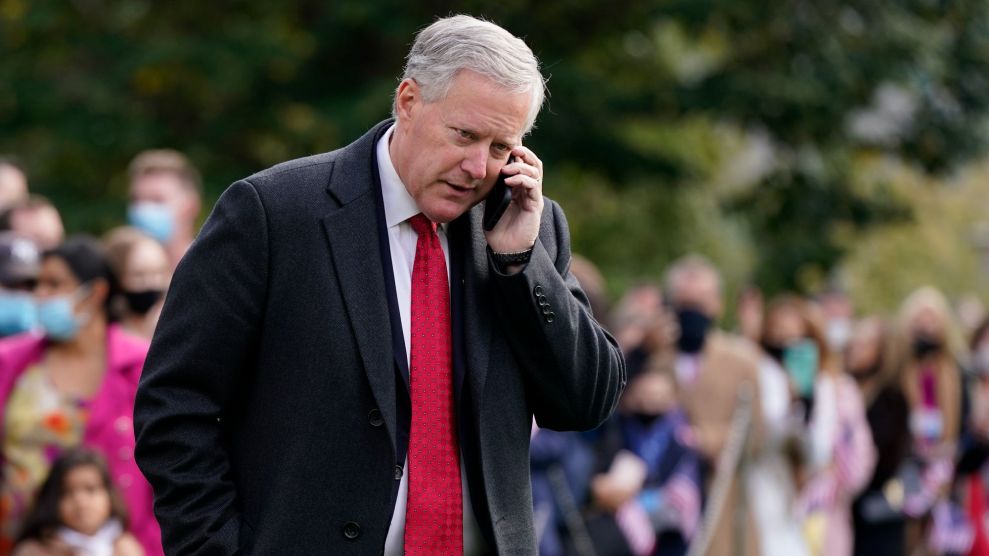 In his memoir, The Chief’s Chief, published almost a year into Joe Biden’s presidency, Mark Meadows voiced concern about voter fraud, heavily implying that it had tainted the legitimacy of Biden’s victory.

“If we could get a few more Republicans to show up in places like Minneapolis and Bemidji in November, we would be able to win not only Minnesota, but the whole election—assuming, of course, that everyone else who votes was alive, a real person, and an actual resident of the state they were voting in,” wrote Meadows, Donald Trump’s former chief of staff. “That last part turned out to be a little harder than we thought.”

Most allegations of voter fraud in the 2020 election have been roundly debunked by media outlets, election administrators, and the courts. But as it turns out, Meadows might have been speaking from firsthand knowledge, according to new reporting from the New Yorker.

In September 2020—about a month after Meadows had decried voter fraud in an interview with CNN’s Jake Tapper—Meadows and his wife, Debra, listed a 14-by-62-foot mobile home in North Carolina as their address in voter registration forms, the New Yorker noted. The property’s former owner told the magazine that Debra Meadows had rented the place for two months sometime within the last few years but that she had only stayed there one or two nights. Mark Meadows, she claimed, had never stayed at the home at all.

Under North Carolina law, people are required to have lived in the county where they’re registering for at least 30 days before the date of the election. Upon Meadows’ appointment as Trump’s chief of staff in March 2020, he and his family sold their house in Sapphire, North Carolina, and moved to Alexandria, Virginia, outside Washington, DC, leaving them with no place of residence in their former home state.

Local news outlets and the Washington Post have since confirmed many of the New Yorker’s allegations and fleshed out new details. In both documents, Meadows and his wife represented “under penalty of perjury” that they were moving to the mobile home on September 20, 2020, the day after the voter registration forms had been filed.

Upon reading the New Yorker’s reporting, Steven Greene, a professor of political science at North Carolina State University, told the Post that, he found it “honestly hard to see how this is not a clear violation of federal law.”

According to documents obtained by local news outlet WRAL, Meadows later used the same address to request an absentee ballot on October 1, 2020, even as he joined his boss in attempting to discredit mail-in voting. He also attempted to pressure both the FBI and the Department of Justice to look into Trump’s claims of widespread voter fraud.

We tried to reach out to Meadows through multiple channels—his lawyer, his spokesperson, and his current employer—to see if he wanted to dispute any of the allegations in the New Yorker or Washington Post pieces. We received no response.