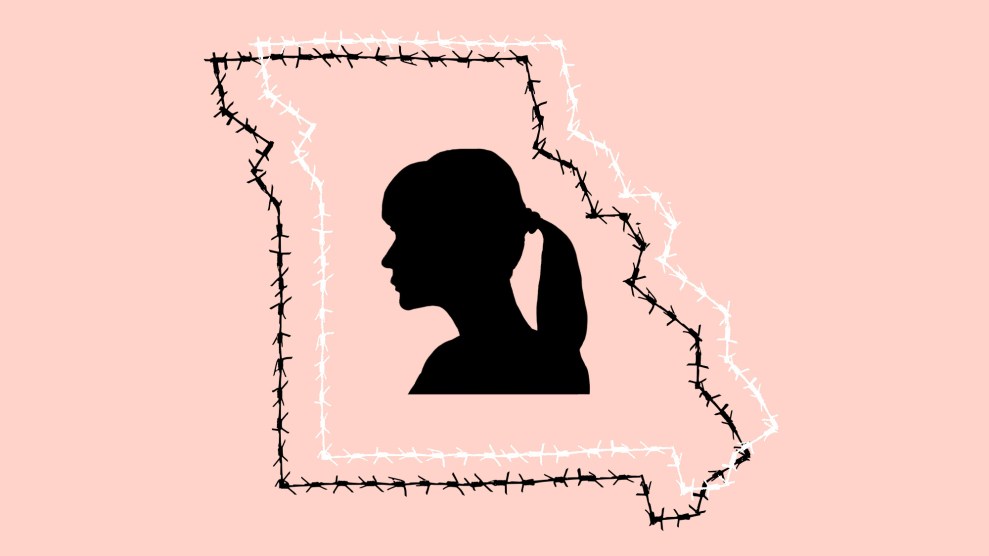 A Missouri lawmaker wants her state to follow in Texas’ footsteps and outlaw almost all abortions through the use of a citizen-enforced ban. But Republican Rep. Mary Elizabeth Coleman hopes to take the Texas framework even further—literally outside the boundaries of her state.

Since September, Texas has stopped nearly all legal abortions after roughly six weeks gestation by deputizing individuals to sue anyone who performs the procedure, or aids and abets anyone seeking one. Coleman’s proposed legislation would not only allow citizens to sue anyone who performs an abortion for a Missouri resident, but anyone who helps or even attempts to help a Missouri resident seek an abortion in or out of state. In other words, Missouri’s law would come for people outside of Missouri.

“The only difference is that time has gone by.”

While this could be considered a step forward in the development of citizen-enforced rights-abridging laws, historically, it looks like a giant step backward. The most notorious corollary are the Fugitive Slave laws, which required the recapture and return of enslaved people who made it to free states—and put anti-slavery Northerners at risk of arrest, fueling resentments that led to the Civil War.

“When you look at the Texas law, it has all of the features and ingredients of the Fugitive Slave laws,” says Michele Goodwin, an expert in constitutional law and reproductive rights at the University of California-Irvine School of Law. “To understand the pernicious underbelly of the Texas law means situating it alongside other successful laws that sought to shackle individuals and keep them from gaining their fundamental human rights.” Rep. Coleman’s innovation, like the Fugitive Slave laws’, is to expand this regime nationwide.

Congress passed the first Fugitive Slave law in 1793. More than five decades later, with slavery tearing the country apart, Congress passed the Compromise of 1850, which included the even more stringent Fugitive Slave Act. In order to stop more slaves from fleeing north to secure freedom, this act set up a government-enforced system for returning escaped slaves to their owners. The law made it a federal crime to help a fleeing slave, imposing “a fine not exceeding one thousand dollars, and imprisonment not exceeding six months.” It also required everyone to aid in the capture of fleeing slaves, stating that “All good citizens are hereby commanded to aid and assist in the prompt and efficient execution of this law, whenever their services may be required.”

There’s a sense portrayed in coverage of the Texas abortion ban of how it has been a brilliant innovation for the anti-abortion movement; that the use of private citizens enforcement has stumped the courts and finally helped them circumnavigate Roe v. Wade. Three times since September, the US Supreme Court has allowed the Texas ban, in direct violation of Roe, to remain in effect. The New York Times has called the Texas law “audacious” and “unconventional” and the courts “flummoxed.” But it’s no coincidence that the Supreme Court has allowed Texas to evade Roe just months before it is expected to either gut or strike down the landmark ruling itself. It may look like brilliant lawyering, but when placed in context, it better resembles previous attempts to rein in the rights of others. The Supreme Court, for most of its history, has abetted those attempts. It even upheld the Fugitive Slave laws.

“Not only were the Fugitive Slave acts not held unconstitutional by the United States Supreme Court, we see these features of the Texas law not being deemed as unconstitutional. And they mirror each other,” says Goodwin. “The only difference is that time has gone by.”

“The Fugitive Slave law became a weaponized tool wherein private individuals could literally and under protection of law surveil, stalk, kidnap and apprehend individuals and receive a bounty for doing so,” she added. “It incentivized the worst of behaviors of private citizens.” Today’s laws targeting abortion offer a troubling echo. “It’s meant to chill conduct. It’s meant to inspire fear in people so that they will not be supportive,” says Goodwin.

In another eerie echo of the past, California is taking steps to become a “sanctuary state” for women who need to access abortion outside their home states. These converging trends set the stage for legal conflicts where people risk punishment in one state for helping women exercise rights legal in another.

In Missouri, not only does Coleman want to enlist private citizens to stop the state’s residents from obtaining an abortion, the representative also hopes to enlist everyone in monitoring Missouri’s teachers. In a separate bill she introduced in January, Coleman proposed schools hew to a curriculum with an “overall positive and comprehensive history and understanding of the United States.” Conservative school activists pushing such legislation have focused attacks on examinations of how slavery’s legacy shapes our current law and society. Would Coleman’s education agenda leave any room for a historical critique of her own abortion legislation?