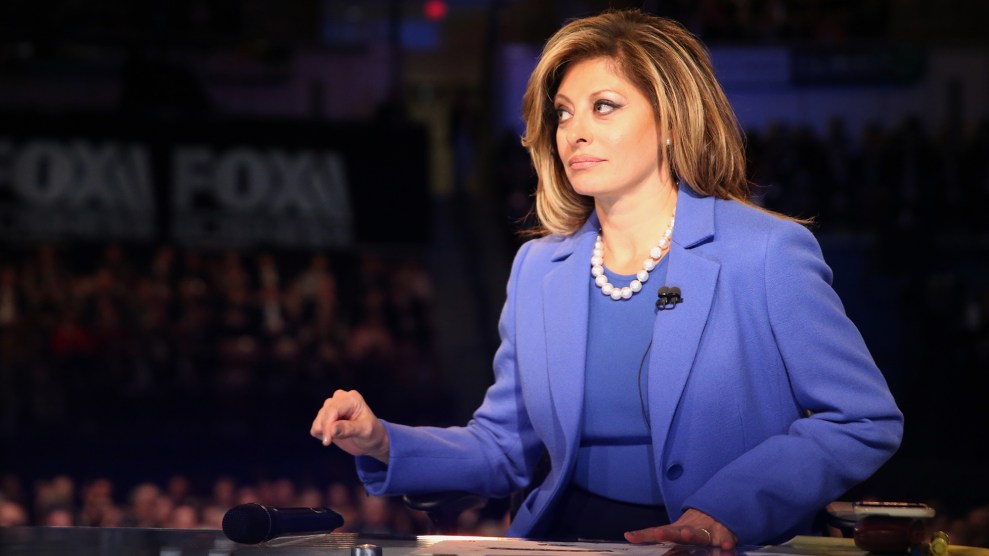 Fox News star Sean Hannity has a go-to response for when he’s accused of flagrant violations of journalistic ethics: He never claimed to be a journalist in the first place! However unconvincing, that excuse, combined with his vaunted perch at Fox, has allowed the talk show host to survive scandals that would have blacklisted lesser stars at any normal news outlet.

Fox anchor Maria Bartiromo, on the other hand, claims that she’s a journalist all the time.

Before the Trump years, Bartiromo had developed a reputation as a serious business reporter, who, despite being a bit deferential to Wall Street, made history by becoming the first to broadcast live from the New York Stock Exchange. Punk legend Joey Ramone even wrote a song about her.

Unfortunately, Bartiromo’s hard-won reputation started to unravel when she began to give voice to Trump’s baseless lies about election fraud. (She’s currently a defendant in a lawsuit brought by voting company Smartmatic, who was falsely accused of participating in an election-rigging conspiracy.) And on Friday, Bartiromo’s credibility took another hit when CNN published texts from the cache of correspondence that Trump Chief of Staff Mark Meadows handed over to the January 6 committee.

Among them was this jaw-dropping Nov. 29 exchange between Bartiromo and Meadows, regarding an upcoming interview with Trump. In the texts, Bartiromo feeds Meadows the questions she plans to ask the president, and even sketches an answer for him, suggesting that Trump cite a thoroughly unconvincing article published by the far-right news site the Federalist.

Hi the public wants to know he will fight this. They want to hear a path to victory. & he’s in control,” Bartiromo texted at 9:21 a.m. “1Q You’ve said MANY TIMES THIS ELECTION IS RIGGED… And the facts are on your side. Let’s start there. What are the facts? Characterize what took place here. Then I will drill down on the fraud including the statistical impossibilities of Biden magic (federalist). Pls make sure he doesn’t go off on tangents. We want to know he is strong he is a fighter & he will win. This is no longer about him. This is about ????. I will ask him about big tech & media influencing ejection as well Toward end I’ll get to GA runoffs & then vaccines.

Less than an hour later, Trump gave Bartiromo his first interview since Election Day. Her line of questioning was more or less the same as what she described in the texts. Despite Bartiromo’s plea for Trump to stay on message, the former president went off on a tangent, talking not about evidence of fraud but about the fact that “leaders of countries” had called him up to say that “that’s the most messed up election we’ve ever seen.”