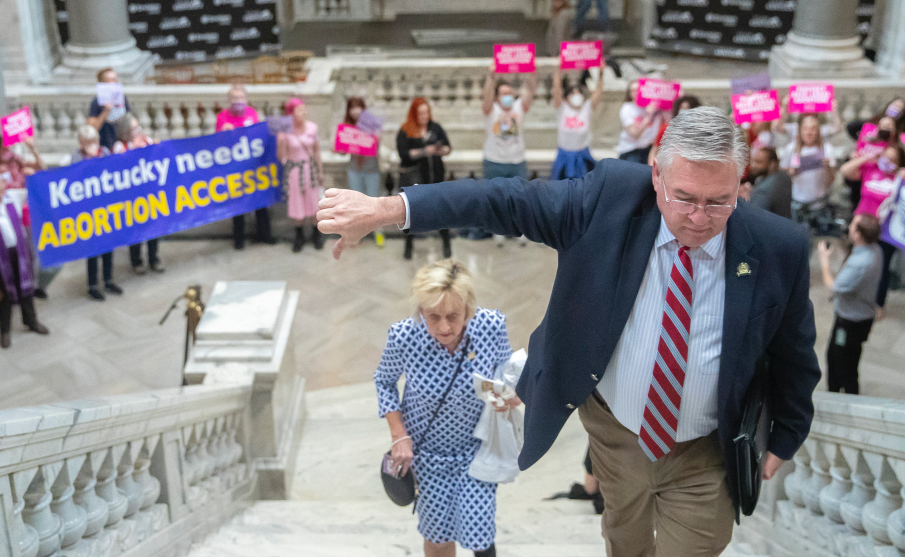 State Rep. Randy Bridges (R-Paducah) gives a thumbs down as protesters chant "Bans off our bodies" at the Kentucky state Capitol.Ryan C. Hermens/AP

The only two abortion clinics in Kentucky have been forced to shut down, effectively ending the procedure in the entire state, after the Republican-controlled Kentucky General Assembly on Wednesday overrode the governor’s veto of an extremist bill that included a 15-week abortion ban without exemptions for cases of rape or incest.

In a statement, Planned Parenthood, which operates one of the two clinics, said that the “laundry list of onerous and unnecessary requirements” in the bill known as HB 3 made it untenable for it to continue care without potentially running afoul of the new law.

“If a mother can kill her own child, what prevents us from killing ourselves and one another?” State Sen. Stephen Meredith said in his remarks overturning Gov. Andy Beshear’s veto.

The Kentucky law went into effect immediately. It comes as the latest front in the war on abortion that has swept red states over the past year ahead of the Supreme Court’s likely decision to overrule Roe v. Wade later this year. As noted in Tuesday’s newsletter, a similarly draconian ban was signed into law in Oklahoma just this week:

The law threatens abortion providers with a felony, punishable by up to a decade in prison, and allows for only one exception: procedures necessary to save the life of the mother. Under the law, which is scheduled to take effect this summer, people who have been impregnated as a result of rape or incest will have to carry their pregnancies to term.

But it’s important to note the ripple effects these laws have on women who travel to nearby states in search of providers to perform abortions:

The effect of the Oklahoma ban won’t be limited to within the state’s borders. When the Texas “bounty hunter” law went into effect in September 2021, Oklahoman abortion providers served a higher proportion of women who left Texas for abortions than any other state—a good 45 percent of patients, according to researchers at the University of Texas, Austin. With that path soon to be closed off, women in both Oklahoma and Texas will have to seek the procedure in a fast-shrinking number of locations.

That domino effect is likely intentional—and has accelerated the rise of clandestine underground abortion networks throughout the country. Meanwhile, abortion advocates, including those in Kentucky planning to sue the state for HB 3, say that the new bans are very likely unconstitutional.