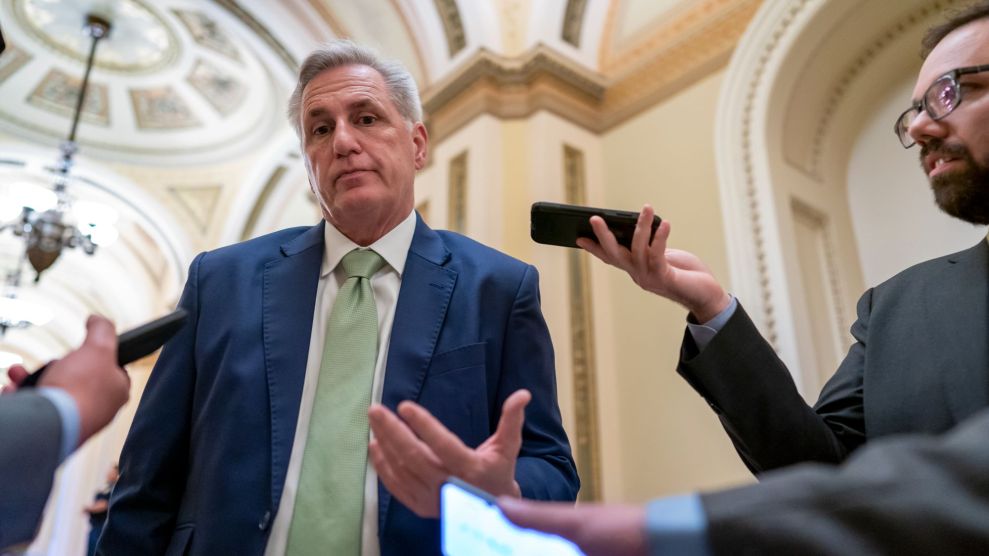 For roughly the last six years, Republican politicians have essentially been acting like the adults in that one Twilight Zone episode with the kid with godlike powers, putting on a big show about how everything Donald Trump does is “good” out of fear that he’ll cast them into the otherworldly cornfield from which there is no return. But according to New York Times reporters Jonathan Martin and Alex Burns, there was at least one brief window where top GOP officials seemed ready to stiffen their spines and prevent their leader from ever holding office again: the days following the January 6 Capitol riot.

On Thursday, the Times published an edited excerpt from Martin and Burns’s new book This Will Not Pass: Trump, Biden and the Battle for America’s Future, which claimed that Republican Party leaders Rep. Kevin McCarthy (R-Calif.) and Sen. Mitch McConnell (R-Ky.) contemplated a series of drastic measures to remove Trump from office: including invoking the 25th Amendment, pressuring him to resign, and even impeachment.

In public, McCarthy stayed true to his lily-livered persona, objecting to the election results and saying that the Democrats’ attempt to impeach Trump would “put more fuel on the fire.” He has since adopted a characteristically esoteric defense of Trump’s actions on January 6, saying that the real fault lies with Nancy Pelosi, who he (ridiculously) claims to have allowed a “security lapse” at the Capitol.

However, in private conversations, McCarthy was irate and fully willing to lay the blame squarely on Trump’s shoulders. On Jan. 8, 2021, he reportedly told House Republicans that Trump’s conduct had been “atrocious and totally wrong” and blamed him outright for inciting the mob to storm the Capitol. During a Jan. 10 meeting, he claimed that he’d ask Trump to resign from office and allegedly said that he wished that the Big Tech companies would strip some far-right lawmakers of their social media accounts.

“I’ve had it with this guy,” he reportedly ranted to a group of Republican leaders. “What he did is unacceptable. Nobody can defend that, and nobody should defend it.”

McConnell was even more direct: “The Democrats are going to take care of the son of a bitch for us,” he reportedly told two of his advisers in reference to the upcoming impeachment vote in the House.

When faced with these allegations, McCarthy dutifully denied that he’d ever said anything to blaspheme Trump orthodoxy, calling the Times’ reporting “totally false and wrong.”

But then, in an extraordinary twist, the reporters went on the Rachel Maddow Show and played an honest-to-God recording of McCarthy detailing a plan to pressure Trump to resign from office.

The comments took place during a Jan. 10 meeting with Republican lawmakers, in response to a question from Rep. Liz Cheney. In the recording, McCarthy says that he planned to call Trump and recommend that he leave office voluntarily, using the threat of impeachment as leverage.

In addition, CNN has released additional recordings of McCarthy, confirming further elements of the Times’ reporting, including one of a January 11 meeting in which the Republican leader claimed that Trump had admitted responsibility for the attack.

CNN just broadcast new audio of McCarthy unambiguously blaming Trump for the January 6 attack during a House Republican Conference call on January 11, 2021. In the audio, McCarthy also claims Trump acknowledged to him that he bears responsibility for January 6. pic.twitter.com/qH7vPdS1Qf

It’s unclear whether the revelations will have any effect on McCarthy’s likely bid to become Speaker of the House or on the Republicans’ stance toward the man they knew from the start to be at fault. Although far-right figures Steve Bannon and Rep. Matt Gaetz have criticized McCarthy for failing to show sufficient loyalty to Trump, other Republican lawmakers have attempted to downplay their leader’s about-face, casting his early condemnation as spur-of-the-moment remarks made when emotions were running high.

In addition, the Washington Post reported today that McCarthy called Trump after the audio was leaked and that the former president was, in fact, delighted by what he considers to be another sign of his continued grip on the Republican Party. According to Punchbowl News reporter Jake Sherman, McCarthy spent the morning in calls with top Republicans, reassuring them that Trump isn’t angry at him.