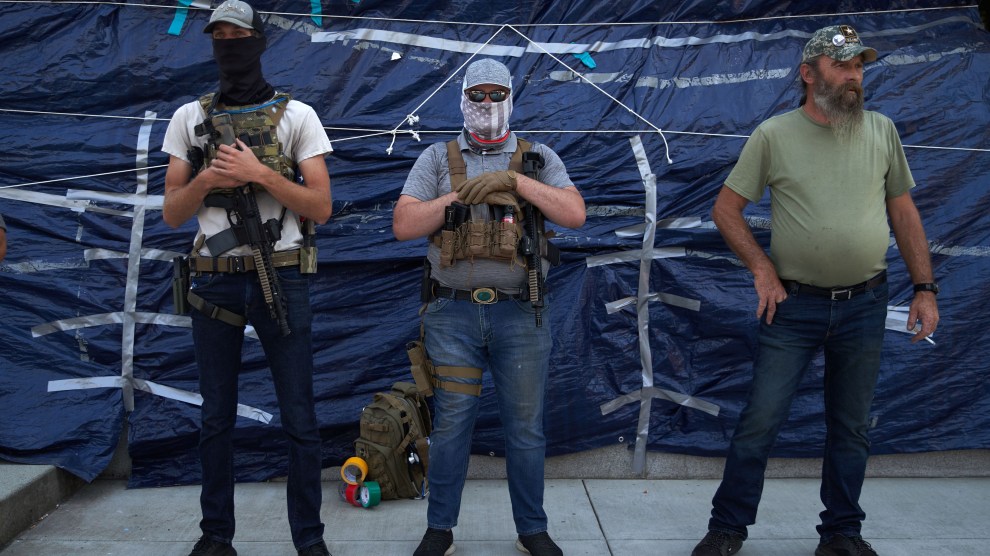 Much of the public scrutiny toward militia groups has focused on national outfits whose members were indicted for sedition, obstructing congressional proceedings, or bringing a firearm to the Capitol riot on January 6, 2021. Tech companies have accordingly tried to limit the groups’ presence on their platforms. But a new report published Friday by the Tech Transparency Project (TTP), the tech-focused wing of the nonprofit Campaign for Accountability, has dug up 435 videos showing how local militias that share the insurrectionists’ ideologies are still flourishing on YouTube.

The report finds that nearly 180 of those videos were posted in the past two years and 85 have been posted since the January 6 insurrection, when a mob of thousands stormed the Capitol in Washington, DC. During the riot, some members of the Oath Keepers and III Percenters—two national militias that claim to uphold the values of the Constitution but are viewed by many researchers as anti-government extremists—joined the attack on the Capitol with plans to try to thwart the presidential vote count through “force and violence.”

Following those events, at least 19 Oath Keepers and four III Percenters were indicted for conspiracy to obstruct an official proceeding, and the Oath Keepers’ leader, Stewart Rhodes, was charged with seditious conspiracy. So far three Oath Keepers have pleaded guilty and one III Percenter has been convicted of five counts, including bringing a firearm into the Capitol. Yet even as some members face potential jail time, sympathizers of these militias are still successfully posting content online that comes awfully close to enabling or encouraging violence.

The vast majority of the videos appear to support local and regional militia groups and chapters, which have received less attention than the national wings of the Oath Keepers and III Percenters. They don’t come across as well-resourced or as savvy as their counterparts in national militias, but over the past several years at statehouses throughout the US and at protests, these types of smaller, local militias have established themselves as intimidating presences by showing up heavily armed and outfitted like military operators in full tactical gear.

For its part, TTP believes that the presence of these videos shows that YouTube isn’t taking militia content seriously enough. They add that the video platform deserves as much scrutiny as Facebook, which has taken the brunt of blame since the Capitol riot among tech companies for allowing extremist militias to use its platforms. Though YouTube doesn’t have a militia-specific moderation policy in the way that Facebook does, the Tech Transparency Project highlights in its report that many, if not all, of the videos violate existing YouTube platform policies. “YouTube’s Community Guidelines prohibit videos that show viewers ‘how to perform activities meant to kill or maim others,’ and bans content ‘produced by violent criminal or terrorist organizations,’” the group wrote.

The videos uncovered by TTP include tactical training videos, including one where a person describes how to carry out guerrilla-style ambushes. In another video on “militia basics,” a supposed group member provides tips on weapons and gear; in other videos, the same man offer tips on “ammunition management” during combat, while praising the January 6 insurrectionists. In dozens of other videos, militia members attempt to recruit viewers to join their organizations, or offer training tips aimed at people interested in forming their own militia groups.

In several videos, militia members flaunt their training while implying that they’re willing to resort to violence. One video by a group claiming to be an iteration of the III Percenters outlines the supposed threat Islam poses to America by singling out Rep. Ilhan Omar (D-Mich.) and President Barack Obama, among others, before cutting to an ominous message: “We will be the ones to put a stop to them.” Then their video cuts to scenes of militia members running drills and shooting guns in a forest.

Though YouTube has said it prohibits so-called “borderline videos” that edge close to but don’t violate its policies on incitement to violence, hate speech, and discrimination from accruing revenue through advertisements, many of the videos unearthed by TTP still feature ads on them. Some of the ads viewed by Mother Jones direct viewers to tactical gear companies that sell plate carriers (a type of bulletproof vest) and belts for carrying guns—items that would be useful to militia members seeking to perpetrate violence. TTP also found ads from non-weapons-related advertisers who may not want their ads featured on such videos. For instance, the group found an ad for the makeup company Charlotte Tilbury on a video titled “Militia Concept: Guerrilla Warfare”; an ad for the house rental company VRBO played at the start of a III Percenters recruitment video; ads for Crypto.com and Google’s wireless service, GoogleFi, are peppered across other videos.

YouTube, for its part, believes that it is handling militia content appropriately. When asked for comment Jack Malon, a YouTube spokesperson, highlighted YouTube’s policies against promoting violence and recruitment into “violent criminal organizations” but wrote, “Our Community Guidelines include clear policies prohibiting incitement to violence, and upon review of 3 videos sent to us by Mother Jones, we determined that none violated our policies. ”

The Tech Transparency Project compiled the report because it believes YouTube’s spread of extremist militia content has not been comprehensively examined by lawmakers and researchers, director Katie Paul told Mother Jones. “YouTube has escaped scrutiny on this issue,” she said. The group discovered many of the videos on Facebook, Paul explained, which has received more public and media scrutiny for its role as a publicity and recruitment tool for militias ahead of and during the January 6 Capitol riot.

The videos highlight the inconsistency in YouTube’s moderation practices, which don’t seem to have a clear standard for deciding which videos cross a line into threats of violence and thus merit deletion or demonetization. While some of the videos hint at possible violence for the crime of being un-American or even just liberal, others are simply talking about how to prepare for a disaster in which the government collapses, or about resisting the government should it become tyrannical—a question that many Americans would not find to be controversial.

What YouTube’s moderation does not account for, though, is that the militias making these videos often have loose and wide-ranging definitions of tyranny—and thus encourage resistance of the government and violence in situations that many Americans would not consider to be true government overreach. Militia members, for example, showed up to anti-lockdown protests in 2020 to protest the legitimacy of measures to slow the spread of Covid, which was overwhelming hospitals at the time and killing record numbers of people. Despite broad public support for lockdowns at this early stage of the pandemic, these militia protesters saw them as examples of tyrannical overstepping by the government.

Lockdowns soon gave way to protests in the wake of George Floyd’s murder by police. These racial justice protests, too, irked some militias, who set up paramilitary squads that roamed the streets of some cities,  even setting up their own unsanctioned military-style checkpoints in Oregon. Just a year later, militias seemed to spot tyranny again—this time, in a presidential election win that they believed had been obtained through fraud. In response, some of their members stormed the US Capitol.

The question of how YouTube should moderate militia videos is also complicated by the fact that many militias sit in a vague territory between anti-government and white power extremism. Kathleen Belew, a historian focusing on domestic extremism at the University of Chicago, has observed that “there is no clean, dividing line between militias and white power groups.” While this doesn’t mean that every militia member subscribes to some form of white power ideology, Belew notes that white power groups are a subset of militias, and that “they share ideology, weapons, and people.”

That’s why it is no surprise that militias, some operating under Oath Keeper, III Percenter, and “Minutemen” banners, have espoused racist rhetoric and tried to enforce their own border rules. In many of the videos collected by TTP from 2020, militia members and advocates talk fearfully about that summer’s protests that highlighted police brutality against Black people.

A 2015 video titled “Arkansas Three Percent” further illustrates racist ideas held by many militias. The description below the video links to the local III Percenter group’s website, where a mission statement plastered on the homepage reads “We will not allow resettlement of refugees by any country that harbors terrorist groups such as Syria and Iraq. We will not allow the Islamic indoctrination of our children that is spreading across this nation.”

To curb content that spreads racism or extremist ideals, the next step, in TTP’s view, is scrutiny not just from other research organizations, but from policymakers as well. “YouTube tends to let its social media peers Facebook and Twitter take the heat when Washington dials of up scrutiny of Big Tech,” the report reads. “YouTube’s role in promoting extremism and unfounded conspiracy theories warrants its own examination by lawmakers and regulators.”

A previous version of this story included a quote that was incorrectly attributed to YouTube.