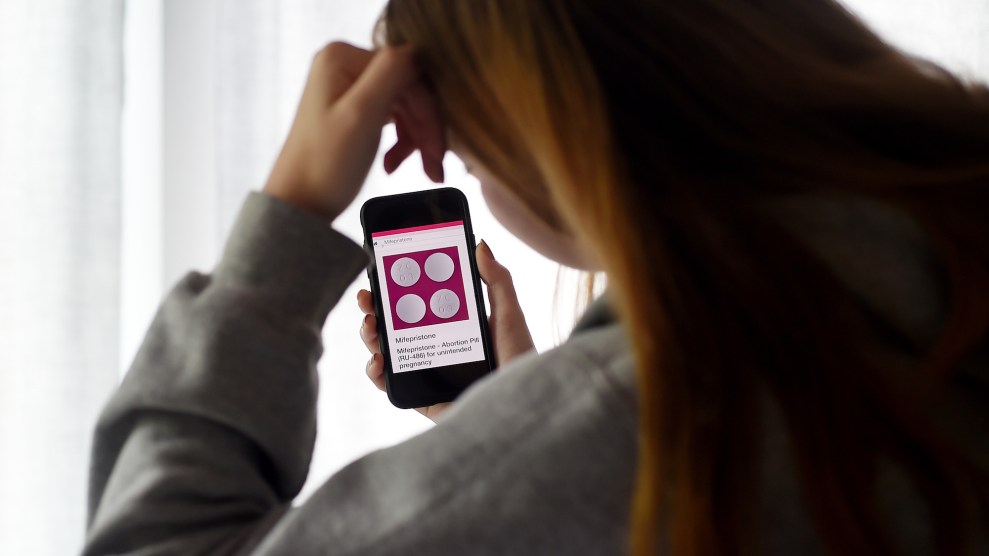 Not all the 39 patients who asked Christie Pitney for abortion pills last week were pregnant. Some had IUDs or were on birth control, and they wanted to have the pills—an extremely safe, FDA-approved regimen that is now the most common way of terminating a pregnancy in the United States—on hand, just in case. “They’re very, very worried and scared about what the future holds,” says Pitney, an advanced practice midwife who prescribes abortion pills virtually to patients.

The patients had found Pitney through Aid Access, an organization that connects people who want medication abortions with telehealth providers who can give them online consultations and order the pills for them. Those providers include people like Pitney, who works with patients in states where telehealth abortion is legal, as well as Rebecca Gomperts, an internationally based doctor who serves patients in the states where it is not. In the week after Politico posted the draft Supreme Court opinion that would overturn Roe v. Wade, traffic to the Aid Access website soared to 114,000 visitors; that week, the group’s providers ordered pills for a whopping 1,614 patients—about the same number as it served in the span of two months last year, according to data from Pitney.

A couple of years ago, only 1 in 5 people even knew about medication abortion, which is something different from the “morning-after pill,” and involves taking a progesterone-blocking medication called mifepristone followed by several doses of the anti-ulcer pill misoprostol. Pro-choice advocates are trying to address that lack of knowledge, spreading the word online about medication abortions and the existence of services like Aid Access.

It’s a crucial task as the country prepares for the fall of Roe. Even in states with abortion-hostile laws, people will seek discreet ways to end their pregnancies—and they’ll require clear information on how to do so safely. But advocates seeking to share facts about safe, self-managed abortions say they are running up against a formidable challenge: Big Tech companies taking down their posts, suspending their accounts, or deprioritizing their listings.

“In this post-Roe scenario, one of the most important things is people being able to get quality information online,” says Erin Matson, cofounder and executive director of Reproaction, a pro-choice activist group. Earlier this year, Facebook blocked Reproaction ads that contained medically accurate information about abortion pills, then restored its posts after it got press coverage. “This is really about people having safe and effective access to care, and so it’s outrageous that our content has been suppressed,” Matson says. “It’s happening to a variety of organizations across the abortion sector.”

On Tuesday, amid Aid Access’ busiest week ever, Instagram took down the organization’s account, saying that it went against the platform’s “community standards.” The group believes the trouble stemmed from a post informing people that Aid Access offered “advance provision” of the pills “just in case you need them in the future.” Another account that tried to repost their graphic found that Instagram removed it for violating guidelines on “sale of illegal or regulated goods.” (On Thursday, Instagram restored Aid Access’ account. A Meta spokesperson said it had been taken down by mistake.)

The incident was a minor blip for Aid Access, whose website gets most of its traffic from Reddit’s r/abortion forum, as well as from Plan C, an online information clearinghouse about medication abortions. Yet Plan C itself has had posts and advertisements taken down repeatedly by Instagram and Facebook, says Martha Dimitratou, the site’s social media manager. Last summer, days before a Texas law banning abortions after six weeks went into effect, Plan C’s Instagram page was suspended entirely.

In February, a Plan C Instagram post—a bright pink comic strip with basic information abortion pills’ safety and availability by mail—was removed for violating the “sale of illegal or regulated goods” guidelines, according to screenshots provided by Dimitratou. Plan C Facebook ads with phrases like “Abortion pills belong in the hands of the people who need them,” are frequently rejected for not complying with a policy on “unsafe substances,” the screenshots show.

It bears repeating that abortion pills are extremely safe, approved by the FDA, and legal to prescribe by telehealth under federal regulations. It’s only states that are politically hostile to abortion that have imposed extra restrictions, such as requiring the first pill be taken in a medical provider’s presence, effectively outlawing abortion telemedicine. Plan C ads similar to those blocked by Instagram were recently allowed to plaster the New York City subway. And in contrast, sponsored ads for hims, a telehealth company offering generic Viagra, are currently running freely across multiple Meta platforms.

Dimitratou says that since early 2021, Facebook and Instagram have barred about half the ads she’s tried to post for another reproductive health service, Women on Web, Aid Access’ counterpart for people outside the United States. Sometimes the platforms cite rules banning the “sale or use of unsafe substances”; other times they refer to a prohibition on “products, services, schemes, or offers using deceptive or misleading practices.” Screenshots show an ad with the text “Unwanted Pregnancy? We can help” was blocked for containing content that “asserts or implies personal attributes.” Sometimes, when Dimitritou appeals the blocked ads, they’re restored; often they’re not. “It’s a constant thing,” Dimitratou says. “There is a point we often reach with them where they say, ‘Well, this is how it is.'”

The difficulty in keeping posts about abortion access up on Facebook is especially ironic in light of the anti-abortion advertisements the company permits on its platform.

It’s not just Facebook and Instagram: On Twitter, Plan C can post normal tweets, but not ads, because “we are dealing with sensitive content,” according to Dimitratrou. (Twitter did not respond to a request for comment.) Meanwhile on TikTok, users have repeatedly claimed that some pro-abortion content is being banned or suppressed. “It’s happened to so many of us, honestly,” pro-choice TikTok creator Paige Alexandra told Jezebel last week, after her account was banned without any reason given. “Like, I could list people, but all I need to say is if they’ve made an abortion video, they know what I’m talking about.” (The platform does not ban the topic of abortion, or “moderate or remove content based on political sensitivities,” a spokesperson says.) Pitney, who makes TikTok videos about telehealth abortion, says her videos have been taken down for supposed “hate speech” and “bullying” before being restored. She assumes they were mass-reported by anti-choice activists, since it’s mostly her more popular posts that are affected. “My assumption is that the more people are visiting a certain post,” she says, “then more antis are also going to see it.”

Red states can pass laws that shutter abortion clinics. Big Tech can adjust its algorithms in ways that promote abortion access, or make it harder to access safe abortion resources. Just look at Google, whose search results algorithm was updated in May 2020. After the update, Women on Web’s site appeared further down in search results, producing an immediate 75 percent drop in traffic, according to Dimitratou’s data—and a sharp decline in people accessing its services.  (“Our Search ranking systems are designed to return relevant results from the most reliable sources, and on critical topics related to health matters, we place an even greater emphasis on signals of reliability,” a Google spokesperson says. “The improvements we make to Search are not targeted to benefit or penalize any one site.”)

So why are the social media giants’ content and ad policies so uneven when it comes to abortion access? A spokesperson for Meta, parent company of Facebook and Instagram, says the company doesn’t have a single policy governing abortion, and that enforcement teams can make “mistakes” when applying a range of policies to posts about the medications abortions. Meta policies do allow educational marketing about mifepristone and misoprostol, the spokesperson says, but they ban direct sales of pharmaceuticals.

The difficulty in keeping posts about abortion access up on Facebook is especially ironic in light of the anti-abortion advertisements the company permits on its platform. The company has sold up to $140,000 in space for ads about an unproven, potentially dangerous “abortion reversal” treatment, according to a report last fall from the Center for Countering Digital Hate. (A 2019 study of abortion reversal treatment was halted after a quarter of participants experienced severe hemorrhaging.) In Febraury, Rep. Jerry Nadler (D-New York) sent a letter to Meta CEO Mark Zuckerberg questioning why abortion pill reversal ads were allowed on the platform, while some medically accurate information about abortion was not. “I am concerned by recent reports that Facebook has regularly circulated anti-abortion advertisements promoting medical misinformation while simultaneously blocking medically accurate information about abortion services,” Nadler wrote. “Given the recent onslaught of abortion restrictions that state legislatures have passed or are considering across the nation, it is imperative that women have access to medically accurate information concerning abortion treatment.”

It remains to be seen whether Big Tech companies will decide to block more pro-abortion ads once Roe is overturned, and state laws criminalizing this form of reproductive healthcare are allowed to take effect. Dimitratou and others in her position are planning a meeting next month to discuss how to tackle the problem and craft specific solutions to demand of social media companies. For now, they use workarounds—writing “ab0rti0n” (with zeros) instead of “abortion,” for example, or writing in Spanish—to get their information past potential online censors. “When you have to try to do these kind of things, I think that maybe also signifies subconsciously that ‘this is not completely correct,'” Dimitratou says. “There’s a little bit of shame. Especially for younger people.”