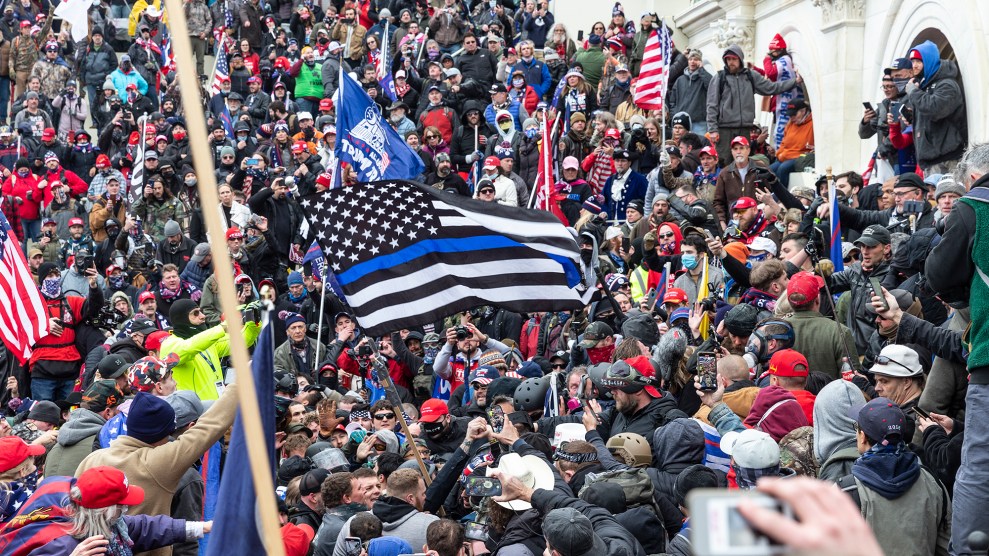 There is a lot to examine in the 10-minute video compilation of the Capitol insurrection produced by the congressional committee investigating the attack. Some of the footage, which aired during Thursday’s primetime hearing, had never been broadcast before. Other clips are now receiving fresh attention. You can watch a MAGA protester read President Donald Trump’s tweet condemning Mike Pence through a megaphone to an angry mob. You can see another clip in which the mob chants about executing the vice president. Elsewhere, the video lingers painfully as Trump supporters beat police officers attempting to stop them from entering the Capitol.

But to me, one of the most visually striking things about watching the video—and about watching the events unfold in real time last year—is the incredible assemblage of flags. There are so many flags, in more varieties than I can properly identify. There are regular American flags of course, but also: blue Trump flags, red Trump flags, American flags with Trump’s face on them, three-percenter flags, a Christian flag, Gadsden flags, a Confederate flag with an assault rifle on it, a Colorado flag, and various other niche symbols that people more familiar with the various court filings might have a better chance at deciphering.

One flag in particular stands out. It’s one of the first flags you see, and it also happens to be one you can see just about every day in one form or another: It’s the so-called Thin Blue Line flag.

The flag’s promise of power and force mattered more than the police officers themselves.

The Thin Blue Line is the unofficial (and sometimes official) emblem of American police departments. It’s a metaphor for the antagonistic way in which many cops view their jobs—as the “thin blue line” between civilization and chaos. And it’s been widely adopted by opponents of the Black Lives Matter movement and by the American right, in general.

We see it in the opening scene of the January 6 video, waving behind a woman who tells a cameraman, “I’m not allowed to say what’s going to happen today, because everyone’s just going to have to watch for themselves.”

It is a striking, though not surprising, flag to see in the context of an insurrection in which Trump supporters attacked the cops who tried to stand between them and Congress. One of the two in-person witnesses at Thursday’s hearing, Capitol police officer Caroline Edwards, described the scene that day as “carnage,” and said she was “slipping in people’s blood.”

But in another sense, the mob understood the flag’s meaning perfectly well. The symbol has never been about the idea of respecting laws in the abstract; the very idea of redesigning the American flag in such a manner and aggressively foisting it upon everyone else is a statement of dominance and control and authority. Like the Punisher logo it’s often blended together with, the Thin Blue Line flag is a rejoinder to people who question the work that cops do, laced with no small amount of malice. The right-wing political apparatus considers police officers both allies and mascots for its project. During the campaign, Trump even rallied with members the NYPD’s Police Benevolent Association at his golf course. But ultimately, actual laws and actual order were completely non-essential to his own idea of “law and order”; the flag’s promise of power and force mattered more than the police officers themselves. And on January 6, the thin blue line was just in the way.