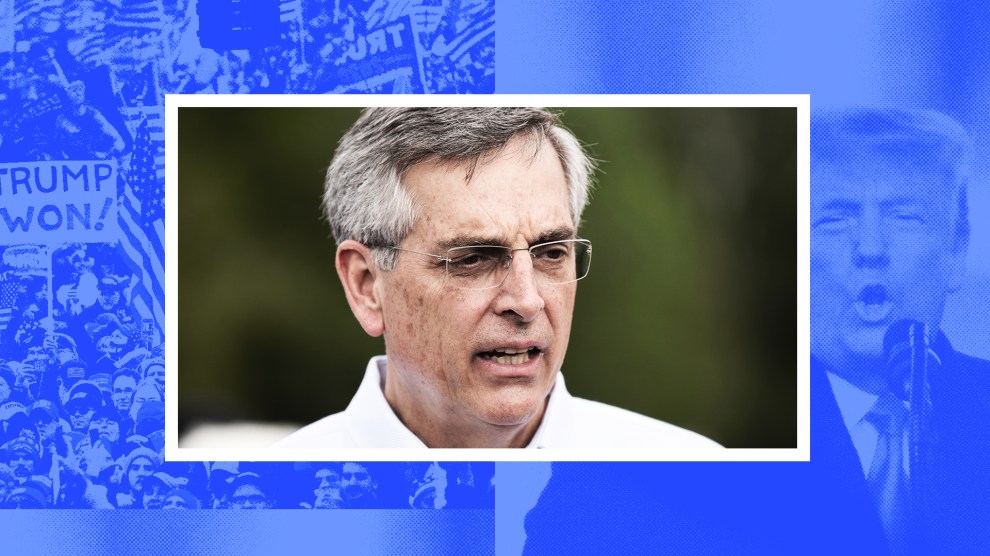 Donald Trump badgered and bullied Republican state officials, threatened them, lied to them, and lied to others about them. He had his chief of staff, Mark Meadows, and personal lawyer, Rudy Giuliani, blow up their phones trying to coerce those officials into nullifying Joe Biden’s wins in their states. When they refused, he demonized them and sic’ed his supporters on them, which led to death threats, protests at people’s homes, instances of physical intimidation and vile verbal and written attacks on them and their families. That’s according to witness testimony and other evidence presented on Tuesday by the Select Committee investigating attempts by Trump and his cronies to subvert a legitimate election.

To their credit, none of those officials—Arizona’s House Speaker Rusty Bowers, Georgia Secretary of State Brad Raffensperger and his deputy, Gabriel Sterling, and other officials from closely contested states, including Michigan, Wisconsin, Pennsylvania, Nevada—ceded to the president’s demands.

“You are asking me to do something against my oath, and I will not break my oath,” Bowers said he told Trump, during one portion of the day’s gripping testimony.

Arizona Speaker of the House Russell Bowers (R) on phone call with President Trump: "You are asking me to do something against my oath, and I will not break my oath." pic.twitter.com/2gp3dsF911

“Our institutions held,” said committee chair Bennie Thompson (D-Miss.), crediting the witnesses. But as several lawmakers pointed out, we might not get so lucky next time.

Tuesday’s hearing focused on a scheme by Trump and his advisers, most notably Giuliani, Meadows, and John Eastman, the lawyer who helped concoct the plan to push false, debunked claims of election fraud at the state level. They would assert that Biden had lost in key states where the results were close, or initially seemed close. (Biden won Michigan by 155,000 votes.) This plan may have been formulated even before the election. In a deposition clip the committee showed on Tuesday, Cleta Mitchell, one of the lawyers advising Trump after the election, said she learned of the plot “right after” or maybe “before the election.”

As vote counts showed Biden ahead in key states, Trump and his advisers first pushed state Republicans not to certify Biden as the winner. When that failed, they urged the same leaders and officials to flex their power and send to Congress slates of alternative electors who would claim Trump won their states.

When the officials rejected that too, Trump and his underlings encouraged far-right supporters to simply show up and declare themselves as alternative electors. (Republican National Committee Chairwoman Ronna McDaniel admitted in a deposition video that the RNC had “helped” with outreach for this scheme.) The idea was that these fake electors would give Vice President Mike Pence cover to refuse to certify Biden’s win, thus giving states another chance to send pro-Trump electors and throwing the election to the House—or the Supreme Court. Anything to retain power.

In one piece of fresh news, the committee revealed texts showing that Sen. Ron Johnson (R-Wis.) had sought to personally deliver fake elector slates from Michigan and Wisconsin to Pence on January 6, in an apparent effort to lend them authenticity. (An aide to Pence nixed the suggestion.) A Johnson spokesperson confirmed Tuesday that the senator had sought to take such a step, but insisted that Johnson “had no involvement in the creation of an alternate slate of electors.”

It was Trump’s criticism of Pence for failing to play along with his illegal scheme that sparked the deadly Capitol assault.

Trump pursued this strategy despite being repeatedly told that it was illegal. And Giuliani, Eastman, and Meadows helped him, despite privately admitting that it was against the law, according to last week’s committee testimony. When Pence refused to play along, Trump urged his backers to gather in Washington on January 6 to pressure the VP. Indeed, it was Trump’s criticism of Pence for failing to comply with his wishes that sparked the deadly Capitol assault, which for hours Trump refused to try to stop.

On Tuesday, Bowers, Raffensperger, and Sterling testified about the pressure they faced as Giuliani, Meadows, Eastman, and Trump himself worked to sway them. Meadows, Raffensberger confirmed, called his office 18 times to get him to take the now-infamous January 2 phone call in which Trump, for more than an hour, badgered Raffensperger to deliver Georgia to him: “I just want to find 11,780 votes, which is one more than we have,” Trump said.

Bowers described multiple calls in which Trump and Giuliani promised to produce evidence that voter fraud had allowed Biden to win Arizona. But they never did. In a meeting with Arizona lawmakers, Bowers testified, Giuliani conceded, “We’ve got lots of theories. We just don’t have the evidence.”

Bowers said he repeatedly turned Trump down, since what the president was asking violated his oath to uphold the constitutions of Arizona and the United States. “It is a tenant of my faith the Constitution is divinely inspired,” he said.

Because he didn’t do what Trump wanted, Bowers said, he got thousands of calls and texts. Right-wing protesters showed up at his home, where he lives with his wife and daughter, who Bowers, choking up, described as “gravely ill.” Trump’s backers had “video panel trucks with video of me, proclaiming me to be a pedophile and a pervert and a corrupt politician,” Bowers said. An armed extremist also threatened one of neighbors, he said.

Raffensperger testified that his email and phone numbers were made public, and he got texts from all over the country. His wife was targeted with “sexualized attacks,” and someone broke into the home of his late son’s widow, he said.

The committee also heard from Shaye Moss, a Fulton County, Georgia, elections worker, who was personally targeted by both Trump and Giuliani. According to their false—and racist—claims, Moss and her mother, Ruby Freeman, had orchestrated a scheme to steal votes for Biden. Giuliani claimed an election night video showed Freeman, Moss, and another election worker “surreptitiously passing around USB ports” like “vials of heroin or cocaine.” In reality, Freeman had handed her “a ginger mint,” Moss testified.

Here's the clip. “Passing around USB ports like they were vials of heroin or cocaine.” pic.twitter.com/9xN6aexjlJ

As a result of Trump and Giuliani’s public attacks, Moss said, she, her mother, and even her grandmother faced death threats and racist attacks. “Be glad it’s 2020 and not 1920,” she said, summarizing one message—a not-so-subtle reference to lynching.

Trump encouraged the threats. He attacked Freeman by name during his call with Raffensperger. On December 15, he also retweeted a post in which Lin Wood, a prominent far-right lawyer, said Raffensperger and Georgia governor Brian Kemp would “soon be going to jail.” (Weeks earlier Steve Bannon had arranged for Wood’s nonprofit to receive $100,000 for fugitive Chinese mogul, Guo Wengui, to support Trump’s efforts to steal the election, Mother Jones has reported.)

Kemp and Raffensperger refused to embrace Trump’s election-fraud lies. But they later appeased his fans by backing a bill aggressively restricting voting rights in Georgia. That’s part of a trend. Around the country, GOP lawmakers are not only making it harder to vote, they are stripping power from independent local election authorities and giving legislators more power to control whom state electors support.

Meanwhile, most Republican lawmakers, unlike the officials who testified Tuesday, have been cowed by Trump into embracing or at least tolerating his lies. The Washington Post reported last week that more than 1,000 GOP candidates around the country have questioned Biden’s victory, backed efforts to challenge it, or downplayed the significance of January 6.

Others, like House Speaker Kevin McCarthy (R-Calif.) are working to undermine the committee and change the subject. McCarthy has indicated he will eliminate the panel if the Republicans take over the House this fall.

Trump is still actively trying to demonize and ruin officials who dared to defy him. On Tuesday, he issued a statement calling Arizona Speaker Bowers a “RINO” and claiming Bowers had agreed with his election-fraud claims in 2020. This was a lie, Bowers insisted. And though Trump failed badly in his efforts to oust Kemp and Raffensperger in this month’s elections, he may fare better against Rep. Liz Cheney (R-Wyo.), the committee’s outspoken vice chair. Cheney trails in polls to a primary challenger. Because she challenged Trump’s lies, she looks likely to lose her seat.

The groundwork Trump and his minions have laid in various states since 2020 raises the likelihood that the next coup attempt, by him or someone else, could succeed. “The system held, but barely,” Rep. Adam Schiff (D-Calif.) said on Tuesday. “And the questions remains, will it hold again?”