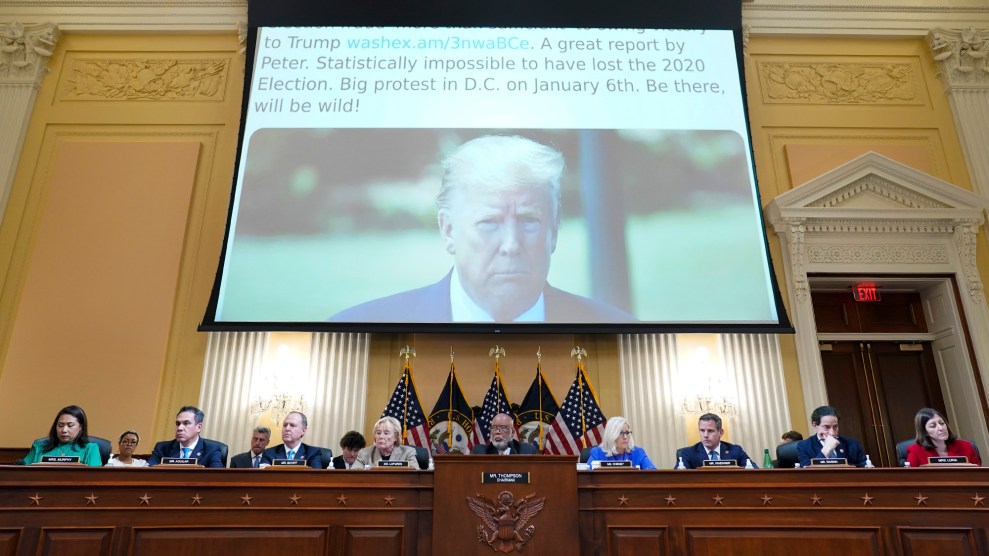 An image of a tweet by former President Donald Trump is displayed at the House select committee hearing investigating the Jan. 6 attack on the U.S. Capitol.Andrew Harnik/AP

A democracy is only as strong as its ability to recognize what threatens it. If a nation cannot comprehend the danger it faces, it is not in a position to adopt measures to protect itself. On Thursday night—in prime time!—the House committee investigating the January 6 riot tried to sound the alarm. But the fact that the committee needed to highlight the obvious—that the constitutional order was jeopardized by a president who schemed to overturn a free and fair election and who incited an insurrectionist attack on the US government—was itself a warning that this threat has not been fully or adequately addressed.

Opening the first of a series of hearings, Rep. Bennie Thompson (D-Miss.), the committee chair, delivered passionate remarks that noted the assault on the US Capitol placed two centuries of constitutional democracy at risk and that it was part of “sprawling, multi-step conspiracy” orchestrated by Donald Trump to negate the election and overthrow the government to retain power illegally. Thompson asked his audience to try not to view this hearing as a political endeavor. The committee, he said, “will remind you of the reality that happened that day.” And that is the committee’s challenge: to counter Trump’s Big Lie and defend not just constitutional government but reality itself.

Thompson did that with the first piece of evidence the committee presented. It was a clip from a deposition of former Attorney General Bill Barr, who told the committee’s investigators that he had three post-election conversations with Trump in which he said the election was not stolen and that this assertion was “bullshit.” In her opening statement, Rep. Liz Cheney (R-Wyo.), the ranking Republican on the committee, showed testimony from Ivanka Trump in which she said she had accepted Barr’s conclusion that there was no significant election fraud. That is, according to the president’s daughter, Trump was defying reality—either lying about the election or delusional, perhaps both.

Cheney hammered this point further: Assorted Trump campaign officials, she said, concluded there was no evidence the election was stolen. A top campaign lawyer informed White House chief of staff Mark Meadows that the campaign had uncovered no significant voting wrongdoing. Meadows replied to him, “So there’s no there there.” (My recollection is that this conversation is not in Meadows’ recent book.) Barr also told Trump that the allegations that voting machines had been rigged against him was “complete nonsense” and “crazy stuff.” Yet that didn’t stop Trump. He kept repeating this accusation. He refused to acknowledge reality.

Cheney also signaled the committee is determined to show that Trump engaged in a profound dereliction of duty on January 6.  She noted that half a dozen witnesses have told the committee that while the violent melee was under way aides and confidantes pressed Trump to take steps to end the riot—and he refused to do so. Worse, he became angry at advisers who asked him to intervene. Cheney also disclosed that in response to reports that the marauders were threatening to kill Vice President Mike Pence, Trump, according to one witness, said maybe Pence “deserves it.” And she said that during the course of the riot, Trump placed no call to any element of the US government to protect the Capitol.

This was powerful stuff. The committee showed much savvy in how it structured the opening hearing. It teased important revelations to come. Cheney described what’s coming up in the five subsequent hearings the committee has scheduled, including detailed examinations of Trump’s various plots to undermine the election (pressuring state election officials and legislators, pushing the Justice Department to declare the results fraudulent, muscling Pence, and more) and the link between these schemes and the assault on Congress. During the opening presentation, the committee showed disturbing and graphic video of the violence of January 6—including new footage. The panel’s nine members sat stone-faced on the dais, as the images played. Journalists in the room watched in horror, shaking their heads, even though they had seen such video previously. Caroline Edwards, a Capitol Hill police officer on the front lines of the battle that day, provided visceral testimony: “I was slipping in people’s blood… It was carnage. It was chaos… It was hours of hand-to-hand combat.”

Much coverage of the January 6 committee and its hearings has up to now focused on the political implications: Will this help the Democrats for the coming midterm elections? Such framing is a disservice, as it turns this singular event into merely another point of made-for-cable-TV conflict. The Republicans have tried mightily to cast the 1/6 riot as just another partisan matter in the never-ending scuffle between Ds and Rs. This has become their go-to tactic when defending the sins of Donald Trump and the excesses of Trumpism. The Russian attack on the 2016 election and the Trump crew aiding and abetting this assault on American democracy? Just a partisan witch hunt. Trump’s effort to pressure a foreign leader to generate dirt on a political rival? More Democratic caterwauling. And the seditious January 6 raid? Though GOP leaders in its initial aftermath expressed shock and blamed Trump—Senate minority leader Mitch McConnell told colleagues Trump’s conduct was impeachable, and House minority leader Kevin McCarthy castigated Trump publicly—the Republicans reverted to their default position on Trump wrongdoing: no big deal.

Hours before the hearing began, the National Republican Senatorial Committee sent out a fundraising email that referred to the committee’s work as “the radical Democrats’ political persecution of Americans” and claimed the committee was “planning to openly attack anyone that supported Pres. Trump.” It compared the committee to “Communist and Authoritarian countries like China and Russia [that] PROSECUTE their political opponents.” The “bogus” hearing, it asserted, was a “sham” and “patriotic Americans” had to step up to “end this madness.”

Before the hearing began, Rep. Jackie Speier (D-Calif.), who was one of a dozen or so House Democrats who were in the audience, tried to decouple the committee’s work from the regular and never-ending political rigamarole. “This oversight function of the House is not tied to the issue of the day; it is tied to the Constitution… It’s the most fundamental form of oversight: Does the Constitution have enough protection in it to prevent the overthrow of the government?” But a discussion of that depends on the acceptance of the basic fact that January 6 posed a threat and presented a problem. Many Americans do not believe that. A Morning Consult poll this week found that 53 percent of Republicans would vote for Trump in the 2024 GOP primary contest.

The committee did a good job of defending the Constitution this evening. But it remains to be seen what it can do to beat back Trump’s war on reality.