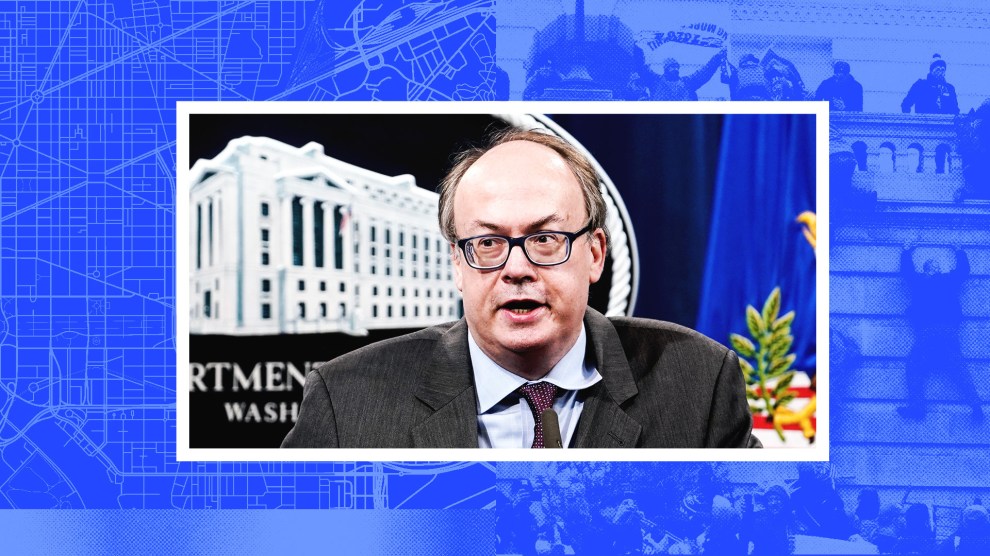 It was an odd coincidence of history: On Thursday, the 50th anniversary of the “Smoking Gun” conversation that forced Richard Nixon to resign his presidency, the House select committee investigating the January 6 riot held a hearing on Donald Trump’s effort to enlist the Justice Department in a corrupt bid to overturn the 2020 election.

Thursday’s hearing told the alarming tale of how Trump leaned on DOJ officials to affirm his false allegations of fraud and baseless conspiracy theories, and tried to corrupt the department by installing as acting attorney general Jeffrey Clark, a lackey loyal to Trump’s Big Lie crusade, who was prepared to declare the election tainted and to ask legislators in swing states Joe Biden had won to nullify the results. Testimony showed that Trump came close to triggering a full-scale constitutional crisis, which was thwarted only because a few senior department officials stood up to him.

The secretly recorded tape of that damning Nixon discussion revealed that the president had directly ordered the attempted cover-up of the Watergate break-in and had obstructed justice. But the specific plan—to have the CIA tell the FBI to cease its investigation—was cooked up by John Mitchell, the attorney general. Nixon’s Justice Department was obstructing itself.

It was the Justice Department’s deep involvement in the Watergate scandal that led to the creation of rules to protect the department from political interference from the White House—which was precisely what occurred with Trump. “We were only a half-step away from a full blown constitutional crisis as President Donald Trump and his loyalists threatened a wholesale takeover of the Department of Justice,” the Senate Judiciary Committee, which investigated the matter, noted in an extensive report last October.

The attempted subversion took place in December 2020, after then-Attorney General Bill Barr, up to that point a Trump sycophant, resigned in disgust when his boss refused to accept the election results. Trump then tried to pressure Jeff Rosen, the acting AG, to declare the election fraudulent.

According to notes taken by Richard Donoghue, Rosen’s deputy, Trump at one point told Rosen to “just say the election was corrupt and leave the rest to me and the Republican congressmen.” This referred to Reps. Jim Jordan, Scott Perry, Marjorie Taylor Greene, and others who were colluding with the White House to stop the certification of Biden’s win. When Rosen refused, Trump threatened to replace him with Clark, a DOJ subordinate who eagerly wanted the department to claim there was evidence of widespread election fraud so states could replace Biden electors with Trump electors.

At one point, Trump told Rosen to “just say the election was corrupt and leave the rest to me and the Republican congressmen.”

As the Judiciary Committee pointed out, the White House’s communications with DOJ in this matter violated the post-Watergate restrictions governing interactions between 1600 Pennsylvania Avenue and the department. In fact, Trump’s skullduggery wins the contest for most outlandish attempt to politicize the Justice Department. (It takes some doing to one-up Nixon in that regard.)

On Thursday, Rosen and Donoghue provided dramatic testimony chronicling their conversations and meetings with Trump, who was constantly haranguing them and was upset that the Justice Department wouldn’t confirm the debunked allegations and batty conspiracy theories he and his allies were hawking. The officials repeatedly informed Trump that the department had investigated the claims and found them inaccurate and that they had no business meddling in the election. It was like telling a mob boss he couldn’t get his way. Trump would not accept that.

A key point of the hearing focused on Clark pressing Rosen and Donoghue to send a letter to Georgia and other states stating that the election was tarred by fraud, and thus state lawmakers should select new slates of electors—presumably Trump supporters. Rosen and Donoghue each believed forwarding this letter would be disastrous for the department and the nation, and told Trump as much. But neither he nor Clark would relent.

The testimony demonstrated just how desperate and crazy Trump and his crew had become, and the extent of their schemes to to prevent the legitimate transfer of power. White House chief of staff Mark Meadows even encouraged Rosen and Donoghue to investigate the ludicrous conspiracy theory that hackers (apparently connected to the CIA and MI6) had used an Italian satellite to switch Trump votes to Biden. The DOJ declined, but the White House managed to have acting Defense Secretary Chris Miller instruct the defense attaché in Rome to look into this bunk.

The Clark story is especially nutty. An environmental lawyer who was the acting head of the DOJ’s civil division, he had no experience whatsoever in criminal investigations, let alone election fraud. Yet Rep. Perry (R-Penn.) had introduced him to Trump, who immediately latched on to Clark as a toady who would corrupt the department to help him stay in power.

According to Thursday’s testimony, Clark’s attempts to pressure Rosen and Donoghue were assisted by Ken Klukowski, a young, conservative lawyer the department had hired in mid-December. The big reveal: Klukowski also was working with John Eastman, the conservative attorney behind Trump’s strategy to block the certification of electoral votes. This disclosure raised the possibility that someone had planted Klukowski in the Justice Department to help Trump steal the election.

Trump’s moves to pervert the DOJ culminated in a Oval Office meeting on January 3, in which he castigated Rosen for not producing evidence to back up the allegations of fraud. At that meeting, Trump expressed his desire to replace Rosen with the inexperienced Clark, who would willingly send those letters to the states. White House records, in fact, were already identifying Clark as acting attorney general, as if it were a done deal.

The coup was almost in place. Trump backed off only after the DOJ brass told him a Clark-for-Rosen switch would prompt mass resignations. During the hearing, Donoghue recalled that his fellow witness, former Assistant Attorney General Steven Engel, had warned Trump that “Jeff Clark would be left leading a graveyard,” and that Engel’s comment “clearly had an impact on the president.” Once again, a thin line of sticking-to-the-rules Republican officials had blocked Trump from an unprecedented abuse of power.

The hearing also revealed that some of the Republican House members plotting with the White House to overturn the election sought pardons from Trump after January 6. These included Reps. Matt Gaetz, Mo Brooks, Andy Biggs, Louie Gohmert, and Perry. There was also testimony suggesting that Greene may have contacted the White House counsel’s office to request a pardon, and that Jim Jordan had inquired about pardons for House Republicans.

Trump’s attempts to muscle DOJ officials into baselessly declaring the election fraudulent could place him in legal jeopardy. As a recent Brookings Institution report noted, this scheme may have violated one or more provisions of the federal law prohibiting conspiracy to defraud the United States or “any agency thereof.” The report also said that Trump and others in his last-days inner circle, notably Eastman, might have violated another part of the criminal code that forbids corruptly obstructing or impeding—or attempting to obstruct or impede—an official proceeding, such as the certification of electoral votes.

This week, federal agents raided Clark’s home, and the Justice Department served subpoenas on several Republicans who were involved in state-level efforts to thwart the certification of Biden’s victory. The raid and the subpoenas are signs that Merrick Garland’s Justice Department is actively investigating plots Trump and his allies instigated to overturn the election.

Thursday’s proceedings depicted an attempt to subvert the Justice Department that even Nixon could never have dreamed of. And that’s only one piece of the January 6 story. The committee has again demonstrated how Trump’s war on democracy nearly succeeded, with more hearings yet to come.