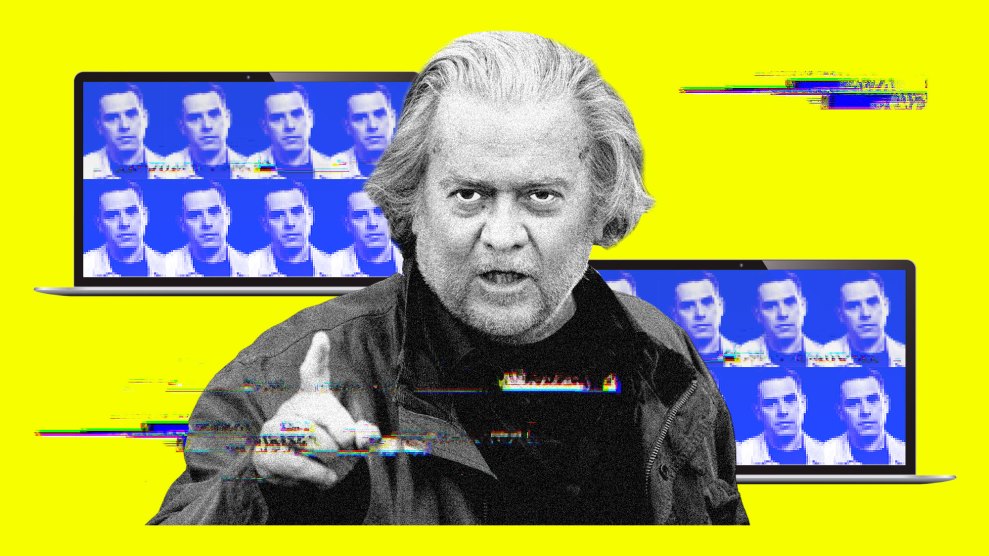 Steve Bannon’s machinations around the 2020 presidential race were, at least according to his own words, sleazier and more cynical than even some of his harshest critics might have guessed. In leaked audio previously revealed by Mother Jones, the former Trump White House strategist said shortly before the 2020 election that Trump intended to declare victory on election night even if he was losing—part of a preexisting plan, Bannon made clear, to falsely assert that any Trump defeat was due to fraud.

But that wasn’t all. Bannon also boasted on the recording about his efforts to help position Trump for his big election-fraud lie. Aiming to hurt Joe Biden’s chances and at least narrow the election results, Bannon ensured that sexually explicit material from Hunter Biden’s laptop was widely publicized. For that, he enlisted help from his patron, exiled Chinese mogul Guo Wengui. Bannon also expressed approval of lies by Guo and his associates about what that material actually showed, referring to their false accusations that Hunter Biden committed salacious crimes as “editorial creativity.”

The audio comes from an October 31, 2020, meeting between Bannon and supporters of Guo, who controls pro-Trump, Chinese-language media sites and nonprofits that spread various forms of far-right disinformation.

“We got you all this stuff and you started dumping it out and the internet started picking it up,” Bannon said to people at the gathering, some of whom can be heard laughing during parts of the discussion. “The hard drive from hell stopped [Biden’s] momentum and drove up his negatives,” he said at another point.

A Bannon spokesperson and an attorney for Guo did not respond to requests for comment.

At Thursday’s hearing of the House select committee investigating January 6, the last of eight hearings the panel held this summer, Republican Rep. Liz Cheney highlighted the leaked audio uncovered by Mother Jones as fresh evidence of Trump’s plan to overthrow the election. The audio shows that “Donald’s Trump plan to falsely claim victory in 2020, no matter what the facts actually were, was premeditated,” Cheney said. “Perhaps worse, Donald Trump believed he could convince his voters to buy it, whether he had any actual evidence of fraud or not.”

About a week before the meeting with Bannon in late October 2020, Guo’s associates had begun posting videos and pictures of Hunter Biden engaged in sexual encounters and using drugs on GTV, a since shuttered video-streaming site run by Guo. In leaked messages previously uncovered by Mother Jones, Guo directed subordinates in detail on how to post and distribute material from Biden’s laptop. He further instructed them to spread false claims about the material: First, he told them to say the files included images of Hunter Biden with underage Chinese girls. There is no evidence at all supporting this allegation. Second, Guo told subordinates to claim that the Chinese government had obtained the material and used it to blackmail Hunter and his father, Joe Biden. That, too, was a lie, people involved in publishing the material told me.

Bannon’s role in this effort was never in much doubt. When the New York Post began reporting in mid-October 2020 on other material from Hunter Biden’s laptop, the tabloid explained that its journalists had learned of the hard drive from Bannon and had later received a copy of it from Rudy Giuliani. A computer shop owner in Delaware said he had given a copy of the hard drive to Giuliani.

“It’s your job to get out all the sex pictures.”

In the leaked audio, however, Bannon explicitly acknowledged his role in making sure that Guo and his colleagues obtained and published explicit material from the laptop. “We got the hard drive and got it to you,” Bannon reiterated to the Guo associates at the meeting.

Bannon has worked with Guo since shortly after Bannon’s ouster from the White House in 2017. Guo paid Bannon at least $1 million to help launch his media companies, and Bannon later worked as a director of GTV.

The task of actually sharing the hard drive files with Guo’s associates went to two men who worked with Bannon on his War Room podcast, Jack Maxey and Vish Burra. Maxey, who became a kind of professional promoter of material from the laptop—he reportedly refers to himself as “Hunter’s laptop king”—described his involvement in providing the laptop material to Guo in March, during an online broadcast called “Real Talk With Mary Grace.” Maxey said that claims that the hard drive contained sexually explicit images of children were fabricated. Maxey called Guo “a very bad actor” and said Guo’s media company “took those images and injected images that were not in there and played a game.”

Maxey told Mother Jones in an interview that he felt that Guo and his associates’ promotion of false claims about Hunter Biden had distracted from real information on the laptop related to Hunter’s foreign business dealings while his father was vice president.

Burra, who left Bannon’s War Room in late 2020, told Mother Jones that Bannon had instructed him, “It’s your job to get out all the sex pictures.” Burra said that with Bannon’s encouragement, he eventually shared the material with a Guo assistant via files with titles including “Salacious Pics Package.”

A Guo ally falsely asserted in a broadcast that the material included videos showing “sexual abuse of young children.” Those claims were repeated by Rudy Giuliani, and after the election by Tucker Carlson.

The group Bannon spoke to on October 31, 2020, included Wang Dinggang—who at the time was a Guo ally with a YouTube channel called Lude Media that was featured on GTV. (Wang also uses the name “Lude.”) In a September 24 broadcast of that program, Wang falsely claimed that Chinese sources had sent US officials “three hard disks” of material related to Hunter Biden. In fact, the material came from the hard drive Giuliani obtained, not from China. That broadcast—which appeared three weeks before the initial New York Post story—was the first public indication that Trump allies had obtained Hunter Biden’s private files. In that video and subsequent rants, Wang falsely asserted that the material included videos showing sexual abuse of children. Those claims were repeated on another Guo site, GNews; by other right-wing publications and figures; by Giuliani; and after the election by Fox News host Tucker Carlson.

In response to an inquiry about Wang’s media activity, which is publicly available and detailed in previous reporting from Mother Jones, Wang said, “Nothing you say about me is true.”

During the October 2020 meeting, Bannon himself cited Wang’s role in distributing the material. Bannon specifically said that through “Lude’s editorial creativity over the pictures,” as well as claims about “the CCP involvement” in Hunter’s business activities, “we drove up Biden’s negatives.”

“We hammered this guy every day for 10 days with the worst pictures in the world,” Bannon boasted.

Bannon didn’t just credit the false claims about Hunter Biden with improving Trump’s position in the polls. He also asserted that efforts by Twitter and Facebook to suppress reporting by the New York Post and others on the material from the laptop had only heightened interest in it. And he explained that the Biden campaign had erred by failing to respond to the smear campaign that Guo’s associates had ignited.

“We hammered this guy every day for 10 days with the worst pictures in the world, drug addict, taking money from CCP,” Bannon said. “No response. Nothing. And the negatives just keep going up.”

“Nobody came out and said anything you’re saying’s not true,” he added. “Even the wildest allegations.”

“That’s why when people tell me, ‘Lude’s stuff’s getting crazy,’ I go, ‘Not crazy enough,'” Bannon said, drawing laughter from others in the meeting.

Bannon then went a step further: He told Guo’s associates that the lies they generated had allowed Trump to pull close enough that Biden had little chance of scoring a blowout victory. That would help Trump deploy his “strategy” of alleging fraud and declaring victory on election night, even if he was trailing or the race was too close to call. The lies about Hunter Biden, that is, would help Trump lie about the election.

Perhaps most disturbing in hindsight is what Bannon concluded after that. This strategy, he added, would likely result in political violence. “So my point is,” he said, “any peaceful resolution of this [election] is probably gone.”

Part One of our exclusive series reveals Bannon secretly bragging about Trump’s plans to falsely claim victory, before the 2020 election. Watch: