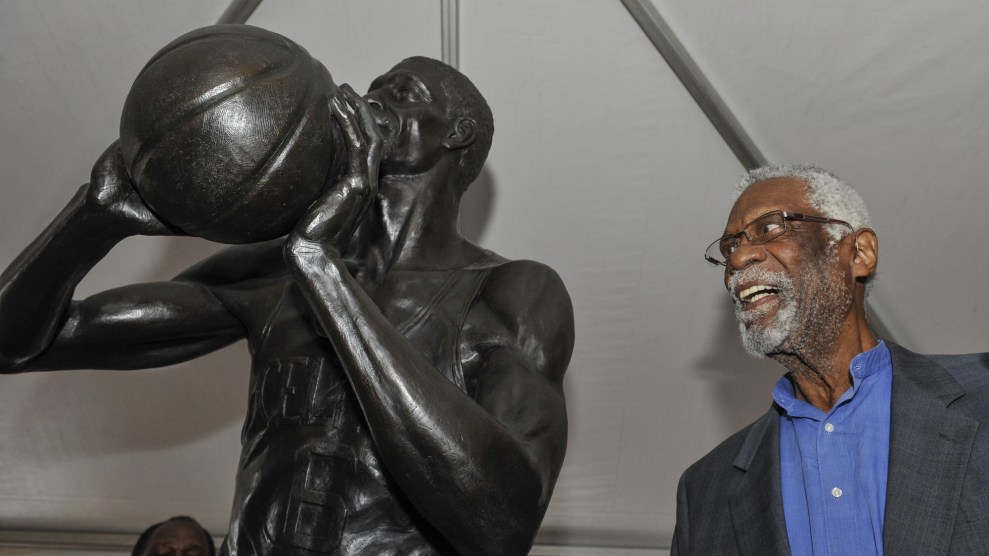 When I think of Boston Celtics legend Bill Russell, who died on Sunday at the age of 88, one of the first things that always comes to mind is a quote from one of his former teammates, the late Tommy Heinsohn, in an interview with Sports Illustrated in 1999.

“Look, all I know is, the guy won two NCAA championships, 50-some college games in a row, the Olympics, then he came to Boston and won 11 championships in 13 years, and they named a fucking tunnel after Ted Williams.”

Russell was the greatest player on the most dominant team in the history of American professional sports. He won so many championships as a player and as a hybrid player-coach—when he was named Celtics head coach in 1966 he became the first Black head coach in NBA history—that he ran out of fingers to put his rings on. As a Celtics fan born several decades after he last anchored a defense, his legacy has always hovered over everything else in a spiritual and literal sort of way—the man was responsible, after all, for the majority of the championship banners you see hanging from the rafters of TD Garden; he raised eight more of them than Larry Bird.

But as Heinsohn observed, Russell wasn’t always treated like Boston’s famous white stars of yore. His relationship with the city is often described as “complicated.” Now there’s a euphemism. Refusing to sign autographs because you think true fans would rather have a conversation—that’s “complicated.” The shit that fans lodged at Russell was literal shit. In an article for the New York Times in 1987, his daughter, Karen, described frequent break-ins at the family’s home outside Boston, with vandals writing the N-word on walls:

The burglars had poured beer on the pool table and ripped up the felt. They had broken into my father’s trophy case and smashed most of the trophies. I was petrified and shocked at the mess; everyone was very upset. The police came, and after a while, they left. It was then that my parents pulled back their bedcovers to discover that the burglars had defecated in their bed.

Every time the Celtics went out on the road, vandals would come and tip over our garbage cans. My father went to the police station to complain. The police told him that raccoons were responsible, so he asked where he could apply for a gun permit. The raccoons never came back.

Of course he harbored some resentment over the years. But what made Russell vilified was part of what him such a titanic figure inside and outside the sport—he was not just a revolutionary defender around the rim and a historic winner, but an outspoken activist who stood up for himself and never stopped encouraging others fighting for their rights.

Russell was at the March on Washington to hear Martin Luther King Jr.’s “I have a dream” speech. He backed Muhammad Ali when the heavyweight fighter was stripped of his Olympic medal for refusing to fight in Vietnam. He boycotted a game in Kentucky in 1961 after two Black teammates were refused service at a hotel.

Russell stood up for what mattered to him, and he stayed that way to the end. When, inspired by the blacklisted QB Colin Kaepernick, NFL players began kneeling during the national anthem before games in 2017, Russell posted a photo of himself, wearing his Presidential Medal of Freedom, kneeling in solidarity. Russell was old, and very tall of course, and hadn’t really tweeted much before, and those things all added up to an extra bit of poignancy from one of the realest ones to ever do it:

Afterwards, Russell told ESPN’s Jackie McMullan that when he was criticized for his advocacy during his playing career, he would pick out a particular record and listen to it.

“There’s an old song I love called ‘You Never Walk Alone,”’ he told her. “The words I always remembered best from that were: ‘When you walk through a storm, hold your head up high, and don’t be afraid of the dark.”’