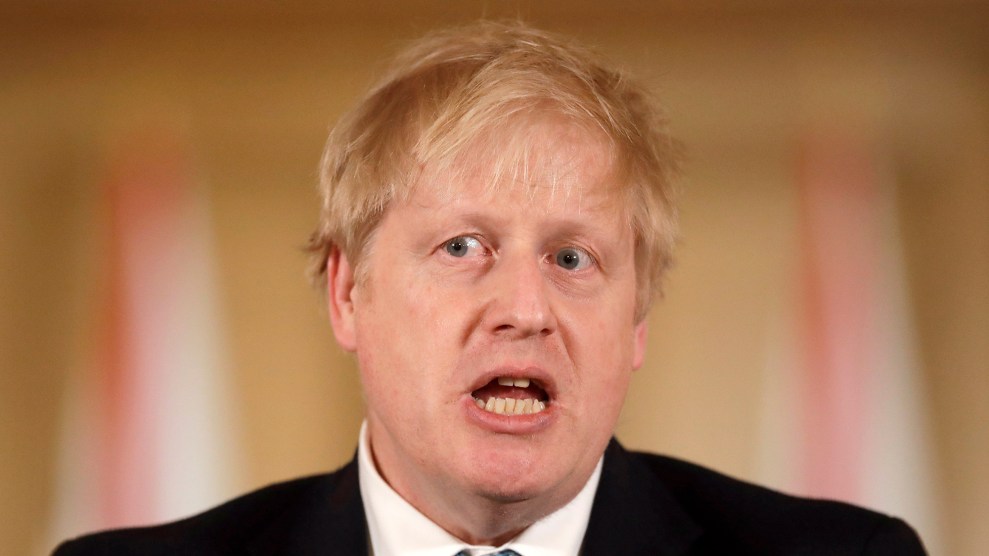 The Trump-BoJo comparisons were always fun but ultimately a bit facile. The cartoonish hair. The buffoonish act. The lying. The shameless pursuit of self-promotion at any cost. Both were labeled “populists” who ruthlessly ruled their parties. But history will show that today’s the day these easy similarities ended: Boris Johnson, amid dozens of resignations and endless scandal, announced that he would step down as Britain’s prime minister. Meanwhile, Donald Trump is still the frontrunner for the 2024 Republican nomination.

Sure, BoJo had remained defiant and issued Trumpian threats to fight through the storm. “Frankly, the job of a prime minister in difficult circumstances when you have been handed a colossal mandate is to keep going, and that’s what I’m going to do,” he said, only yesterday, as a stream of once-loyal, big-name officials abandoned him. “Boris Johnson is the condemned man who refuses to die,” one Bloomberg columnist declared. But a single sleep later, that writing on the wall became a flashing neon sign: “This is the end.”

Before the breakfast shows on television were over, there were 53 resignations, including four Cabinet ministers in just two days. Many of the letters included brutal assessments of Johnson’s tenure and critiques of his honesty. Some pleaded with him to go.

Just hours later, he stepped down as leader of his Conservative party but vowed to stay prime minister until a new leader is selected. Now, the bloody battle begins for his replacement, which could take weeks fueled by plenty more intrigue. But pressure is already mounting for him to relinquish all power and GTFO.

BoJo seemed to embrace the brutality and inevitability of politics at his press conference today: “Them’s the breaks,” he said, a phrase I’ve since learned might have derived from billiards: You must accept where the balls end up after the first shot smashes the pack open. “And my friends, in politics, no one is remotely indispensable,” he said. That’s how the cookie crumbles, basically.

Could you imagine those words coming out of Trump’s mouth?

BoJo’s media savvy—and danger—has always been about his ability to diagnose political reality and then ruthlessly spin it or lie about it. Trump, on the other hand, denied reality outright by constructing a terrifying new alternative: After suffering a humiliating defeat, Trump launched a multi-pronged coup attempt, seemed to enjoy watching a gang hunt his deputy to hang him, suffered numerous cabinet defections, an impeachment, and more, and yet still rules his groveling party in absentia from a seaside palace.

BoJo’s fall was dramatic but strikingly traditional by comparison: a rise, a scandal, accusations of a cover-up, another scandal, a first (failed) no-confidence vote, and ultimately, simple math: You can’t endure this many cabinet defections and have enough loyalists to stuff into top jobs—many simply remain open. As Labor leader Kier Starmer gleefully parried in a heated parliamentary debate yesterday: “Isn’t this the first recorded case of the sinking ships fleeing the rats?”

As it turns out, when it wants to, a party really can stand up to its leader.