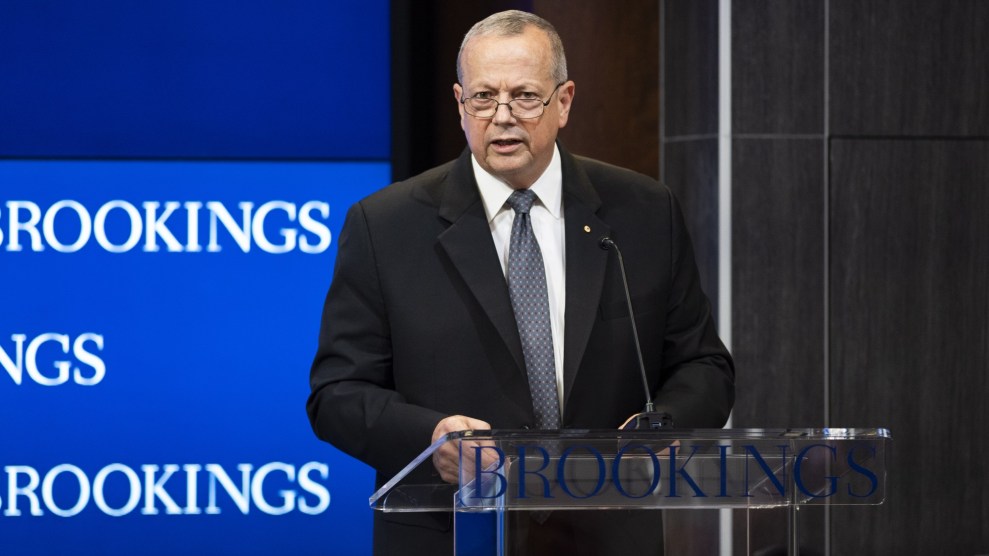 Sen. Elizabeth Warren is taking aim at the Brooking Institution, a bastion of Washington’s Democratic establishment. In a letter Friday, the Massachusetts firebrand drew a direct line between extensive donations to Brookings from the country of Qatar and a federal investigation into whether the think tank’s ousted former president, retired General John Allen, engaged in illegal, secret lobbying on behalf of the Gulf state.

“I am writing to request information about how the former President of the Brookings Institution, who was at the time a Brookings distinguished fellow, was allowed to engage in potentially illegal lobbying activities, and about how the think tank will ensure that, in the future, its officials and leaders are not involved in illegal or inappropriate lobbying,” Warren wrote.

“Brookings has a troubling pattern of receiving contributions from foreign governments and private sector companies with a stake in their work.”

Warren’s letter is a notable attack by a prominent Democrat on a renowned, center-left institution. It is part of the continued criticism Brookings has faced for allegedly allowing big donors to influence its policy work, and in particular for its relationship with Qatar.

“Brookings has a troubling pattern of receiving contributions from foreign governments and private sector companies with a stake in their work,” Warren said in a statement to Mother Jones. “That creates a conflict of interest and concerns about influence-peddling.”

A Brookings spokesperson said in an email Thursday that the think tank “will respond to Senator Warren’s inquiry to assure her of the institution’s full commitment to independence and integrity in its research and operations.”

“Brookings and all its personnel are governed by robust policies on research independence that do not permit any outside parties to undermine or compromise the independence of its research or its recommendations,” the spokesperson added. “The integrity and objectivity of Brookings scholars and their research constitute the institution’s principal assets.”

Allen resigned last month as Brookings’ president after the Justice Department disclosed a warrant application that alleged Allen had secretly lobbied for the government of Qatar in 2017 while seeking payment for that lobbying work. The warrant also claimed that he had lied to federal investigators about his actions and withheld evidence that prosecutors had sought in a subpoena.

As Mother Jones first reported last year, Allen worked with Richard Olson, a former United States ambassador to the United Arab Emirates and Pakistan, and Imaad Zuberi, a business executive, to advocate in the Trump White House for Qatar during a diplomatic crisis in 2017. Qatar’s neighbors, led by Saudi Arabia and the United Arab Emirates, had imposed a blockade on Qatar and had even threatened to invade the small, natural gas-rich state. The blockade won initial support from Trump. After traveling at Zuberi’s expense to Doha and meeting there with Qatar’s monarch, Allen urged then-national security adviser H.R. McMaster to consider the views of Qatari officials.

The Justice Department has said in court filings that Zuberi, who is serving a 12-year prison sentence in California following his conviction on other foreign lobbying and tax charges, was working as a Qatari agent in 2017. Federal prosecutors in April charged Olson with crimes related to lobbying for Qatar along with Zuberi. Olson has pleaded guilty to misdemeanor ethics violations for lying in ethics paperwork submitted to the State Department and violating revolving door laws. Allen has not been charged with any crimes and denies any wrongdoing.

“General Allen has never violated any laws and allegations to the contrary recently raised in media reports are simply untrue,” Beau Philips, an Allen spokesperson, said in a statement Thursday. “General Allen never acted as an agent of the government of Qatar or any other foreign government or principal. Through decades of public service in combat and diplomacy, General Allen earned an unmatched sterling reputation for honor and integrity. We look forward to his ultimate vindication in this matter.”

Federal prosecutors have indicated they are still investigating Allen. In their warrant application, they said that Allen negotiated to receive a $20,000 “speaker’s fee” in connection with his trip to Doha. (It’s not clear if he actually received payment.) The filing also quotes from a message in which Allen indicated he hoped to “work out a fuller arrangement of a longer term relationship.” Allen also sought other business with Qatari firms, prosecutors said.

Allen’s 2017 advocacy for Qatar came after Allen, the former commander of the NATO forces in Afghanistan, had left government and had begun working for Brookings. He became the think tank’s president later that year.

“While Allen has resigned,” Warren wrote Friday, “this incident raises broader concerns about conflicts of interest and foreign influence at Brookings, and the impact that these financial ties with foreign entities may have on Brookings Institution staff and the work they do.”

“This incident raises broader concerns about conflicts of interest and foreign influence at Brookings.”

Over the last few decades, Qatar has been a major donor to Brookings. In 2007, Qatar’s Ministry of Foreign Affairs agreed to provide $5 million to help fund a Brookings outpost in Doha. Politico reported last month that a memorandum of understanding between Brookings and Qatar said the center’s director would “engage in regular consultation with [the foreign ministry],” submitting to them a budget and an “agenda for programs that will be developed by the Center.” Changes to those programs would require the foreign ministry’s approval.

This agreement “appears to have significantly compromised the organization’s independence,” according to Warren. The arrangement, and Allen’s alleged actions, cast doubt on the independence “of all other Brookings scholars,” she wrote.

As Brookings’ president, Allen, in fact, oversaw the 2021 closure of Qatar’s Doha Center, along with the earlier closures of outposts the organization had set up in China and India and a reduction in donations from Qatar. Qatar’s Embassy was still listed in Brookings’ annual report last year as one its six largest donors, giving $2 million or more. But a spokesperson said Thursday that Brookings “currently receives no funds from Qatar.”

The spokesperson also cited guidelines that say Brookings will only accept money from “donors who will not undermine or compromise the independence of our scholars’ research or otherwise attempt to predetermine or influence recommendations.”