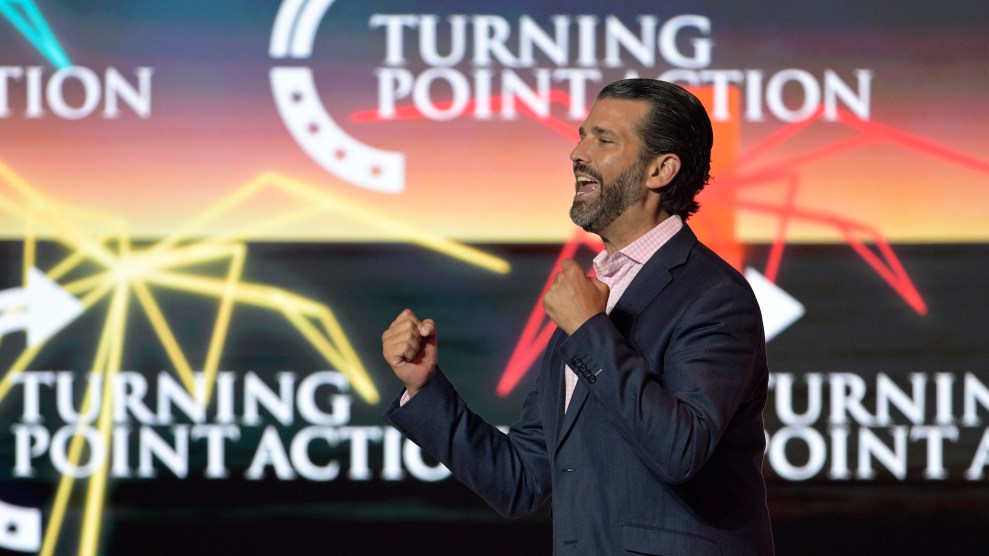 Turning Point USA has emerged as the conservative movement’s MAGA Youth wing—an institution fixated on spreading the right wing gospel among high school and college students, with particular focus on a certain former president/reality TV host. At the group’s annual Student Action Summit in Tampa Bay this weekend, MAGAland’s most prominent pols, PR hacks, and media operatives turned up to fire up an assembly of thousands. It was a bit on the nose when neo-fascists gathered outside the arena, brandishing swastika-emblazoned flags. (Event officials quickly denounced the spectacle as having “nothing to do with TPUSA, our event, or our students.”) Inside, as you might expect of such a confab, things got pretty juvenile. Here are some highlights.

• Eternal 13-year-old Rep. Matt Gaetz (R.Fl.) strutted his misogyny while airing his thoughts on the outrage generated by the Supreme Court’s overturning of Roe v. Wade. “Why is it,” he demanded to know, “that the women with the least likelihood of getting pregnant are the ones most worried about having abortions? Nobody wants to impregnate you if you look like a thumb.”

He actually said this https://t.co/6kdxn79anB

• Gun-mad restaurateur Rep. Lauren Boebert (R.-Colo.) sought to clear up a rumor I had never heard.

Lauren Boebert: "Contrary to popular belief, I have never been as escort for Senator Ted Cruz." pic.twitter.com/f7F8iiGncU

• In perhaps a sly nod to his his own obsequious relationship with Donald Trump, Ted Cruz delivered his pronouns.

BREAKING: ted cruz announces his pronouns are kiss/my/ass. i will be sure to respect ass’s new pronouns and i hope you all will too. pic.twitter.com/x7RBviRwLj

• Perhaps energized by the recent primetime hearings exposing his ignominious actions leading up to andon Jan 6, 2020, the Big Guy himself delivered a nearly two-hour harangue playing on familiar themes. Here he marvels at his own Christlike persecution:

Trump suggests he is the most persecuted person in American history as his audience sits in silence. Suffice it to say this was not a speech that will get TPUSA people pumped up. pic.twitter.com/FYNx77ENzo

Here, he airs his well-worn view on the fake-news media and its cursed awards (“maybe we’ll sue Pulitzer”):

Here, he airs the fantasy that he actually finished the border wall.

“Then we added much more—then we added a lot of additional wall.” https://t.co/wltnicj2mG

Perhaps calculating that a youth conference was no place to wonk out, Trump apparently decided not to discuss “Schedule F”—the policy centerpiece of his next presidency, should he retake the Oval Office. Under the plan, recently revealed by Axios’ Jon Swan, Trump would commit a mass purge of the federal bureaucracy, which he’d restock with fresh operatives, much like the youth assembled before him in Tampa Bay.

Trump is headlining Turning Point’s student action summit in Tampa tonight. According to excerpts shared ahead his speech he will talk about “draining the swamp” by reimposing “Schedule F,” as reported by @jonathanvswan: pic.twitter.com/JDtk6teThB

He never said any of this in his speech tonight. https://t.co/6hbxEmYPD6

The president did, however, vow to own the libs by running in 2024. “If I stayed home, if I announced that I was not going to run for office, the persecution of Donald Trump would immediately stop,” he declared. “But that’s what they want me to do. And you know what? There’s no chance I do that.”