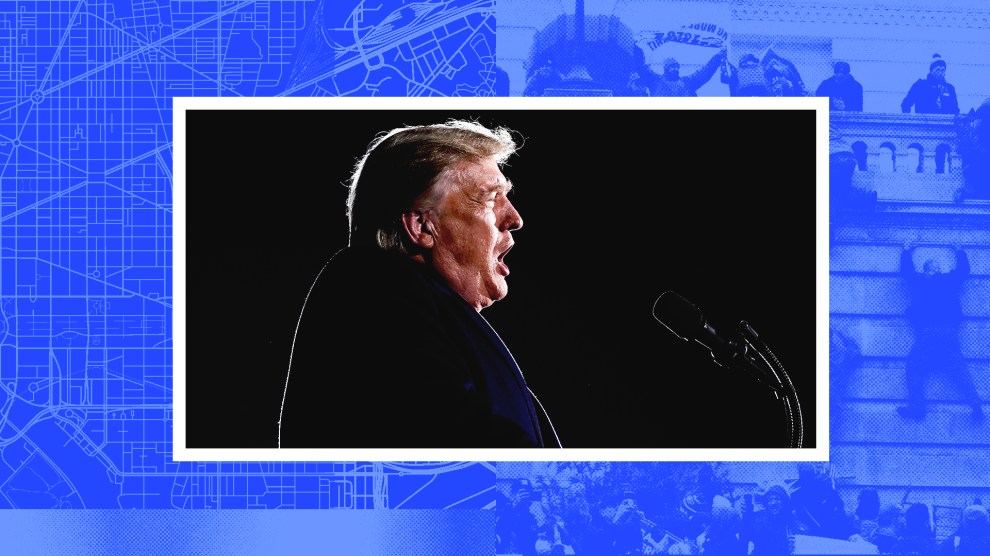 Two of the most important days in Donald Trump’s plot to overturn the 2020 presidential election arguably were December 18 and 19.

That’s when Trump sought to take the kooky coup advice of “Kraken” lawyer Sidney Powell and that of his QAnon–besotted former National Security Adviser Michael Flynn to seize voting machines in a last ditch effort to claim that election fraud had delivered the election to Joe Biden. When White House lawyers effectively foiled those plans during a contentious Oval Office showdown, according to testimony gathered by the House committee investigating January 6, Trump switched his focus to pressuring Mike Pence with claims that his vice president could throw out electoral votes.

Trump also stepped up efforts around that time to assemble a horde of supporters in Washington, to intimidate Pence and Congress with an unlikely and illegal scheme that might allow the defeated president to cling to power. “Big protest in D.C. on January 6th,” Trump infamously tweeted at 1:42 a.m. that morning. “Be there. Will be wild!”

During a congressional hearing on Tuesday, Democratic Rep. Jamie Raskin and fellow members of the bipartisan House committee investigating January 6 homed in on Trump’s actions in those pivotal days in mid December 2020. They depicted a president hell bent on doing whatever he could to stay in power. Trump didn’t care about the reality of the election—he had extensive information indicating his fraud claims were false, according to further testimony shown on Tuesday, including from former White House Counsel Pat Cipollone. Trump apparently was not bothered by the likelihood of violence; other recent testimony indicated that urged supporters to march on the Capitol on January 6 knowing they were armed.

The hearing detailed the already infamous hours-long meeting on December 18 in which Flynn and Powell, along with Overstock CEO Patrick Byrne, got into Trump’s office without an official appointment and pressed Trump to sign an executive order allowing the Defense Department to seize voting machines. The effort also included seeking get Powell appointed as a special counsel who would be empowered to look for voter fraud she’d spent the prior month falsely claiming to have found.

Notably, testimony on Tuesday indicated that Trump wanted to go with the proposals from Powell and Flynn, with him remarking that, unlike White House aides, they were offering “solutions.” Playing clips of depositions from Powell and Rudy Giuliani, and from Cipollone, who gave the committee sworn testimony for the first time late last week, committee members outlined a raucous confrontation. Giuliani said in one clip that during the meeting he had called the White House lawyers “pussies.” Powell said she thought Trump should have fired them on the spot. Cipollone and another White house lawyer, Eric Herschmann testified about trading insults and threats with Powell and Giuliani.

“What they were proposing, I thought was nuts,” Herschmann said of the schemes proposed by the Trump loyalists.

Trump chief of staff Mark Meadows reportedly escorted Giuliani out of the White House at the conclusion of the meeting to keep him away from Trump. Powell claimed that Trump had appointed her special counsel during the meeting, but that White House lawyers had announced they would ignore this.

“The west wing is UNHINGED,” former White House aide Cassidy Hutchinson, the star witness of a previous committee hearing, wrote in a text message to another White House staffer describing the meeting.

Amid all this drama, Raskin pointed out, was evidence that Trump was repeatedly told by various lawyers and advisors that his election fraud claims were completely unfounded. Trump, Raskin said, had to listen as top White House lawyers “destroyed” the false election fraud claims advanced by Powell and Giuliani, and by Trump himself. “Trump now knew all these claims were nonsense,” Raskin said.

Various reports have previously established that Trump’s December 19 tweet summoning supporters to Washington January 6 was widely shared on the far right. But Raskin also noted that the tweet came immediately after the Oval Office showdown that night ended.

“In the wee hours of Dec. 19, dissatisfied with his options, Donald Trump decided to call for a ‘large and wild crowd’ on Wednesday, Jan. 6, the day when Congress would meet to certify the electoral votes,” Raskin said.

The committee highlighted how Trump’s extremist supporters quickly heeded the president’s tweet, including Proud Boys and Oath Keepers. Far-right sites like TheDonald.win lit up with explicit calls for violence on January 6, the committee showed.

The pro-Trump group Women for America First, and the Stop the Steal group headed by Ali Alexander, immediately began seeking permits for demonstrations to support Trump on January 6.

Kelly Meggs, the head of the Florida chapter of Oath Keepers militia, less than nine hours after Trump’s December 19 tweet, said in a Facebook message that he had “organized an alliance” between Oath Keepers and Three Percenters. “We have decided to work together and shut this shit down,” he wrote. On Tuesday, the committee revealed that Meggs called Enrique Tarrio, the head of the neofascist Proud Boys, later on Dec. 19. The next day, Tarrio set up a new Proud Boys group on Signal for January 6 planning. Tarrio and Meggs are among groups of Proud Boys and Oath Keepers since charged with seditious conspiracy.

Meggs was part of a group of Oath Keepers who provided security for Roger Stone on January 5 and 6—and records show they had multiple conversations those days, the panel revealed.

Many people worried about violence brewing ahead of January 6, the committee further showed on Tuesday. An anonymous Twitter executive said in a deposition that, based on rhetoric he saw Trump and his supporters using on the platform, he feared that “people were going to die” on January 6. Katrina Pierson, a former Trump campaign spokesperson involved in organizing Trump’s January 6 rally, said in a deposition that she told Meadows she was concerned about the “crazies” involved with the rally, including Ali Alexander and popular far-right conspiracy theorist Alex Jones.

The committee also revealed Tuesday that Steve Bannon spoke repeatedly with Trump the day before the assault on the US Capitol. After one call, Bannon excitedly declared on his podcast that on January 6, “All hell is going to break loose.”

Trump ally Roger Stone was also excited in the run-up. “This is nothing less than an epic struggle for the future of this country between dark and light, between the godly and godless, between good and evil,” Stone said in a speech to Trump supporters on the night of January 5, as Mother Jones previously reported.

The committee showed further evidence of Trump’s intent to spearhead the pressure on Pence and Congress. In a tweet drafted by the president but never posted, Trump said: “I will be making a Big Speech at 10 a.m. on January 6th at the Ellipse (South of the White House). Please arrive early, massive crowds expected. March to the Capitol after. Stop the Steal!!”

Trump recently has intimated that he may announce another presidential bid as soon as this summer. But meanwhile, the panel’s Vice Chair, Republican Rep. Liz Cheney, disclosed recently that a witness had been pressured by Trump associates ahead of a deposition by the committee, in what Cheney suggested could be felonious witness tampering. Cheney added to that disturbing picture on Tuesday: Trump himself, she said, had “tried to call” a witness, whose identity is not yet known to the public. The witness did not take the call and informed his or her lawyer, who informed the committee. Cheney said the panel passed the information to the Justice Department. “We will take any effort to influence witness testimony very seriously,” she said.

A Trump spokesperson on Tuesday accused Cheney of trafficking “in innuendos and lies” but did not specifically deny that Trump had called a committee witness.