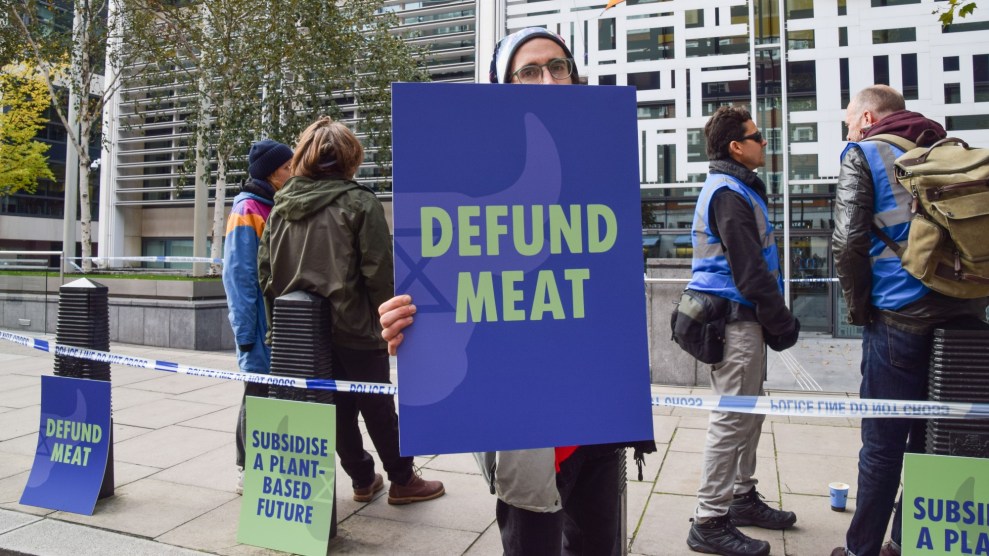 Investments in plant-based alternatives to meat lead to far greater cuts in climate-heating emissions than other green investments, according to one of the world’s biggest consultancy firms.

The report from the Boston Consulting Group (BCG) found that, for each dollar, investment in improving and scaling up the production of meat and dairy alternatives resulted in three times more greenhouse gas reductions compared with investment in green cement technology, seven times more than green buildings and 11 times more than zero-emission cars.

Investments in plant-based alternatives to meat delivered this high impact on emissions because of the big difference between the greenhouse gases emitted when producing conventional meat and dairy products, and when growing plants. Beef, for example, results in six-to-30 times more emissions than tofu.

Investment in alternative proteins, also including fermented products and cell-based meat, has jumped from $1 billion (£830m) in 2019 to $5 billion in 2021, BCG said. Alternatives make up 2 percent of meat, egg, and dairy products sold but will rise to 11 percent in 2035 on current growth trends, the report said. This would reduce emissions by an amount almost equivalent to global aviation’s output. But BCG said meat alternatives could grow much faster with technological progress resulting in better products, scaled-up production, and regulatory changes making marketing and sales easier.

“Widespread adoption of alternative proteins can play a critical role in tackling climate change,” said Malte Clausen, a partner at BCG. “We call it the untapped climate opportunity—you’re getting more impact from your investment in alternative proteins than in any other sector of the economy.”

“We call it the untapped climate opportunity—you’re getting more impact from your investment in alternative proteins than in any other sector of the economy.”

“There’s been a lot of investments into electric vehicles, wind turbines, and solar panels, which is all great and helpful to reduce emissions, but we have not seen comparable investment yet [in alternative proteins], even though it’s rising rapidly,” he said. “If you really care about impact as an investor, this is an area that you definitely need to understand.”

Meat and dairy production uses 83 percent of farmland and causes 60 percent of agriculture’s greenhouse gas emissions, but provides only 18 percent of calories and 37 percent of protein. Moving human diets from meat to plants means less forest is destroyed for pasture and fodder growing and fewer emissions of the potent greenhouse gas methane produced by cattle and sheep.

Europe and North America will reach “peak meat” by 2025, at which point consumption of conventional meat starts to fall, according to a separate BCG report in 2021. Another consultancy, AT Kearney, predicted in 2019 that most of the meat products people eat in 2040 will not come from slaughtered animals.

Scientists have concluded that avoiding meat and dairy products is the single biggest way to reduce your environmental impact on the planet and that large cuts in meat consumption in rich nations are essential to ending the climate crisis. The Project Drawdown group, which assesses climate solutions, places plant-based diets in the top three of almost 100 options.

“Alternative proteins have received only a fraction of the investment deployed in other sectors,” the BCG report said. “Buildings have received 4.4 times more mitigation capital than food production, even though building emissions are 57% lower than those tied to food production.” Switching from conventional meat to alternatives is also much less disruptive to consumers than flying less or retrofitting their homes, the report said.

The estimates of the differing emissions cuts resulting from investments in different sectors were made by BCG using a methodology developed by the Global Financial Markets Association. Blue Horizon, an investor in alternative proteins, also contributed to the new report.

Bjoern Witte, at Blue Horizon, said: “The products consumers are seeing on the shelves today will be followed by a wave of cleaner, healthier and tastier alternative proteins, as technology allows for increasing innovation. We’re just at the beginning, really.”

Dr Jonathan Foley, at Project Drawdown, said: “About a quarter of the world’s greenhouse gas emissions comes from food, land use, and agriculture and more than half of that is from beef alone. So this is a very big area to focus on, and one that has been relatively under-invested in.”

“[Alternative proteins] are a potentially large climate solution,” Foley said. “But it shouldn’t be seen as a stand-alone solution and could be combined with many others, including cutting food waste overall, shifting to more plant-rich diets, and farming the meat and dairy products we still might eat better.”

Malte said a move towards plant-based meats could also help alleviate food crises. “You are cutting out the ‘middleman’, whether it’s a cow, a pig, or a chicken. It’s just mathematics: if instead of feeding all of these crops to animals, and then eating the animals, you just use the crops directly for human consumption, you need fewer crops overall and therefore alleviate the constraints on the system.”

The report also included a survey of more than 3,700 people in the UK, US, China, France, Germany, Spain, and the United Arab Emirates. It found 30 percent of consumers would switch to alternative protein products if they had a positive climate impact. About 90 percent of people said they liked at least some of the alternative-protein products they had tried. But the survey found that consumers expected the products to cost no more than those they were replacing.