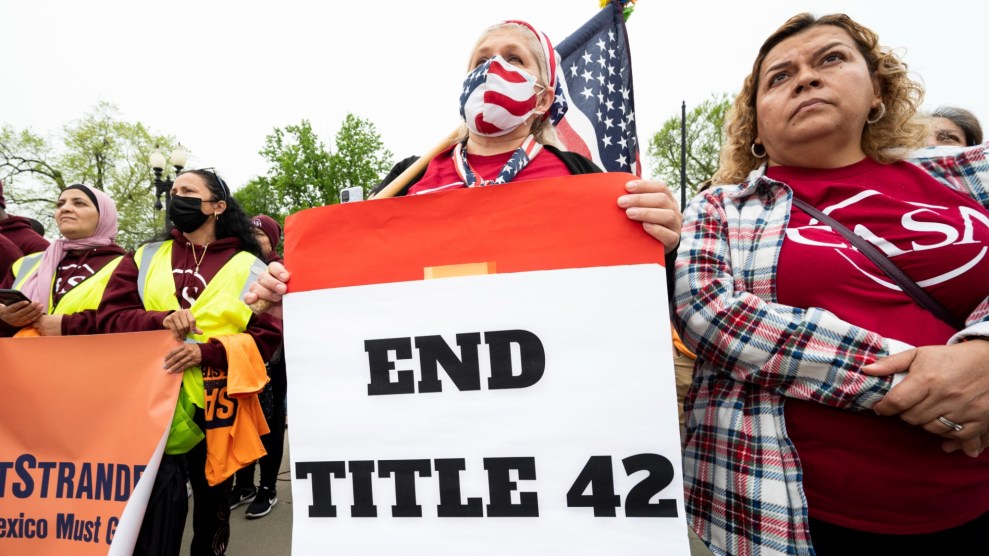 Woman protests against the "Remain in Mexico" policy in front of the Supreme Court.Michael Brochstein/Sipa USA/AP

On June 30, the Supreme Court handed down its last and virtually only uplifting decision in an otherwise regressive and chilling term. After killing Roe v. Wade and the constitutional right to abortion, limiting Miranda Rights protections, and delivering a blow to climate action, the conservative supermajority decided not to add the rights of immigrants to their list of casualties—at least not entirely—and gave a rare win to the Biden administration.

In the highly anticipated case of Biden v. Texas, the justices ruled in a split 5-4 vote that the Biden administration could terminate one of the Trump era’s most nefarious immigration policies, the Migrant Protection Protocols program. (Justice Amy Coney Barrett agreed with the majority’s view on the merits of the case but “not with its decision to reach them.”) Informally known as “Remain in Mexico,” the initiative left more than 70,000 non-Mexican asylum seekers stranded in dangerous border towns as their cases made their way through US immigration courts.

There’s no denying the Supreme Court decision represents a very real victory for immigrants and their allies as it basically authorized the end of MPP. But as I’ve written before, at the center of this case was not only the fate of this particular program but also the question of how much authority the executive branch has to undo policies implemented by a previous administration with which it disagreed, as well as whether states can continue to dictate federal immigration policy through the courts. The ruling in Biden v. Texas is likely to influence future litigation on immigration issues and not always to the benefit of immigrants.

Here’s a brief recap: The Biden administration sought to terminate the policy on its first day in office and on June 1, 2021, Department of Homeland Security (DHS) Secretary Alejandro Mayorkas issued a memo officially ending MPP. He said it “does not adequately or sustainably enhance border management in such a way as to justify the program’s extensive operational burdens and other shortcomings.”

But the states of Texas and Missouri sued to prevent the termination of the policy, arguing that the government only had two real options: detain all arriving migrants or send them to Mexico. The US District Court for the Northern District of Texas sided with the states, finding that the DHS June memo ending MPP was “arbitrary and capricious,” and ordered a nationwide injunction forcing the Biden administration to reinstate the policy. As many as 5,000 asylum seekers were enrolled in the relaunched and expanded version of “Remain in Mexico,” which continued throughout the litigation.

To more deeply understand and unpack the legal implications of this Supreme Court ruling, I spoke separately with two experts: Michael Kagan, an administrative and immigration law professor and director of the University of Nevada, Las Vegas, immigration clinic, and Kate Melloy Goettel, legal director of litigation at the advocacy group American Immigration Council. “In baseball terms, I would say this decision is good: It’s a single, it’s not a home run,” Kagan told me. “I’m not even sure it’s a double.”

On the impact on future litigation: The majority decision delivered by Chief Justice John Roberts states that the District Court of Texas didn’t have the authority to block the termination of MPP. That ruling built on another recent decision by the Supreme Court in this term’s case, Garland v. Aleman Gonzalez, where the justices held that lower courts can’t issue “injunctions that order federal officials to take or to refrain from taking actions to enforce, implement, or otherwise carry out the specified statutory provisions.” Injunctions, Goettel explains, are powerful tools “to get immigration agencies to either do something or to stop doing something.”

Indeed, Republican-led states have been resorting to lawsuits that result in nationwide injunctions to stop the Biden administration from setting its own immigration agenda, leading to a concerning scenario where a handful of states and courts, as opposed to Congress or the executive branch, are dictating policies for the entire country. In this case, the Supreme Court ruling regarding injunctions benefited immigrants, but moving forward, Goettel explains, it could be a “double-edged sword,” also narrowing paths for pro-immigrant rights groups and migrant plaintiffs to obtain broad relief in cases involving enforcement and removal. “We’re thrilled that it cuts this way for the termination of the remain in Mexico program,” Goettel says, “but it will be a limitation for bringing lawsuits against Immigration and Customs Enforcement (ICE) and Customs and Border Protection (CBP).”

Kagan points out that when there’s a Democrat in the White House, the issues tend to focus on “what authority courts would have to prevent more pro-immigrant policies. But these questions would also have big implications in a future Republican administration, when quite likely you’d have the shoe on the other foot with blue states challenging anti-immigrant policies from Washington.”

On prosecutorial discretion and parole: The Supreme Court disagreed with the arguments from Texas and the lower courts to support the continuation of MPP, in which they asserted that the government only has two legal options—mandatory detention or return to Mexico—to manage migrant arrivals. Instead, the decision made clear that a third option is available under the Immigration and Nationality Act (INA), and that option is parole. In the context of immigration, that means allowing someone to enter the United States while they await their asylum hearing.

“Every administration, including the Trump and Biden administrations, has utilized this authority to some extent,” the majority wrote. “Importantly, the authority is not unbounded: DHS may exercise its discretion to parole applicants only on a case-by-case basis for urgent humanitarian reasons or significant public benefit.” In this case, the Supreme Court refused to weigh in on whether the government “is lawfully exercising its parole authorities,” but the affirmation of prosecutorial discretion in this decision, Goettel says, can influence future decisions on challenges to other policies as well. “We’re obviously going to be litigating what it really means in many future cases,” she says.

On what comes next for MPP: On October 29, 2021, DHS issued a second memo terminating MPP “as soon as practicable after a final judicial decision to vacate the injunction.” The Supreme Court paved the way for that to happen by ruling that this memo constitutes “final agency action.” But DHS Secretary Mayorkas said it may take several weeks before “Remain in Mexico” ceases to be operational. “The court’s decision didn’t become effective on the day it was issued,” Goettel says. Based on the Supreme Court ruling, the District Court will still have an opportunity to review the latest memo issued by DHS ending the policy to determine whether it complies with the Administrative Procedure Act (APA).

On questions left unanswered: For Kagan, the Supreme Court ruling in Biden v. Texas didn’t go far enough in resolving the “judicial instability” caused by having “changes in immigration policy [be] almost immediately brought to the courts.” It has also left unanswered questions about the future of other immigration policies being litigated, including Title 42—an obscure pandemic-era public health order sealing the border for most migrants and asylum seekers. Add to that the ongoing challenges to another policy Secretary Mayorkas put forward in September narrowing DHS’s enforcement priorities to focus on “those who pose a threat to our national security, public safety, and border security.”

“Those suits enmesh the Judiciary in policy disputes between States and the federal government that should be—and, until recently, were—resolved through the democratic process.”

Similar to what happened with MPP, Texas and Louisiana challenged the enforcement priorities guidance and a Trump-appointed federal judge blocked its implementation, a ruling the Fifth Circuit Court of Appeals just affirmed. In response, the Biden administration has asked the Supreme Court to allow it to rollout the guidance. “Those suits enmesh the Judiciary in policy disputes between States and the federal government that should be—and, until recently, were—resolved through the democratic process,” the government’s legal filing states. “And they allow single district judges to dictate national policy, nullifying decisions by other courts and forcing agencies to abruptly reverse course while seeking review of novel and contestable holdings.”

While the high court ruled decisively in the Biden administration’s favor on its authority to end “Remain in Mexico,” Kagan says, it avoided offering any clarity about enforcement discretion more generally. As a result, these other cases will keep appearing with the result that many of Biden’s immigration policies likely will remain unstable. “That’s kind of the normal situation we’ve been living with for a while,” he adds. “A whole lot of lives hang in the balance with litigation with really uncertain results.”

“Most of these policies, when you take them together, are an attempt to return to normal, or what we thought was normal before Trump took office,” Kagan says. “What should be most alarming for immigrant rights advocates and for immigrants is that Trump policies have really been normalized both in the court and in political discourse. The exceptional has been normalized and it is as if the Trump administration lives on, even though Trump isn’t in office anymore.”