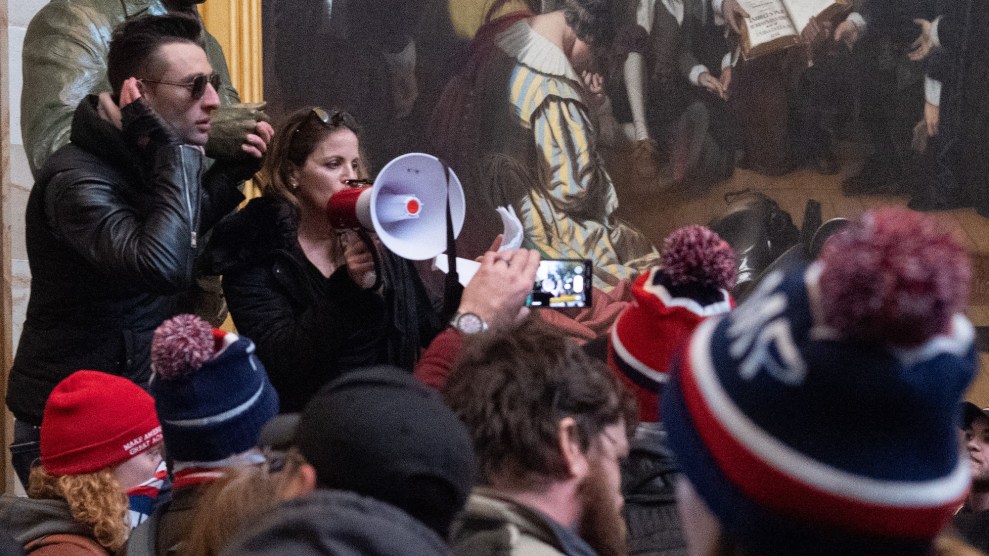 Just before she reported to prison on Tuesday for her involvement in the January 6 Capitol insurrection, anti-vaccine doctor Simone Gold fired off one last missive to her fans complaining about the injustice of her sentence. She claimed that the judge who sent her to prison, US District Judge Christopher Cooper, was filled with “personal animus” for her because she’d once turned him down for a date when they were both at Stanford law school more than 30 years ago.

Both an emergency room doctor and a lawyer, Gold is perhaps the best educated of all the January 6 criminal defendants, a fact she has never missed an opportunity to highlight. Her elite credentials helped turn her into a right-wing media star at the beginning of the pandemic, when she would don her white doctor’s coat and speak out against lockdowns. Standing in the Capitol rotunda during the assault, she declared for all to hear, “I am a Stanford-educated attorney,” before launching into a speech about vaccine mandates. When she pleaded guilty in March to a misdemeanor charge for illegally entering a restricted building, she insisted Judge Cooper address her as “doctor.” She has argued throughout her prosecution that her credentials should insulate her from the prison terms being handed down to her fellow rioters.

But in June, Cooper sentenced her to 60 days in prison. The sentence was a month less than what prosecutors had asked for, and four months less than what a probation officer exasperated with her lack of honesty had requested, but within the federal sentencing guidelines for her crime. Cooper indicated during her sentencing hearing that he didn’t believe she had accepted responsibility for her actions, nor had she demonstrated any remorse about her part in the riot, which led to the deaths of five people. As evidence, he pointed to fundraising appeals for her group, America’s Frontline Doctors, in which she portrayed herself as an innocent victim of government persecution. “You were not just a casual bystander,” Cooper told her.

During her court hearings, Gold was demure and reserved, and very unlike the impassioned woman in her videos. She never once mentioned her alleged date with the judge, in court or in court filings. But before heading off to prison this week, she sent a statement to Julie Kelly at the pro-Trump outlet American Greatness describing her past interactions with Cooper, who goes by Casey:

Casey and I had several social interactions. There are two that stand out. One was one time when we walked/talked for some time (perhaps two hours) and got some food. I believe this was second half of first year. My recollection was we walked from the Law School to a common area (on campus). I don’t recall what we ate etc. I recall general conversation—that he was from the south, that he had gone to Yale, that he was ambitious. The conversation was pleasant. My impression was that he was cute and that he thought similarly of me. We had other brief “hello how are you” pleasantries. The other interaction that stood out was a week, perhaps two weeks later. This was in the (outside) courtyard of the Law School and we were just talking. After about 10-15 minutes Casey asked me out again, this time a formal invitation to a dinner date, following our prior less formal interactions. This I declined. Just because I wasn’t interested.

Cooper declined to comment on her allegations, though he did attend Stanford at the same time Gold was there.

According to her statement to Kelly, Gold didn’t raise the issue of the alleged date for two reasons. At first, she thought Cooper would recuse himself, and then she apparently had hoped whatever their previous relationship was might work in her favor. Instead, she now believes, Cooper was still harboring a grudge. “I also am able to assess mood quickly based upon my years in the emergency department,” Gold wrote. “This Judge was filled with so much animus it qualified as rage.”

On January 6, Gold had joined an angry mob and pushed her way to the doors of the House chambers. She brushed past a fallen officer as she muscled through a broken door at the Capitol, a scene captured on video:

As the crowd began to force their way into the Capitol building, Dr. Simone Gold and John Strand were part of the crowd that violently pushed/pulled an officer down the stairs.

I slowed down/highlighted the pair currently being sought by the FBI.
H/T: @Cineaste_C
🎥: NyPost pic.twitter.com/nf7PGOqwJG

Yet in Gold’s telling, Cooper threw the book at her because she’d declined to have dinner with him 30 years ago. In her statement, Gold complains that she is being singled out with her sentence, and she is outraged that she’s being treated like a common criminal, writing, “And I might add, I am not going to a prison camp, but a federal detention center.”

If Cooper found Gold unrepentant before her sentencing, her conduct afterward has been even more defiant. Gold posted this video after her sentencing, complaining about her “unconscionable” sentence:

America’s Frontline Doctors founder Simone Gold is outraged about the 60 day jail sentence she received for her role in J6: “It’s unheard of. I don’t know anyone who’s ever gone to prison for a misdemeanor .. it’s unconscionable.” pic.twitter.com/I4y37NsSYd

She has even set up a new website www.freedrgold.org to fundraise off her incarceration, complete with a countdown clock ticking off the minutes before she will be released.

“As a nonviolent female with a lifetime of service to the poor and underprivileged in the nation’s emergency rooms, a first-time misdemeanor plea for trespass carries only an expected punishment of community service,” the donation page says. “Her judge demonstrated extreme prejudice and personal animus, issuing a wildly inappropriate prison term. Like most January 6th defendants, she is a victim of selective prosecution–the defining feature of corrupted governments.”