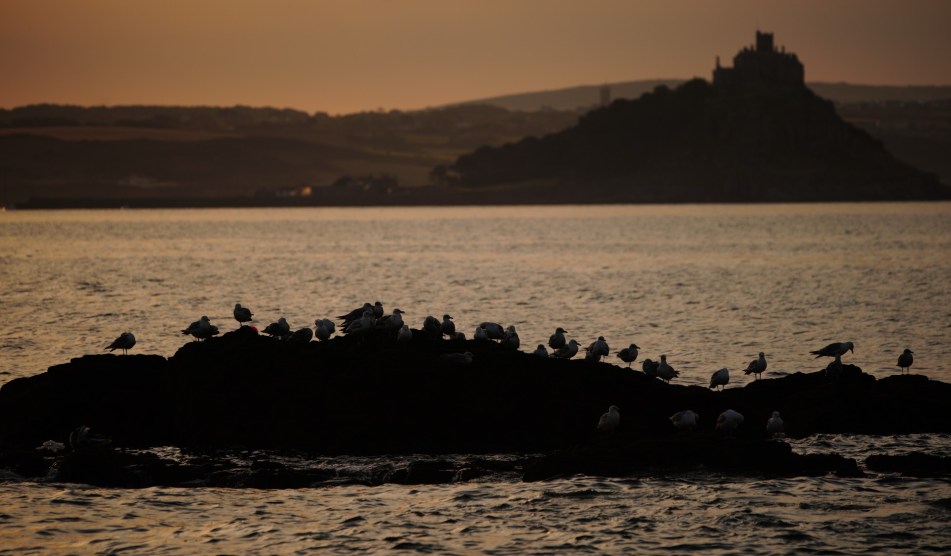 A quarter of Europe’s breeding seabirds spend spring in the UK, turning our coastline into a giant maternity unit. These noisy outcrops usually stink of bird poo. However, this year has been different. “Instead of the smell of guano, it’s the smell of death,” says Gwen Potter, a National Trust countryside manager working on the Farne Islands, off the coast of Northumberland. “It’s completely horrendous.”

This annual congregation of life has turned into a super-spreader event, as a highly pathogenic avian influenza, H5N1—also known as bird flu—sweeps through populations of breeding birds, causing devastating losses. More than 300 outbreaks have been reported in UK seabird colonies, and dozens of coastal sites have closed to the public.

The Farne Islands are home to 200,000 seabirds, including Arctic terns, Atlantic puffins, guillemots, kittiwakes, and razorbills. Potter is one of many conservationists swapping binoculars for a hazmat suit, picking up the bodies of birds she has spent her career trying to protect. Birds will sit on the ground, unable to move, twisting into unnatural positions, before dying. It is happening with chicks, too, still gently trying to flap as they die. “It sweeps through, takes everything in its path. It doesn’t seem to spare anything, really…We’ve collected thousands of dead birds, and that’s the tip of the iceberg. It’s just the scale of it which is hard to grasp,” she says.

Early observations suggest that how closely the bird’s nest is a key factor in how quickly the virus is transmitted. Guillemots nest quite densely, and kittiwakes are often next to them, which makes them vulnerable, although there is more space between them. Terns also nest densely and already 25 percent of the 350 sandwich terns on the Farne Islands are thought to have died, according to Potter. Some seabird chicks jump into the sea prematurely if their parents have died, while others starve in the nest.

Most seabirds will fly away in the coming weeks once their chicks are raised, but the true impact on populations will not be known for a few years, with concerns that some may never recover. “I don’t want to contemplate that because it will make me cry,” says Potter.

Britain has about 8 million seabirds, including 90 percent of the world’s Manx shearwater and about two-thirds of northern gannets and great skuas. Any impact on these populations is of global conservation significance. “Tens of thousands of birds must have died, maybe hundreds of thousands. It seems as though this breeding season will have been a disaster. Many will have died on remote islands, but the monitoring is nowhere near good enough,” says the ornithologist Mark Avery, who describes the deaths so far as an international disaster. “Already, it looks very serious and I fear this is just the start.”

Seabirds are particularly vulnerable because they are typically long-lived animals that don’t reach breeding age until they are about five years old. They generally only have a few chicks, so populations take longer to recover. Nationally, the three species that are most at risk are the great skua, gannet and sandwich tern, according to Niall Burton, from the British Trust for Ornithology.

The world population of great skua is about 16,000 and early research on the impact of the disease suggests that between 64 percent and 85 percent of the population at some sites have died, mainly in Shetland, Orkney and the Outer Hebrides. Burton says it will take several years for populations to recover but that it was too early to be more exact.

The biggest population of gannets on the planet, at St Abb’s Head, in Berwickshire, Scotland, has been halved. Gannets nest in large colonies and there are few of them in the UK as a whole. Bird flu seems to be present in most of them, with a few exceptions in Ireland and Wales.

“We are talking about very long-term recovery. It’s something that is unprecedented, certainly in my lifetime.”

Across the Channel, 10 percent of France’s total breeding population of sandwich terns is believed to have died in the space of a week, with high casualties also reported in the Netherlands. Coquet Island, off the Northumberland coast, is the UK’s only colony for breeding roseate terns, with about 150 breeding pairs. More than two-thirds of chicks have died.

“We are talking about very long-term recovery. It’s something that is unprecedented, certainly in my lifetime,” says Burton.

The story of this latest bird flu epidemic dates back to 1996 when the H5N1 strain was found in a population of commercial geese in Asia. In 2005, wild birds started dying en masse. The current wave of the H5N1 strain has resulted in more than 77 million domestic birds being culled. About 400,000 non-poultry birds—which includes wild birds—are reported to have died, which is double the number of deaths in the previous wave, in 2016-17.

For the first half of this year, H5N1 was a problem for domestic poultry, leading all chickens to be shut inside between November last year and May, with the result that at one point it was impossible to get UK free-range eggs. Already there were reports of the disease’s impact on wild wintering populations, including the death of more than one-third of the Svalbard barnacle goose population on the Solway Firth (16,500 out of a total population of 43,000). There were reports of birds “falling from the sky in distress.”

With the arrival of spring, the problem escalated. It is now considered to be the worst ever bird flu outbreak in the UK, noted for the large area it has affected but also high levels of chick mortality. Almost every country in Europe has had cases in the latest outbreak, as well as those in North America, West Africa, and Asia.

Fragmented bird populations are most at risk. There are about 8,000 Dalmatian pelicans left in the world, and more than 2,000 have already died from bird flu. “We are facing an event of mass extinction of animals. Entire populations are affected by this virus,” says Uri Naveh, a senior scientist at the Israel Parks and Nature Authority.

Early observations suggest that about 50 percent of birds infected with the virus die from it, but Prof Diana Bell, a conservation biologist at the University of East Anglia, who studied the H5N1 strain back in 2007, says the figure is more like 100 percent. “Anything that gets infected is not going to survive, unless the H5N1 has attenuated in its virulence during that time, but I don’t think so,” she says.

“I look in horror at what it is doing to our birds…We just have to really hope there are a decent number that have survived, but I don’t think it’s because they’ve had it and they’ve recovered.” Bell’s research suggests it affects birds in most orders. Tigers have been fed infected poultry and died, she says, and there have recently been reports of seals dying from it in the US.

In terms of how the virus will spread, Prof Paul Digard, the chair of virology at the Roslin Institute, University of Edinburgh, says it is impossible to generalize from one species to another, so he doesn’t believe it will kill 100 percent of those it infects, partly because of intrinsic genetic differences, and partly because of factors such as stress, age and other traits in specific populations.

He says H5N1 is causing a huge amount of damage because it is spreading among populations that have not had the virus before, but that this will change in the future because some will survive. “My guess is that things will calm down over time as populations gain immunity to this circulating strain of virus. I would hope not to see the same levels of mortality in the coming years, but that’s something of a guess,” he says.

The main factors contributing to its spread are international trade, the farming and sale of birds, and the migration of wild birds, according to the World Organisation for Animal Health. Birds that have no symptoms could be super-spreaders because they can still fly long distances.

However, Bell says she has never heard of an asymptomatic bird with the virus and therefore doesn’t think wild birds would be able to spread it over long distances. She believes the international poultry trade is the main driver of the virus and says stopping imports of chicks and birds for the trade would be an important step in reducing the risk of future outbreaks. “Originally, it was poultry to wild birds; it was not wild birds which were spreading it. It was frustrating to see wild birds being blamed … We’ve got to get out of our heads that the wild birds are the bad guys here,” she says.

The public should keep their distance from any carcasses and report them to the government helpline. At the moment it does not appear to be infecting humans, but previous strains of the virus have. “If you see a sick bird, leave it be, I’m afraid,” says Digard. “Don’t take it to an animal shelter. You are potentially signing a death warrant for all the other birds in that shelter.”

The most important thing would be better surveillance of the situation, says Potter, who believes there needs to be a government-led plan for all four UK countries, with guidance for effective carcass collection and testing, and better biosecurity on poultry farms. Seabirds have already been hit by a range of threats, including habitat loss, overfishing and climate change; their populations have halved since the 1980s. Reducing these other pressures would make them more resilient to bird flu.

A spokesperson for the Department for Environment, Food and Rural Affairs said: “There are limited effective actions that can be taken to protect wild birds, as opposed to captive bird flocks. Due to the migratory habits of wild birds, it will only be with breeding season monitoring next year that the full impact will become apparent. However, the Animal and Plant Health Agency (APHA) carries out year-round avian influenza surveillance of dead wild birds, and clear public guidance has been issued not to handle their carcasses.”