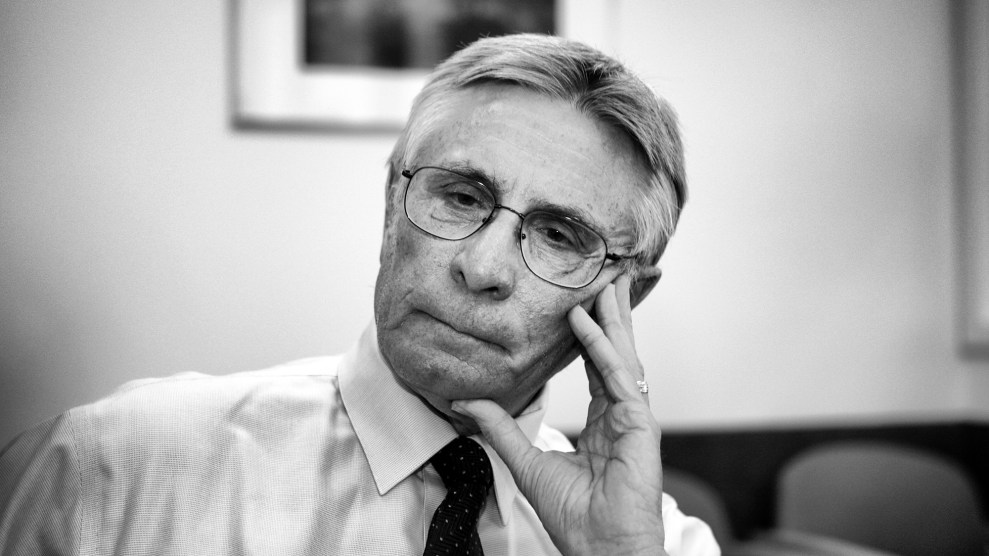 Dr. Warren Hern talks about the shooting death of his friend Dr. George Tiller during an interview at his clinic in Boulder, Colorado in 2009.Ed Andrieski/AP

Abortions that occur after 21 weeks gestation are vanishingly rare, accounting for about 1 percent of all abortions nationwide. The doctors who perform abortions later in pregnancy are even rarer: The 2013 documentary After Tiller cited just four doctors in the United States who performed abortions in the third trimester.

One of them is Dr. Warren Hern. He has operated in Boulder, Colorado, for decades, despite a constant onslaught of violence and harassment.

Last week, I caught up with Hern, now 84, by phone while he was in Washington, DC, visiting a colleague’s clinic. We discussed the necessity of this particular type of abortion and the challenges of providing abortion care in a post-Roe world. Our conversation has been lightly edited and condensed for clarity.

What has changed for you already in the weeks after Roe was overturned?

I’d say that we’re busier than we have been. We’re sort of maxed out, and we’re struggling to take care of all the patients that want appointments. We’re booked several weeks out now. That’s bad for the patients, that they have to wait. But that’s happening all over the country because of what happened in Texas and the other red states.

Do you worry that Colorado could make abortion illegal as well?

It’s always a possibility. Right now, the Democrats are in charge of the state legislature. We have an excellent pro-choice Democratic governor, Jared Polis, who just signed an executive order to protect women who are coming to Colorado to have abortions from being prosecuted in their home states. And the same executive order protects those of us who want to help them.

The Democrats passed the Reproductive Health Equity Act earlier in the year, against the spirited opposition of the Republicans.

The bottom line is that at this point, in this country, a woman’s life and health are at the mercy of the next election. And it’s at the mercy of her zip code. And she’s also at the mercy of Mitch McConnell, who knows nothing about what we’re doing and how this affects people.

What are your biggest worries about abortion care in the post-Roe era?

I worry about the patients. As a result of this Dobbs decision, women are going to die, as they did before Roe, because they’ll be desperate and they may try to perform abortions on themselves without adequate medical care. Or they may be carrying a pregnancy that’s a more than usual threat to their lives.

People don’t understand that pregnancy is not a benign condition. Women die from being pregnant. That’s why they have a whole specialty—obstetrics and gynecology—to take care of them to assure their survival during the pregnancy, and ensure them having a healthy baby when they finish the pregnancy. But the laws interfere with this basic medical care for women.

Imagine a situation in Texas, for example, and many other places, where a woman is below the poverty line, or getting by, and has children that she can’t support and has a job that barely pays her minimum wage, if that, and she doesn’t have bus fare to go from one end of the town of the other—forget about flying to some other place. She’s either going to have the baby that she can’t afford and can’t take care of, or try to do this on herself. And the consequences for her and her family and for society are catastrophic.

Is there any hope to be had?

I think that the best thing about democracy is that it works. The worst thing about democracy is that it works. If you vote for fascism, you get fascism, which is what happened in 2016. The only cure that I see for this is for the Democrats to wake up and go to the polls and vote and remove every single Republican from every level of government from public office, and install Democrats, who are pro-choice.

“This is basic medical care for women.”

As states continue to whittle away protections for various types of abortion, how do you respond to critics of late abortion?

These are some of the most desperate situations. A very large portion of my patients are a desired pregnancy who’ve learned very late in pregnancy that there’s a catastrophic problem with the pregnancy—a complication that may threaten their lives more immediately than the normal risks of pregnancy, which are considerable, and they have a fetus with a catastrophic abnormality that can’t survive. These abortions done at this stage are very, very essential.

Many times you have other situations: women who are in abusive relationships, being threatened or receiving violence; those who are very, very young, 10, 11, 12 years old, who have been raped or sexually abused by members of family, and they can hardly understand what’s going on. These women need to have abortions at a later stage of pregnancy.

This is basic medical care for women. If somebody doesn’t like abortion, they just shouldn’t have one. I think that this is a cruel and stupid outrage that the Republicans are passing these laws. Outside this country, it is regarded as pure insanity.

What have you been doing to train younger doctors? What does the next generation of abortion care look like?

I have a young doctor working for me, who has been with me for several years now. He’s really superb, a very skilled surgeon and a very good doctor. I’m training another doctor who actually started with me last year, and then was out on maternity leave for a while, now she’s back. She’s working part time, and we’re working toward having her work more full time.

And another doctor wants to come work for me. I’m getting calls. Obviously, some of the doctors who were seeing patients in other states are now out of a job because of these stupid laws. I love to teach, and I need to teach other doctors how to do this.

Do you anticipate that the doctors you mentioned who are out of work will relocate to legal states?

I’ve seen two doctors in the last few years who are sort of refugees from Texas. They were doing abortions in Texas, and they had to leave, because what they were doing became illegal in Texas. I’m hearing stories now all over the country of doctors who want to help patients and can’t because the states where they live have made it illegal to do so.

Do you have any plans to retire?

Retire? What does that mean? How do you spell that? Does that mean like getting new tires for your car, or what?