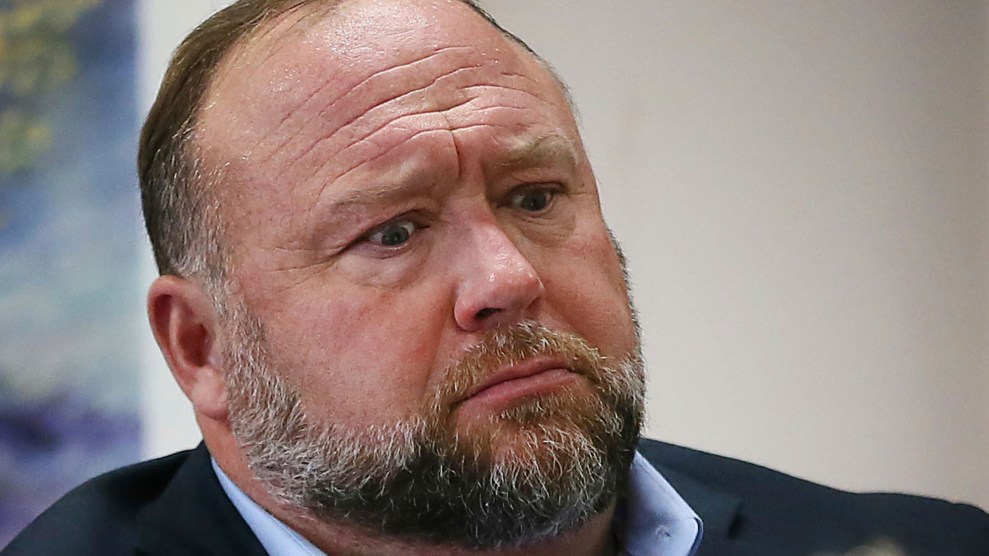 An Austin, Texas, jury on Friday found that conspiracy theorist Alex Jones must pay Sandy Hook parents $45.2 million in punitive damages for broadcasting defamatory claims that the 2012 school massacre was a government plot—and that the parents were in on the operation. That was on top of a separate set of compensatory damages issued this week, totaling $4.1 million.

The long-awaited ruling came after Jones, the founder of InfoWars, was found liable last year for defaming the parents, and it represented the first climax of three such hearings to assess how much Jones owes his victims.

But along with the other future hearings, Jones could soon be embroiled in another high-stakes legal drama after his lawyers in the defamation case mistakenly sent an enormous trove of his personal phone data to the legal counsel … for the Sandy Hook parents. This jaw-dropping development produced considerable courtroom drama—as my colleague Abigail Weinberg documented on Wednesday (watch to see Jones’s reaction happen in real-time). It also opened a surprise door for investigators working for the January 6 commission, which is trying to piece together how the Capitol Insurrection was potentially coordinated among a band of far-right operatives and extremists.

News quickly broke that the committee was preparing to issue a subpoena for the data, which apparently consists of two years’ worth of texts. Mark Bankston, a lawyer representing the parents, told the Texas court he was now in the possession of “intimate messages with Roger Stone”—the Trump-aligned operative—and that he was prepared to hand the cache over if the judge, Maya Guerra Gamble, cleared the way. She did just that on Friday. As Mother Jones has previously reported, Stone has multiple connections to a group of Oath Keepers, the far-right militia accused of helping to orchestrate a plot to disrupt the 2020 presidential election. (Both Stone and Jones have maintained they played no role in promoting violence.)

So, what would investigators be looking for exactly? Bankston doesn’t know. “We certainly saw text messages from as far back as 2019,” he said. “In terms of what all is on that phone, it’s going to take a little while to figure that out.”

But here’s what they might be looking for. The committee has already sought documents from Jones. Last year, he sued the committee in an effort to stymie a subpoena for communications that sought to illuminate how Jones knew, as early as January 3, about potential plans for Trump to meet a group of rally-goers who were planning to march to the Capitol after the president’s now-infamous speech at the Ellipse. Jones was a big promoter of Trump’s big election lie, and he was publicly saber-rattling on January 5th, the eve of the attack: “We have only begun to resist the globalists,” he told a crowd in DC. “We have only begun our fight against their tyranny.”

In a separate video posted on January 6, Jones is seen working up the crowd outside the Capitol. “Trump is going to speak over here,” he is heard saying. “Trump is coming.”

Having been thwarted thus far, the committee must be pinching itself about the possibility of seeing any texts that might reveal any level of active coordination between Jones, Stone, and other prominent operatives and far-right extremists—and, of course, any connections to the White House itself.

Alex Jones took the 5th more than 100 times when he testified in front of the January 6 Cmte.

Imagines what's in his text messages, which are likely to land in the hands of committee investigators & DOJ promptly.

But even as the committee pursues this line of investigation, it’s important to remember this point made by my colleague, Washington D.C. bureau chief David Corn: There may well have been collusion between the various bad actors, the alleged seditionists, and maybe even Trump himself. But if there’s no smoking gun in these texts, or elsewhere, Trump isn’t off the hook:

It remains a possibility that the White House was in cahoots with the extremists, perhaps egging them on to cause chaos on January 6 that would impede the certification of the electoral vote count—which, at that time, was what Trump desired… Yet if these two dots—Trump and the insurrectionist paramiltarists—are not connected, that does not absolve Trump… Conspiring with the Oath Keepers and Proud Boys would be merely one more offense on a tall pile. It could expand his legal liability. But it’s a subplot in a tale already fully established: Trump attempted to subvert the constitutional order to retain power… There’s no need for a smoking gun—or to get hung up on a particular allegation or possible criminal violation. The question is no longer Trump’s guilt but how best to counter the threat he continues to pose to the republic.